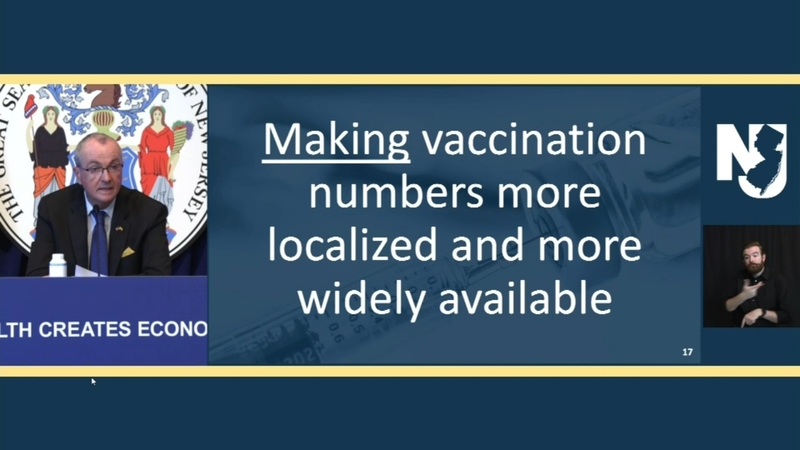 Vaccination rates in these NJ communities are lagging, state says

TRENTON, New Jersey (WPVI) -- As New Jersey prepares to move ahead with its reopening plans, including the elimination of some restrictions later this month, the state says there are still some large towns and cities that are falling behind when it comes to vaccinating residents.

During a news conference on Monday, Gov. Phil Murphy highlighted 16 communities with populations over 10,000 that have fewer than 40 percent of residents with one dose.

Murphy said having the numbers out there is important to "ensure everyone is working and pulling together."

"This is not going to be a competition between towns and communities, or meant to shame any community," Murphy said.

So far, according to the Centers for Disease Control and Prevention, 37% of the state's adult population has been fully vaccinated.

That's higher than the 31.6% of the country overall.

Murphy has promised to get 70% of the adult population fully vaccinated by June 30. Health Commissioner Judy Persichilli has said the state would meet that goal.

Also on Monday, as part of an effort to boost vaccination demand, he announced that about a dozen breweries across the state will offer people a free beer if they bring their vaccination card in showing they got their first shot in May.

New Jersey will lift many COVID-19 capacity limits at retail stores, restaurants, gyms and other businesses - and will remove a hard cap on outdoor gatherings - beginning May 19.