NJ diner saved, on the move 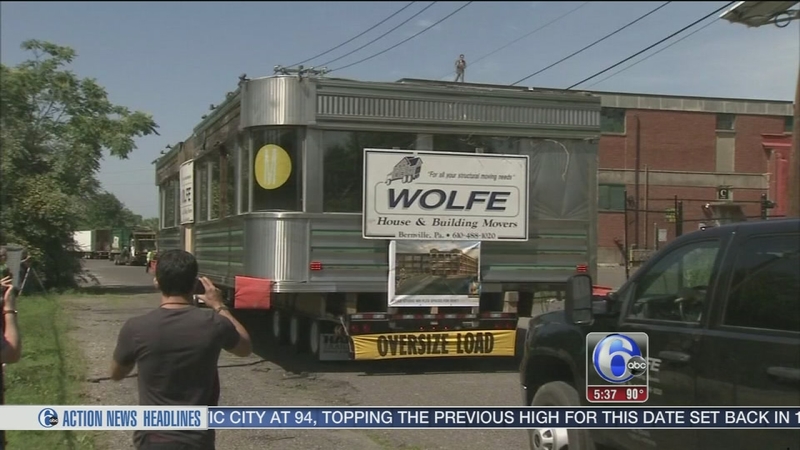 A beloved Mercer County diner destined for the dump is getting a second chance to shine.

Instead of dishing out piping hot plates of hash, it will be serving up food for the brain.

Marcia Minunni choked up seeing the old diner her grandparents owned for 40 years being moved from Lawrence to a new resting spot in Hamilton Township.

"I want to see it when it's full life again because I saw it when I was six and on up and lived most of my early childhood in that," Minnuni said.

The decaying 30-ton vintage diner was moved from its spot along Route 1 to Hamilton, where it will become part of Mill One, a project to restore and develop an old factory building.

"Got everything lined up and we put jacks under it and raise it up, high enough to get wheels under it. In this case, it's just an extendable trailer we back in under it," John Mark Witmer of Wolf House & Building Movers said.

"There were a lot of people who were after the bits and pieces of the formed aluminum work, but we wanted to preserve the whole thing intact," David Schrayers of the community development organization Isles, Inc. said.

Isles, Inc. hopes to turn it into a vocational training site.

The old diner was offered for free, you just had to pay to move it.

The estimated cost? About $30,000, paid for by Modern Recycled Spaces which is developing Mill one.

"Somebody obviously put a lot of time into designing it, building it, keeping it in place, even though it's in pretty bad shape right now and needs a lot of work it, it would be a crime to destroy that," Danny Popkin of Modern Recycled Spaces said.

Isles is trying to raise the estimated $100,000 cost of restoring the old diner, a fixture first in Trenton, then along Route 1 for decades.

"Just so happy you're going to bring it back to life," Minnuni told the movers.