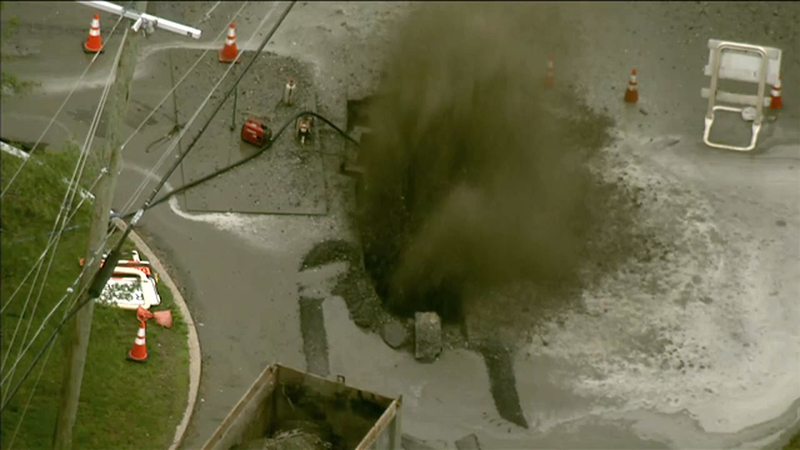 WINSLOW TWP., N.J. (WPVI) -- Homeowners will be allowed to return to their homes after an air quality test is done following a gas leak in Winslow Township, Camden County.

It happened near the intersection of Egg Harbor Road and East Fleming Pike Tuesday.

"I heard something like a big compressor went off," resident Joe Ross.

It turns out, what Ross heard was natural gas spewing from a ruptured main just a few feet from his home on Egg Harbor Road in Winslow Township right around 11:15 a.m. Tuesday morning.

Authorities say contractors who were working on the roadway struck the 6-inch main.

Gas leak forces evacuation of homes in Camden County. Video from the scene on May 14, 2019.

The rushing gas sent groundwater and debris spewing into the air for a few hours, but Ross says he didn't stick around for the spectacle.

"Police officer came up and said you're going to have to evacuate. So, I went in. My wife was just getting out of the shower. We were supposed to go to a graduation at Rowan University. That didn't happen. We just grabbed the dog and we just left," said Ross.

The gas leak also resulted in the recently re-opened Atlantic City Rail Line Service to be suspended for about two hours as a precaution.

The leak was finally contained after 3 p.m., but it will still be a while before the main is fully repaired and the surrounding roads are reopened.

Officials are also taking every precaution to make sure the leak is fully secured.