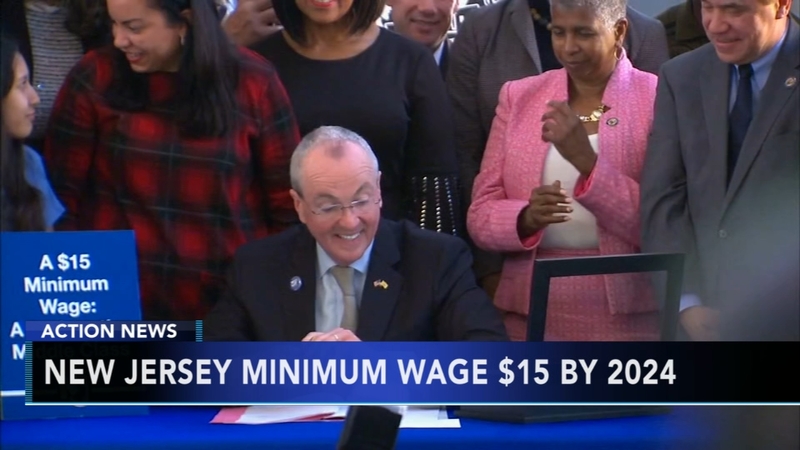 ELIZABETH, N.J. -- New Jersey became the latest state on Monday to boost its hourly minimum wage to $15 after Democratic Gov. Phil Murphy signed into law a measure phasing in the higher rate over five years.

Murphy signed the bill alongside Lt. Gov. Sheila Oliver and Democratic legislative leaders at a raucous event in Elizabeth where advocates cheered, "Ready for 15," carried banners with their union affiliation and applauded loudly once the bill was signed.

"It is a great day to make some history for New Jersey's working families," Murphy said. "And that's just what we're going to do. We've talked long enough about putting New Jersey on a responsible path to $15 an hour minimum wage. Today we start our way on this path."

New Jersey joins California, Massachusetts, New York and the District of Columbia in phasing in the higher rate. The $15 wage is a prominent policy goal of left-leaning groups, as well as the fulfillment of a key campaign promise by Murphy.

The governor, Senate President Steve Sweeney and Assembly Speaker Craig Coughlin announced a deal on the higher wage last month following yearslong efforts by left-leaning groups and unions in the state to raise the wage.

Republican Gov. Chris Christie vetoed a similar bill in 2016 to raise the wage.

Republicans and many businesses testified during hearings that the higher wage will increase costs and hurt commerce. On Monday, Republican senators raised concerns that it would lead to businesses laying off workers and moving to automation.

Others worried that if a recession hits, the high wage could be untenable for businesses.

"The amount of job loss that we are going to see among small businesses will be tragic," state Sen. Declan O'Scanlon said in a statement.

In an interview, Murphy, the former Obama administration ambassador to Germany, dismissed concerns over automation and said he hasn't seen evidence a higher minimum wage correlates to jobs lost because of artificial intelligence or automation.

He also acknowledged that raising the minimum wage too high too fast could hurt the state's economy, which is why the measure phases it in, he said.

"I start from the basis that you've got full-time work earning poverty wages in 2019 in New Jersey," he said. "There's no excuse that could justify this."

Farm workers' wages will climb to $12.50 over five years, for example. Workers for small businesses and seasonal employees will see their minimum wage reach $15 an hour only in 2026. Tipped workers, who currently have a minimum hourly wage of $2.13, will see it climb to $5.13 an hour by 2024.

The new law comes as the 2020 presidential contest begins to take shape, with Sen. Cory Booker of New Jersey announcing last week his plan to compete in the Democratic primary next year.

Oliver, the lieutenant governor, implored those assembled Monday to push for a higher minimum wage as part of the next election, eliciting one of the loudest applauses of the day.

"I don't want you to forget 2020 because we need a federal minimum wage (increase)," she said.

A constitutional amendment that raised the minimum wage and requires it to climb with inflation went into effect in 2013 in New Jersey. Once the wage reaches $15 in 2024, it will continue to climb based on the consumer price index because of that amendment.
-----
Follow us on YouTube
Send a News Tip to Action News
Learn More About 6abc Apps
Report a correction or typo
Related topics:
societynew jersey newsminimum wage
Copyright © 2021 by The Associated Press. All Rights Reserved.
MINIMUM WAGE
CVS will raise its minimum wage to $15 an hour
Delaware to raise minimum wage to $15/hour by 2025
Bill to raise Del. minimum wage to $15 headed to governor
Bank of America will raise minimum wage to $25 by 2025
TOP STORIES
Man admits to throwing wife's body out of plane after killing her
Zach Ertz makes history in first game with Arizona Cardinals
Students 'afraid to go to school' as Philly gun violence escalates
Driver smashes into cars, fence in fiery Bucks Co. crash
AccuWeather: Record warmth and Flash Flood Watch
Supply chain issues expected to impact holiday shopping
Crew member: Baldwin was careful with guns before fatal shooting
Show More
Philadelphia police investigate deadly shooting near Wendy's
Philly police searching for missing 13-year-old
SEPTA union authorized to call strike: Here's what happens next
Insomnia Cookies scaring up Halloween treats at its CookieLab
'Be Kind:' New Jersey 4th graders create thankful rocks
More TOP STORIES News