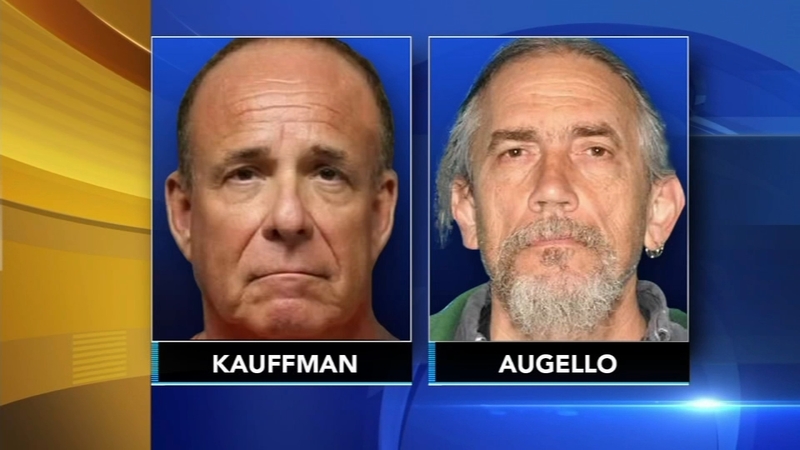 MAYS LANDING, N.J. (WPVI) -- The bizarre case of a New Jersey doctor accused of having his wife killed to protect an illegal prescription drug ring he was running with an outlaw biker gang grew even more strange Thursday as prosecutors revealed the doctor has himself become the subject of a murder plot.

James Kauffman, 68, of Linwood, New Jersey, and four of six other defendants appeared in court Thursday via video. He is charged with numerous offenses, including murder, racketeering and weapons offenses.

Kauffman and co-defendant Ferdinand Augello, 61, of Petersburg, New Jersey, are charged with murder in the death of Kauffman's 47-year-old wife, April, a radio talk show host who was fatally shot in her home in May 2012.

The charges were announced Tuesday after more than five years of investigation.

VIDEO: James Kauffman, a suspect in the killing of his wife, April, appeared in court on January 11, 2018.

On Thursday, following brief initial court appearances, prosecutors revealed that Kauffman has been moved from the Atlantic County Jail in Mays Landing to the Hudson County Jail in Kearney, nearly 100 miles away, for his protection.

Atlantic County Prosecutor Damon Tyner said Augello discussed a plan to have Kauffman killed before he could come to trial. Authorities filed an additional charge of conspiracy to commit murder regarding the alleged plot against Kauffman.

Scott Sherwood, a public defender representing Augello, did not immediately respond to a request for comment Thursday.

"We're saying what we've been saying for the past few years: He's not guilty," Barbone said.

On a video link with the judge, Kauffman did not speak other than to reply "yes" several times when asked if he understood his legal rights.

April Kauffman was a businesswoman who hosted weekly radio talk shows and advocated for military veterans. She had received a governor's award for outstanding community service a few days before her death.

Authorities say Kauffman arranged for his wife's murder to keep her from divorcing him in 2011 and exposing a lucrative drug distribution ring he was running with the Pagans Outlaw Motorcycle Gang through his endocrinology practice in the suburbs outside Atlantic City.

Tyner said Kauffman told Augello about his wife's threats and solicited him to have her killed. After about a year, a man who agreed to do it, Francis Mullholland, was driven to the home, where the doors were left open, and was given a gun, authorities said. April Kauffman was shot twice, and her body was found by a handyman.

Tyner said Mullholland, who got about $20,000 in cash, was later found dead of a drug overdose.

Prosecutors said the drug empire lasted until June 2017, when Kauffman was arrested on weapons charges at his Egg Harbor Township office. Authorities said he brandished a handgun as agents executed a search warrant and said, "I'm not going to jail for this!" A hostage negotiator persuaded him to surrender.

Kauffman's license was suspended after his arrest.