Polls opened at 6 a.m. and will close at 8 p.m. New Jersey and Virginia are the only states electing governors this year.

Watch Part 1 of the New Jersey Gubernatorial Debate on October 10, 2017.

Murphy has racked up a double-digit lead in polls and cast himself as a check on unpopular Republican President Donald Trump and pinned his campaign on Christie's low approval ratings . He has linked Guadagno to Christie at nearly every opportunity.

Trump lost New Jersey last year by 14 points and Christie's image suffered a downgrade after the 2013 George Washington Bridge lane-closing scandal and a failed presidential run that saw him frequently leaving the state to campaign.

That coupled with New Jersey's nearly 900,000 Democratic voter registration and a huge cash advantage has Guadagno running as an underdog in a state that she helped govern as Christie's deputy for the past eight years.

After voting Tuesday, Christie said the election was not about him.

Christie said he voted for Guadagno.

Her campaign has focused almost entirely on her promise to lower property taxes, but recently she has steered into a discussion on immigration policy calling for a ban on sanctuary cities.

Murphy, 60, is a wealthy former Goldman Sachs executive who loaned his primary campaign $16 million. He led the firm's operations in Hong Kong and Germany before President Barack Obama tapped him to serve as the United States' ambassador to Germany in 2009. He has never held elected office before. Murphy is a resident of Middletown in Monmouth County.

On the issues, Murphy has promised to establish a public bank of New Jersey and has prioritized school, pension and transportation funding. He says he would legalize and tax marijuana as well as re-institute a Jon Corzine-era millionaires tax to help finance his promises.

Guadagno's central plan has been a cap on the school portion of property taxes of 5 percent, limited to a $3,000 credit. She promises to pay for it through an audit of state government.

Christie supports Guadagno's effort, but has not appeared on the trail with her. He has said he would if asked, but had not been requested to stump for her.

Christie has seen his job approval ratings transform, from a high after Superstorm Sandy when he got good grades for handling the fallout of the fatal storm just before Election Day in 2012, to his record-low approval in the year after the presidential contest. 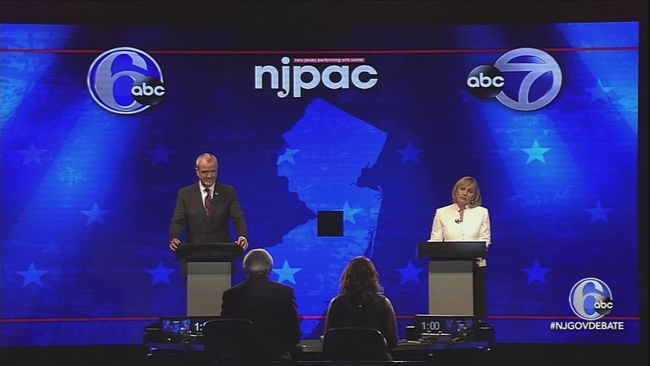