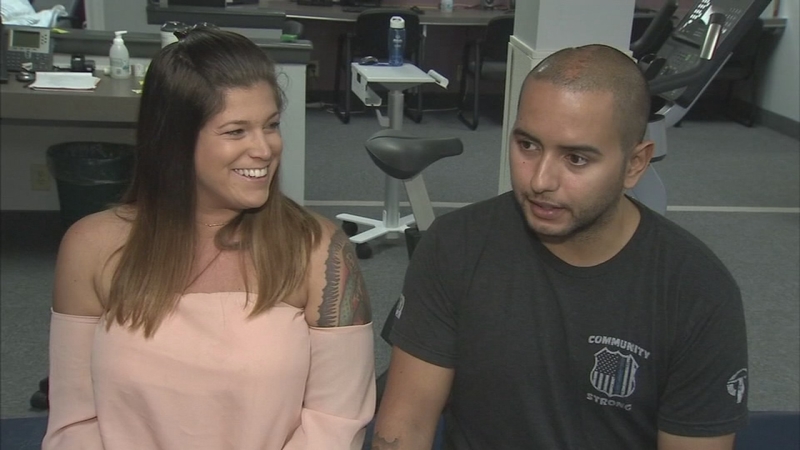 ATLANTIC CITY, N.J. (WPVI) -- A former Atlantic City police officer has spent the past year fighting to get his life back after being shot in the line of duty.

Josh Vadell took a bullet to the head, but today he's walking, talking and thankful to be alive.

"I still don't believe it myself that a year ago I almost died," he said.

Josh Vadell was shot in the head last September while responding to a robbery near the parking garage at Caesars. He remembers the moment.

"The first gun shot, and then feeling weakness, and then I remember my partner returning fire," said Vadell.

"They weren't sure if he was even going to make it through the night," said his wife, Laura Vadell.

The dad of three girls spent two weeks in ICU, and has had five surgeries, including one to install a plastic plate to replace his shattered skull.

Initially paralyzed, Vadell now has limited vision and mobility on his left side and has been doing intense physical therapy at Moss Rehab where he's making amazing progress.

"The stronger I get in my arm and my leg the better I start to feel. I'm starting to get my confidence back," Vadell said.

The physical therapy has been grueling, and Josh said there were plenty of times he wanted to give up. His wife and kids are what kept him going.

"He forgets sometimes how well he's doing, and I save pictures and videos and he's able to see how much progress he's made," Laura said.

Things have improved so much Laura plans to go back to school to finish her bachelor's degree while Josh stays home with the kids. He retired from the police force in July and wants to be a motivational speaker

"Everybody has the will within them to fight they just have to dig down deep and find it," Vadell said.