Hundreds of New Jersey bridges in need of repair 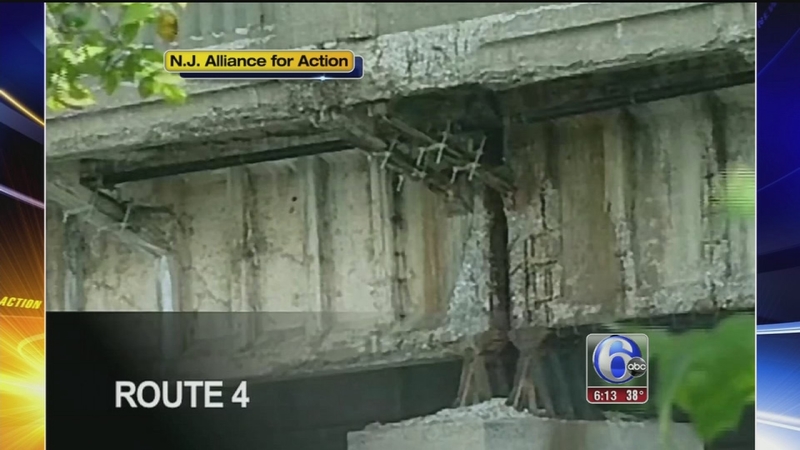 VIDEO: Hundreds of New Jersey bridges in need of repair

TRENTON, N.J. (WPVI) -- Well over 600 bridges in New Jersey are structurally deficient - some so bad they've been shut down like the one on Nottingham Way in Hamilton.

The transportation trust fund, used to finance bridge and road repairs, will be out of money soon.

A coalition of groups called 'Forward New Jersey' is urging lawmakers to find a way to pay for desperately needed infrastructure improvements.

"This is a huge economic negative to the state but probably more than that, this is a safety issue. Every single person in New Jersey, because of the condition of our bridges and roads, is at risk," said Tom Bracken, Forward New Jersey.

One way to raise the money would be a hike in the state gas tax.

As you can imagine, the idea of paying more for gas is not very popular with some people who've been enjoying rock-bottom prices at the pump lately.

"I think we pay enough in taxes now. There should be another avenue they can find the revenue from," said John Mollinary.

"If they go any higher than nobody can afford to travel or go anywhere they need to go," said Ellen Santiago.

Forward New Jersey estimates a 10 cent hike in the gas tax would cost an average family $50 a year.

Since almost a third of all gas sold in New Jersey is to out-of staters, they would help pay for aging bridge and road repairs.

"I think the gas tax should be raised to pay for infrastructure and by paying for it by the gas tax, those who are using the roads are those paying for it," said Linda Pickering.

The situation is serious enough that even Gov. Christie, who has resisted raising the gas tax, now says everything is on the table.