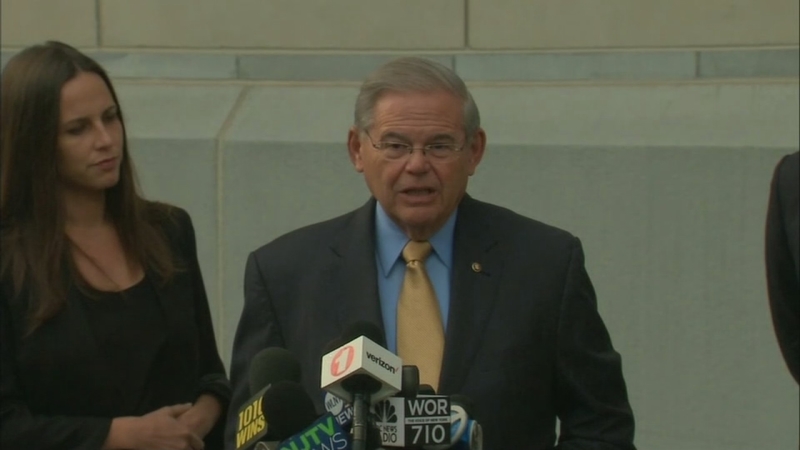 Menendez's attorney responded in his opening statement that gifts from Florida ophthalmologist Salomon Melgen, Menendez's longtime friend, didn't equate to a bribery agreement. Menendez's meetings with government officials - though they could have aided Melgen's business interests - were "what members of Congress do" and were meant to influence future policy, he said.

Menendez and Melgen were indicted in 2015 and face multiple fraud and bribery charges in a case that could threaten Menendez's political career and potentially the makeup of a deeply divided U.S. Senate if he's convicted.

Both men have pleaded not guilty. Menendez said before entering the courthouse Wednesday: "Not once have I dishonored my public office."

Justice Department attorney Peter Koski described Menendez pressuring government officials to help Melgen with securing visas for his foreign girlfriends and intervening in a lucrative port security contract in the Dominican Republic and a multimillion-dollar Medicare dispute. Individually and through his company, Melgen also contributed hundreds of thousands of dollars to Menendez's legal defense fund and entities that supported his re-election.

Many of Menendez's meetings and interactions with the officials occurred in proximity to Melgen's donations or trips by Menendez he paid for, Koski claimed.

Abbe Lowell, representing Menendez, began his statement discussing the two men's friendship, which dates back to the early 1990s, and said "acting out of friendship is not a crime."

Similarly, Menendez's interest in port security in the Dominican Republic stemmed from a concern that potential U.S.-supplied screening equipment wouldn't be used correctly, he said. A company Melgen owned had a long-running contract dispute with the Dominican government over port security equipment.

Lowell attempted to blunt the government's case by displaying a chart that showed alleged bribes by Melgen in 2006 but not alleged official acts by Menendez, and alleged acts but no alleged bribes in 2009.

"A bribery case is not a mix-and-match event," he said.

Melgen's attorney echoed Lowell's central contention that there was no corrupt agreement between the men as he began his opening statement at the end of the day and will resume Thursday morning.

Flanked by his two adult children and at times choking back tears, Menendez said outside court Wednesday: "I started my public career fighting corruption - that's how I started - and I have always acted in accordance with the law.

"And I believe when all the facts are known, I will be vindicated," Menendez said.

Menendez is up for re-election next year. If he is convicted and steps down or is forced out of the Senate by a two-thirds majority vote before Gov. Chris Christie leaves office Jan. 16, the Republican governor would pick a successor. A Democrat has a large polling and financial advantage in November's election to replace Christie.

Menendez said he plans to be at the trial daily but will decide whether to return to Washington to cast votes in the Senate based on the issue and whether his vote could make a difference. The judge last week ruled against an attempt by Menendez to pause the trial on days when important Senate votes were scheduled.

Republican Ted Stevens of Alaska was the last sitting U.S. senator to go on trial. His conviction was overturned after a Justice Department investigation concluded prosecutors had committed misconduct.

Democrats in New Jersey, including junior U.S. Sen. Cory Booker, have stood by Menendez. Booker was in court on Wednesday to support him.

Among the gifts prosecutors say Melgen gave Menendez were flights on Melgen's private jet, vacations at Melgen's private villa in the Dominican Republic frequented by celebrities like Beyonce and Jay Z, and a three-night stay at a luxury Paris hotel valued at nearly $5,000.

Menendez, New Jersey's senior U.S. senator, later lied about the trips on Senate disclosure forms, Koski said. Lowell responded that Menendez later reimbursed about $58,000 even though it was money "he probably didn't have to pay back at all" under Senate finance rules.

Melgen's sentencing in a separate Medicare fraud case has been delayed until after his trial with Menendez.

Along with picking three more jurors needed before opening statements could begin Wednesday, the morning featured some sparring between attorneys for Menendez and Judge William Walls.

Walls chided defense attorneys for filing a motion on what to include in jury instructions at the end of the trial.

When attorney Abbe Lowell pointed out that the motion was filed according to the judge's order from December, Walls replied, "Fine. Bill me."