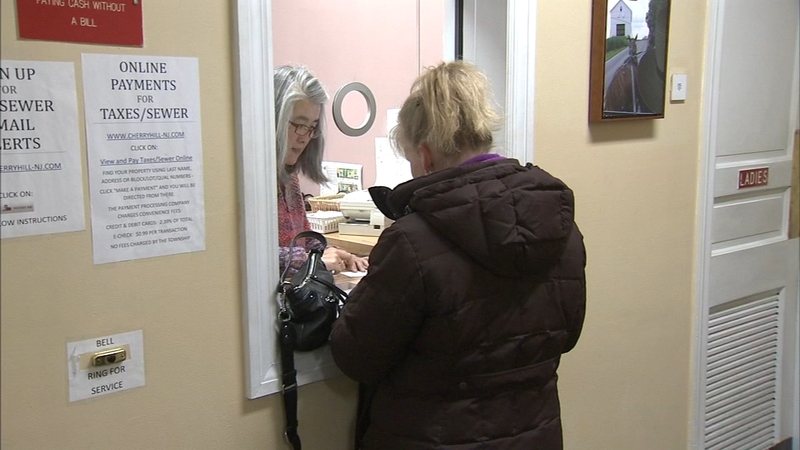 HADDONFIELD, N.J. (WPVI) -- In Haddonfield, New Jersey several hundred people have been flocking to the tax collector's office to pay their 2018 property taxes before the new year kicks in.

Former Mayor Jack Tarditi said, "So I don't get clocked as much as I'm gonna get clocked on the change of the taxes."

Tarditi says for people in New Jersey, who pay among the highest property taxes in the country this is bad news.

"It's unfortunate that there wasn't enough thought to how this is gonna affect people in states like New Jersey, New York, Connecticut and California, and it's gonna be a disaster," Tarditi said.

In Cherry Hill, Steve Urich was among those paying early before the cap takes effect.

He said, "I have a couple properties, I have a second home so that's why I wanted to pay it ahead or I would lose probably a $6,000 deduction."

First of all, as a matter of principle, some people will tell you

"I never feel good about taxes."

And having to pay them early to qualify for the full deduction adds insult to injury.

"It's gonna affect my taxes greatly, this is not fair, our taxes are a lot higher than $10,000," Wendy Stuessy of Cherry Hill said.

Jeanne Lleneado of Haddonfield added, "It's lucky for me that I have enough savings to accommodate for this, but unfortunately some other members of my family and friends, and relatives do not have the ability to pre-pay."

"Obviously it's a cash flow issue but at the same time, I think you need to take advantage of the current situation which allows you to deduct taxes in 17 but not in 18," Brian Hughes of Haddonfield said.

In Cherry Hill, the tax office will be open on Saturday from 9 a.m. to noon to allow people extra time to pre-pay.

And the tax collector in Haddonfield reminds everyone to contact their mortgage company if their taxes are being escrowed.

Haddonfield Tax Collector Terry Henry said, "Let them know that they pre-paid so it doesn't double up cause the mortgage company is still taking out the escrow payment."