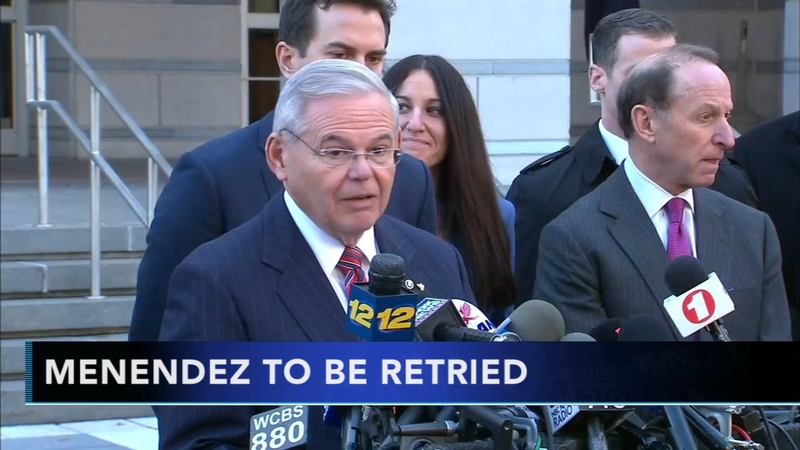 NEWARK, N.J. -- U.S. Sen. Bob Menendez might spend 2018 asking voters to re-elect him and jurors to acquit him.

Prosecutors from the Department of Justice told a federal judge in New Jersey on Friday that they will seek a retrial of the Democratic senator, whose 11-week corruption trial ended in a hung jury in November. The filing to the judge seeks a retrial "at the earliest possible date."

Menendez and co-defendant Salomon Melgen have pending requests to dismiss the charges based on what they called the prosecution's inability in the first trial to show connections between Melgen's gifts to Menendez and the senator's meetings and conversations with government officials, which are at the heart of the bribery charges.

And the government asked the judge Friday to not allow what it called the defense's comments that "politicized and racialized" the first trial. Both Menendez and co-defendant Salomon Melgen are Hispanic.

Defense attorneys in their opening statements and closing arguments during the first trial "made baseless accusations of racial animus on the part of the Government," that invited the jury to consider the defendants' ethnicity and political affiliation in resolving the charges against them," prosecutors wrote.

The government also said jurors should be kept separate from a hallway outside the courtroom where Menendez occasionally prayed with clergy members during the first trial.

After Friday's announcement of plans to seek a retrial, Menendez's office released a statement saying he would be "vindicated - again."

"We regret that the DOJ, after spending millions and millions of taxpayer dollars, and failing to prove a single allegation in a court of law, has decided to double down on an unjust prosecution," the statement said.

Menendez and Melgen, his longtime friend, were charged in 2015 with a bribery scheme in which Menendez allegedly traded political favors for gifts and campaign donations. Menendez also was charged with making false statements on his Senate financial disclosure forms.

Menendez, a former chairman of the Senate Foreign Relations Committee who has been in the Senate since 2006, is expected to run for re-election, though he hasn't officially announced his candidacy.

The first trial began the week of Labor Day and lasted until mid-November. Several jurors interviewed after U.S. District Judge William Walls declared a mistrial said as many as 10 of 12 members of the panel were in favor of acquittal.

Prosecutors had sought to tie gifts and campaign donations from Melgen to meetings and conversations Menendez had with executive branch officials on matters that would have benefited Melgen's business interests.

One such matter was a $9 million Medicare billing dispute involving Melgen's ophthalmology practice. Another was a dispute over port security equipment involving a company Melgen owned in the Dominican Republic.

Defense lawyers argued during the trial that Melgen's gifts, which included a stay at a luxury Paris hotel and free trips for Menendez on Melgen's private jet to his villa in the Dominican Republic, were an expression of the pair's longtime friendship and weren't bribes.

Daniel Petalas, a Washington lawyer and former prosecutor in the Justice Department unit that brought the Menendez case, said the government obviously feels confident about the strength of the case but may bring a more streamlined version the second time around.

"I think that they will be carefully reviewing what they thought happened, and trimming and cutting where they think it makes sense to," Petalas said. "And if that includes dropping charges, I don't think they'll be afraid of that."

In a separate case in Florida, Melgen awaits sentencing after being convicted last year on 67 counts of Medicare fraud that prosecutors say exceeded $100 million. They want a 30-year sentence, while the 63-year-old Melgen's attorneys are seeking a much shorter sentence and have argued prosecutors only proved he stole $64,000.