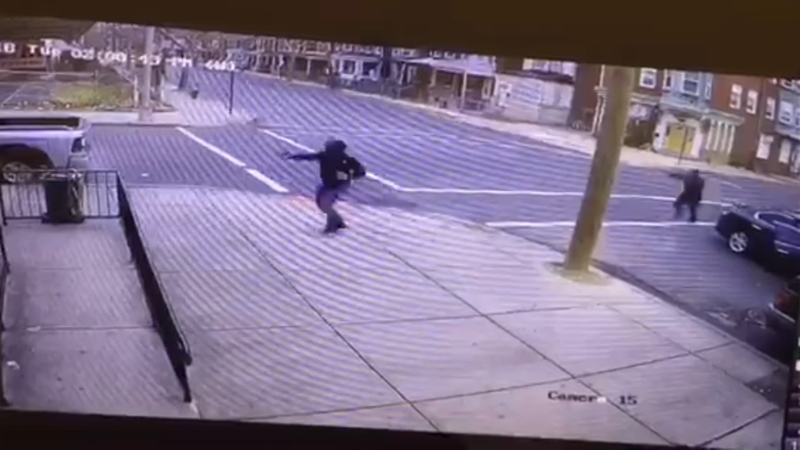 TRENTON, N.J. (WPVI) -- A Trenton community is on edge following the drive-by murder of a young woman who was shot multiple times outside a corner market.

The entire incident was caught on video.

One camera captures a black Nissan Maxima pull through the intersection of Stuyvesant and Hoffman avenues around 2:15 p.m. Tuesday.

Two men get out and immediately open fire.

Video from another camera shows the victim, 19-year-old Shaela Johnson, desperately trying to take cover inside the market, but she never makes it.

She's hit multiple times and collapses outside the door. Police say more than 20 rounds were fired.

At a news conference on Wednesday, city officials confirm the shooting was gang-related.

"Seems to be neighborhood violence, neighborhoods against other neighborhoods, almost turf wars," said Mayor Reed Gusciora.
Officials say they believe Johnson was targeted. They also took the time to make a plea to young people not to give in to the pressures of gangs.

"There's a lack of hope. But there are alternatives. Stay in school take advantage of your education, recreational outlets," said Mayor Gusciora.

City leaders also hope someone will come forward with information to help them catch the killers.

They add that if residents want change in their neighbors they're going to have to work with police.

"There's a gap that exists between the community and the police and Trenton is not unique to that gap, but what we're trying to do is collaborate and build relationships with everyone we come into contact with," said Police Director Carol Russell. "We need to have the full cooperation of the residents and city and help us solve these crimes."

There have been no arrests in this shooting.