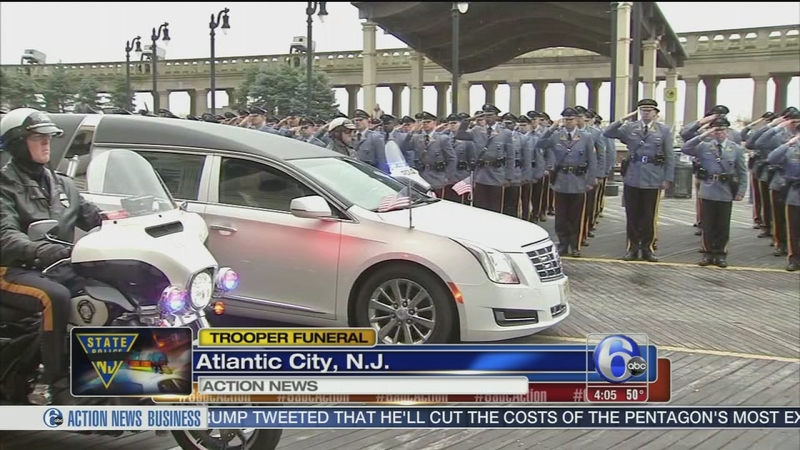 MAURICE RIVER TWP., N.J. (WPVI) -- Hundreds of law enforcement officers from around the country came to Atlantic City on Monday to pay their final respects to a New Jersey State Police state trooper killed in a crash.

It was a sad, gloomy day on the boardwalk as Trooper Frankie Williams was laid to rest.

Troopers and other law enforcement gather on the BW in AC to honor Tpr Frankie Williams, killed last wk in crash pic.twitter.com/apUtpnart5


After a viewing and funeral at Boardwalk Hall, attended by about 1,000, people Williams' hearse was driven past his fellow troopers and the members of law enforcement who came from near and far to pay their respects.

"Brothers and sisters. Doesn't matter where state line ends and begins, our state, the state of Texas, they send us all over the country," said Tpr. Aaron Lewis of Texas State police.

"It's very upsetting and we put ourselves in the same boots. I just want to show the same amount of respect to him as he would show to me," said Ptl. Shawn Ruiz of Toms River Police.

The 31 year old trooper from Egg Harbor Township was killed last Monday on Route 55 in Millville responding to a report of an erratic driver. That car crossed the median and hit Williams cruiser head-on.

"It's almost inconsolable grief on the part of the organization. This is the fourth member we've lost in about 18 months," said New Jersey State Police Superintendent Col. Rick Fuentes.

Trooper Williams was just married in September to his high school sweetheart, Kimberly. He was remembered as passionate, enthusiastic, and reliable.

Williams dreamed of becoming a state trooper, and had less than a year on the job.

"He meant everything to me. No matter what, he always had my back. It's just unbelievable," Trooper Carl Spinosa.

A photo of Tpr. Frankie Williams was handed out at the service . The photo fits inside a sleeve in troopers' hats, so they can remember him every time they put their uniform on.

In August, Williams responded to a parking lot in Pilesgrove Township after a person reported a Toy Poodle was inside a vehicle with one window open about an inch. The trooper saw the dog was lying on its side inside a crate and in obvious distress from heat stroke, state police said.