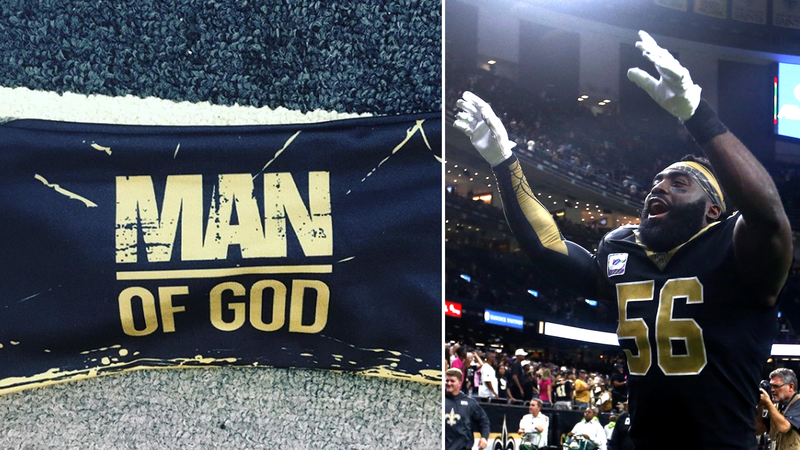 Saints' player won't be fined for "Man of God" headband

New Orleans Saints linebacker Demario Davis is turning a $7,000 negative into a nearly $40,000 positive that will likely go a long way to help others.

In Week 3 of the NFL season, Davis wore a headband that bears the words "Man of God" and was fined $7,017 for violating the dress code policy.

Under the NFL's rules, players are "prohibited from wearing, displaying, or otherwise conveying personal messages either in writing or illustration, unless such message has been approved in advance by the League office."

The rule later reads that "All such items must relate to team or League events or personages. The League will not grant permission for any club or player to wear, display, or otherwise convey messages, through helmet decals, arm bands, jersey patches, or other items affixed to game uniforms or equipment, which relate to political activities or causes, other non-football events, causes or campaigns, or charitable causes or campaigns."

On Sept. 28, Davis announced on Instagram he had been fined, saying that proceeds would benefit St. Dominic Hospital in Jackson, Mississippi.

"I accept the fine but the mission continues! Obstacles are made to be conquered and I'm here to serve," he wrote a few days later, noting that 100% of the proceeds would go toward the hospital.

In that short time, the movement has only grown.

On Tuesday, Davis shared a photo of students and teachers at St. Louis King of France school in Metairie, Louisiana wearing their own versions of the headbands.

He also revealed that his agent appealed the fine and they won. But instead of keeping the money, Davis said he would donate every penny of the $7,017 to St. Dominic Hospital.

If you want to help support the cause, the Saints' linebacker said that the headbands are back in stock in more styles that include the phrase "Woman of God," and now, "Child of God."

The NFL does offer an opportunity for athletes to support their favorite cause or passion during the season through the "My Cause, My Cleats" program, which was launched in 2016.