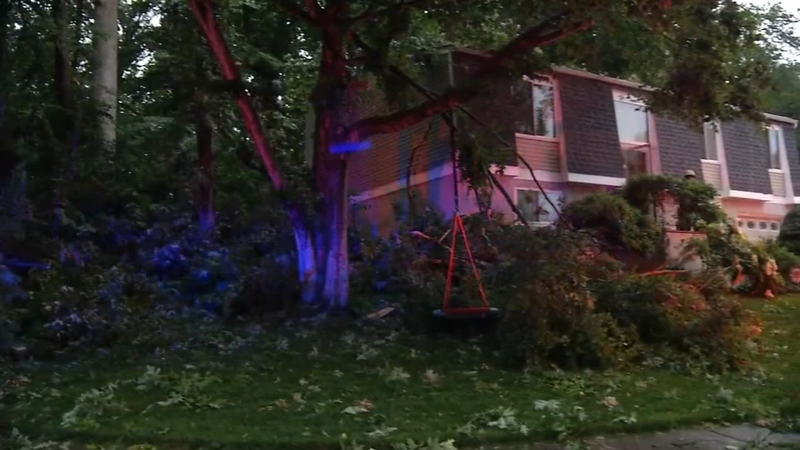 NEWARK, Delaware (WPVI) -- A woman was rescued after a tree crashed into her home during severe weather on Monday night in Newark, Delaware.

It happened around 7:14 p.m. on the unit block of Squirrel Lane.

The family - a grandmother, a couple and their two children, ages 4 and 1 - were inside of the home at the time.

INCREDIBLY LUCKY: A family of five was spared when a tree came crashing down through their roof and into their kitchen! (Newark, DE)

The grandmother was trapped by debris & extracted without serious injury by firefighters. @6abc pic.twitter.com/9gQ0CpEFkl

According to Deputy Fire Chief Jeff Sands with the Aetna Hose Hook & Ladder Company, rescue crews found a woman in her mid-60s trapped on the second floor of the home after the tree caused a partial collapse.

Liabeth Yohannes and her two children were standing in the kitchen area when the partial collapse occurred. The children were able to escape uninjured on the first floor.

"My daughter was in the perfect spot where everything fell right around her like a pyramid, and I was able to pull her out. My son was OK, he had minor scratches on his back," she said.

Crews were able to stabilize the collapse and safely pull the woman out. She is currently hospitalized in stable condition.

Sands called the damage to the home "pretty significant."