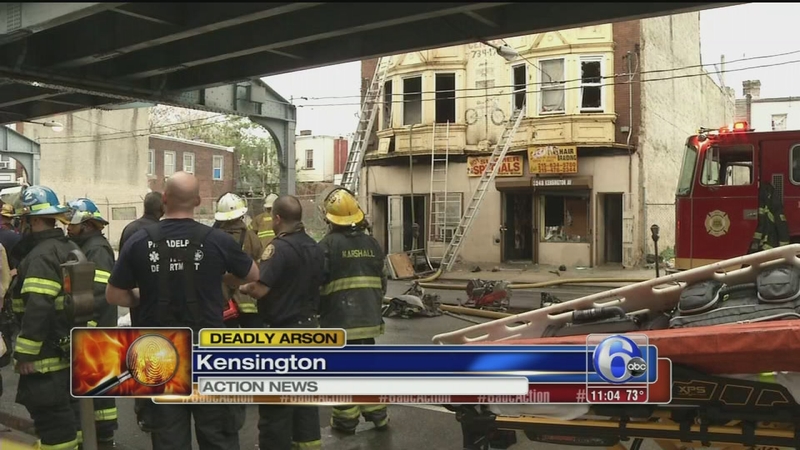 KENSINGTON (WPVI) -- The Philadelphia Fire Department says an incendiary device was used to intentionally ignite a fire in Kensington that left one person dead and four others hospitalized.

The investigation has now been handed over to the the Arson Taskforce, which includes members of the Philadelphia Police Homicide Unit, ATF agents, and the Fire Marshal.

Officials tell Action News the blaze broke out at 6:15 a.m. Monday in a 3-story boarding house on Kensington Avenue near Willard Street.

Residents say there was panic as the fire quickly spread.

The flames were fierce, the smoke thick.

As the fire advanced, residents looked for ways to escape from the building in the 3200 block of Kensington Avenue. Some crawled out windows to the back roof.

"I opened my door, black smoke came pouring in," Pascuzzo said. "I shut it quick and climbed out the side window onto the roof."

By the time firefighters arrived, three people had already jumped from the upper floors.

Medics took one man to Temple University Hospital in critical condition, where he later died. The 31-year-old had jumped from a window and died from injuries sustained from the jump.

A 21-year-old woman identified by neighbors as Heather Ridgeway suffered severe burns and was transferred to the burn unit at the Crozer Keystone Medical Center in Chester in critical condition.

Her daughter 3-year-old Marilyn Rosado, another child, and a man in his 60s also suffered minor injuries.

In all, Action News is told 18 residents lost their homes.

Investigators have determined an incendiary device was used to intentionally ignite the blaze and that an accelerant was poured on the stairs.

The fire commissioner said no smoke alarms were found in the building.

Alexis Rosado, who is the father of the little girl, says he was having relationship problems with her mother, the 21-year old, and was not home at the time.

"This is hell for me. I don't wish this on my worst enemy. This is not fair for no one," Rosado said.

The owner was on the scene speaking to fire investigators.