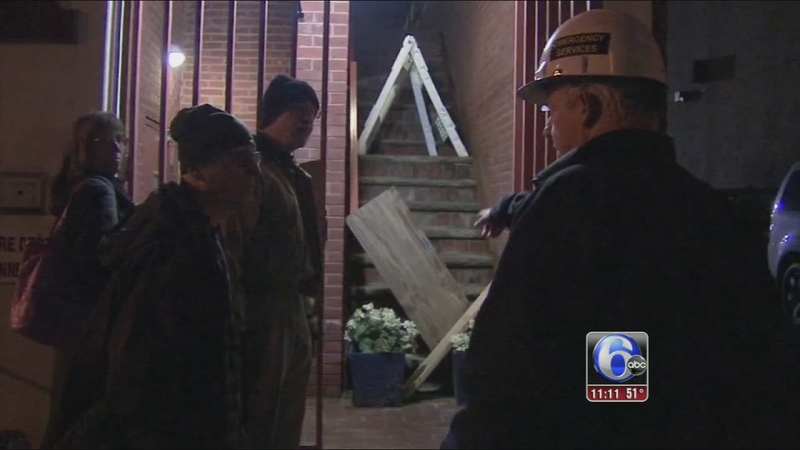 OLD CITY (WPVI) -- A man is hospitalized and five people are displaced after a stairway collapsed inside a building in the city's Old City section.

It happened after 6 p.m. Saturday along the 200 block of Church Street, near 2nd and Market streets.

Sky 6 was over the scene as fire and rescue crews responded to a report of a man trapped in a stairwell at Vestry Condominiums next to the historic Christ's Church.

The victim was taken to Jefferson Hospital for a leg injury. He is listed in stable condition.

The condo association president says the landing gave way as the senior citizen walked down the steps.

"I think he was wedged in with the bricks, and then somebody else was trying to pull him out, but he kept sort of sliding further down," said Vestry Condominium Association President Mark Goulian.

He eventually fell 8 feet to the ground. Fire crews used rope and a basket to pull him to safety.

"He was alert and oriented. He was in stable condition; appeared to have a leg injury," said Philadelphia Fire Department Battalion Chief Philip Lazar.

L&I inspectors evacuated the four-unit building and ordered the stairwell closed. One woman used a fire ladder to leave her home.

"Right now they have to find another place to stay for at least a couple days it looks like until they can get a good assessment on the building with an engineer," said Lazar.

Although surrounded by centuries-old buildings, the condos are relatively new having been built in 1980.

"I wasn't here when it was built but, I've heard the original builders cut corners and maybe this was one of them," said Goulian.