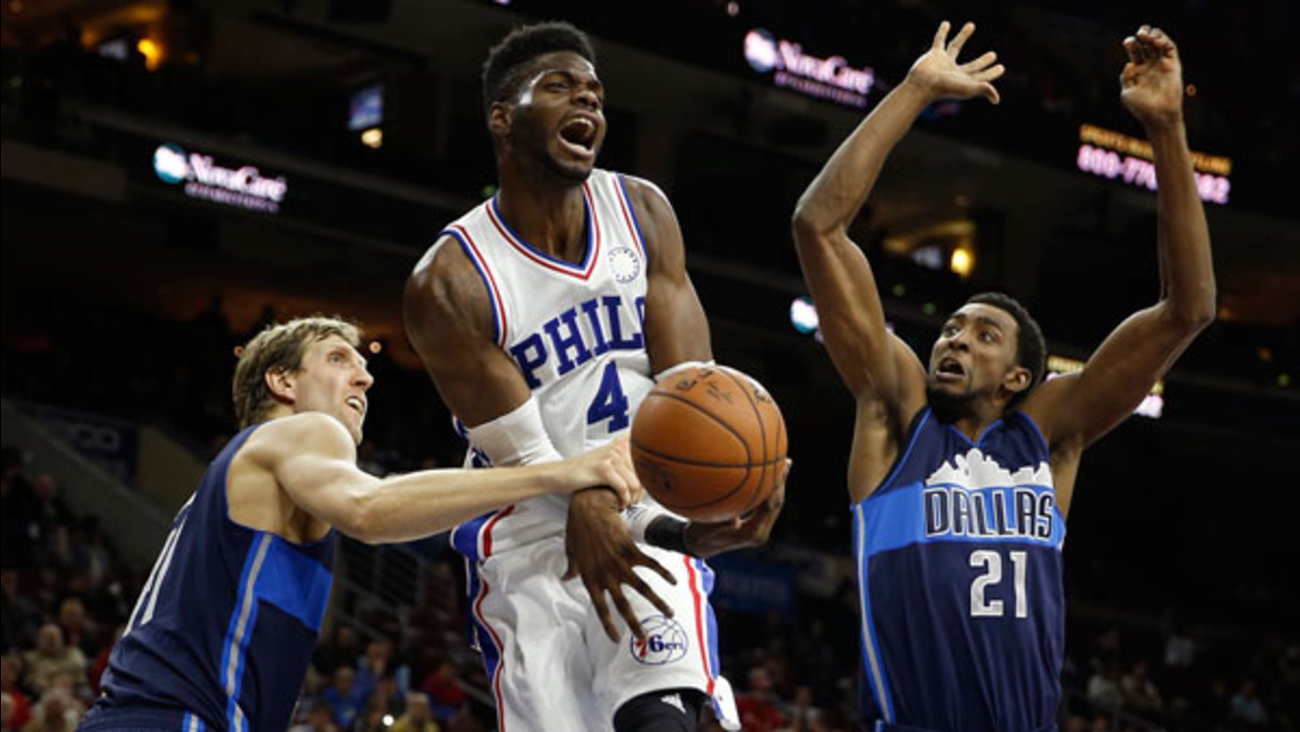 Philadelphia 76ers' Nerlens Noel (4) cannot get a shot off against Dallas Mavericks' Dirk Nowitzki (41) and Jeremy Evans (21) during the second half of an NBA basketball game. (AP Photo/Matt Slocum)

PHILADELPHIA (WPVI) -- Dirk Nowitzki scored 21 points, including seven during a pivotal stretch late in the fourth quarter, to lead the Dallas Mavericks to a 92-86 victory over the winless Philadelphia 76ers on Monday night.

Jahlil Okafor had 19 points and 11 rebounds for the 76ers, who have lost all 11 games this season and 21 in a row dating back to last season. Philadelphia's last win was March 25 at Denver, and the 76ers are within five defeats of matching the franchise's all-time record for consecutive losses.

Chandler Parsons added 20 points for the Mavericks, who needed a late push to hold off Philadelphia.

The 76ers trailed by as many as 19 points in the first half but battled back to take an 82-81 lead with 4 minutes, 23 seconds remaining on a free throw by Nerlens Noel before Nowitzki took over.

The 13-time All-Star tallied seven of nine Dallas points during a 9-2 Mavericks run over the next 2:36, ending with a 3-pointer that made it 90-84 with 1:47 left. The six-point margin was too much for Philadelphia to overcome.

Nowitzki returned to the lineup after sitting out, along with fellow starters Wesley Matthews and Parsons, to rest during the Mavericks' 110-98 victory at Houston on Saturday night. Matthews had seven points.

Noel had 12 points and 12 rebounds for Philadelphia.

Philadelphia's 0-11 start is six losses shy of tying the franchise mark, set last season, for most defeats to start a season.

Philadelphia bumbled its way to 15 points in a forgettable first quarter that ended with the Mavericks up 28-15. The typically small crowd rained down boos on the home team during one sequence midway through the period following consecutive turnovers by Nik Stauskas and Jerami Grant. The 76ers ended the quarter with eight turnovers, which led to 11 Dallas points.

The 76ers were down by as many as 19 points in the second quarter before reeling off 25 of the final 36 first-half points to enter the locker room down just five, 49-44.

Mavericks: Dallas has won six straight and nine of 10 against Philadelphia. . Nowitzki picked up a technical foul from the bench with four minutes left in the first half.

76ers: G Phil Pressey (stomach virus) didn't play. ... In light of the terrorist attacks in France, the 76ers observed a moment of silence prior to the game before playing the French national anthem. In a statement, the 76ers also said there was increased security at the Wells Fargo Center. . Robert Covington (sprained knee) returned to the rotation after playing just 22 minutes all season. Covington did this.

The Mavericks conclude their three-game road trip at Boston on Wednesday night.