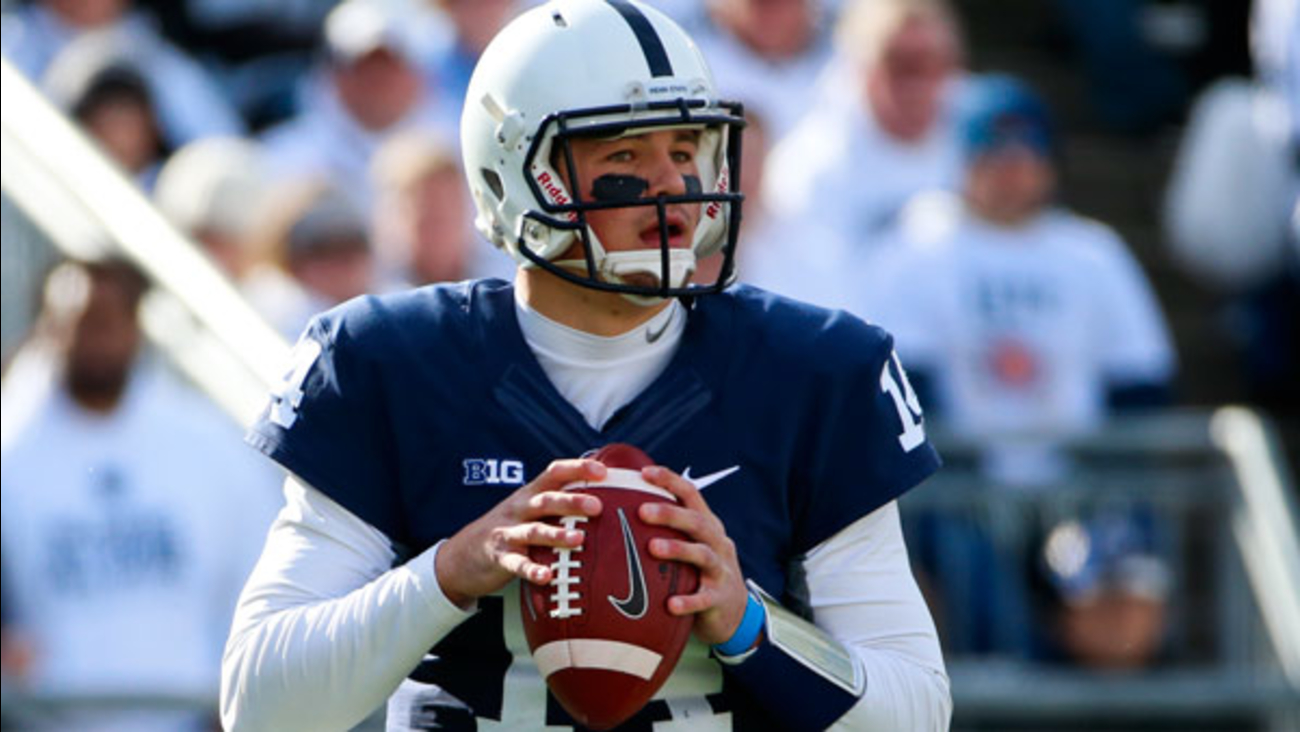 JACKSONVILLE, Fla. -- Penn State quarterback Christian Hackenberg had hoped to go out with a victory.

He certainly didn't expect his college career to end in street clothes.

But Hackenberg spent the second half of his final game with the Nittany Lions on the sideline because of a sprained throwing shoulder. He declared for the NFL draft after a 24-17 loss to Georgia in the TaxSlayer Bowl on Saturday.

"It's been an awesome ride, tough way to end it today," Hackenberg said. "It means the world to me. My family and I talked about it and we felt this was the best decision for me. I felt my role here and my job here has been accomplished."

Standout defensive tackle Austin Johnson also announced after the game that he's turning pro. Johnson, a junior who started every game each of the last two seasons, graduated last month with a degree in journalism.

Like Johnson, most outsiders expected Hackenberg to leave early.

Hackenberg left the bowl game in the second quarter after linebacker Roquan Smith landed on him. Hackenberg stayed in and threw four more passes, but grabbed his shoulder between plays. He headed to the locker room for tests and returned for the second half without a uniform.

He said he wanted to play, but team officials told him no.

"He just fell on it funny," coach James Franklin said. "He was able to go. He actually made some plays there. He was going to try to finish that drive. Once he went inside, the trainers, doctors, didn't feel like he was going to be able to go well enough to continue playing. He wouldn't have the strength in that arm."

"It's in that joint," he said. "Once it gets inflamed, you're going to lose strength and power."

Hackenberg was "disappointed I wasn't able to finish the game." He said he made his decision to turn pro before the team left State College for Jacksonville.

Hackenberg, a junior, is the school's career leader in yards passing (8,457) and touchdowns (48) as well as completions, attempts and total offense. He completed eight of 14 passes for 139 yards against Georgia.

"Things are in good hands moving forward, and I'm proud about that," Hackenberg said. "I did get emotional about it, had a little breakdown in the locker room, but all is good. We're moving forward."

After a slow start, McSorley found a rhythm, throwing a 17-yard touchdown pass to Geno Lewis on the first play of the fourth quarter and then a 20-yard strike to DaeSean Hamilton with 6:14 to play.

"When you first come in, you kind of sort of have to get your feet wet a little bit," said Penn State's Chris Godwin, who caught six passes for 133 yards and became the third receiver in school history to top the 1,000-yard mark. "After the first couple throws that were completed, I think you saw a little bit of a confidence boost for him. ... I think that was really big."

Hamilton's leaping grab between two defenders made it close, a welcome change given many of the games on New Year's Eve and New Year's Day.

The Bulldogs (10-3) responded with a 50-yard drive that could have sealed the victory, but they failed to convert a fourth-and-2 play at the 23. Georgia interim coach Bryan McClendon decided to go for it because kicker Marshall Morgan injured an ankle on a kickoff and backup Collin Barber missed a 48-yarder in the third quarter.

Penn State took over with 1:52 remaining and no timeouts. McSorley converted two fourth-down plays, but eventually ran out of time. His final pass, a Hail Mary to the end zone, was batted down as time expired.

The Nittany Lions (7-6) lost their fourth in a row to end Franklin's second season.

And now they'll likely turn to McSorley to replace Hackenberg.