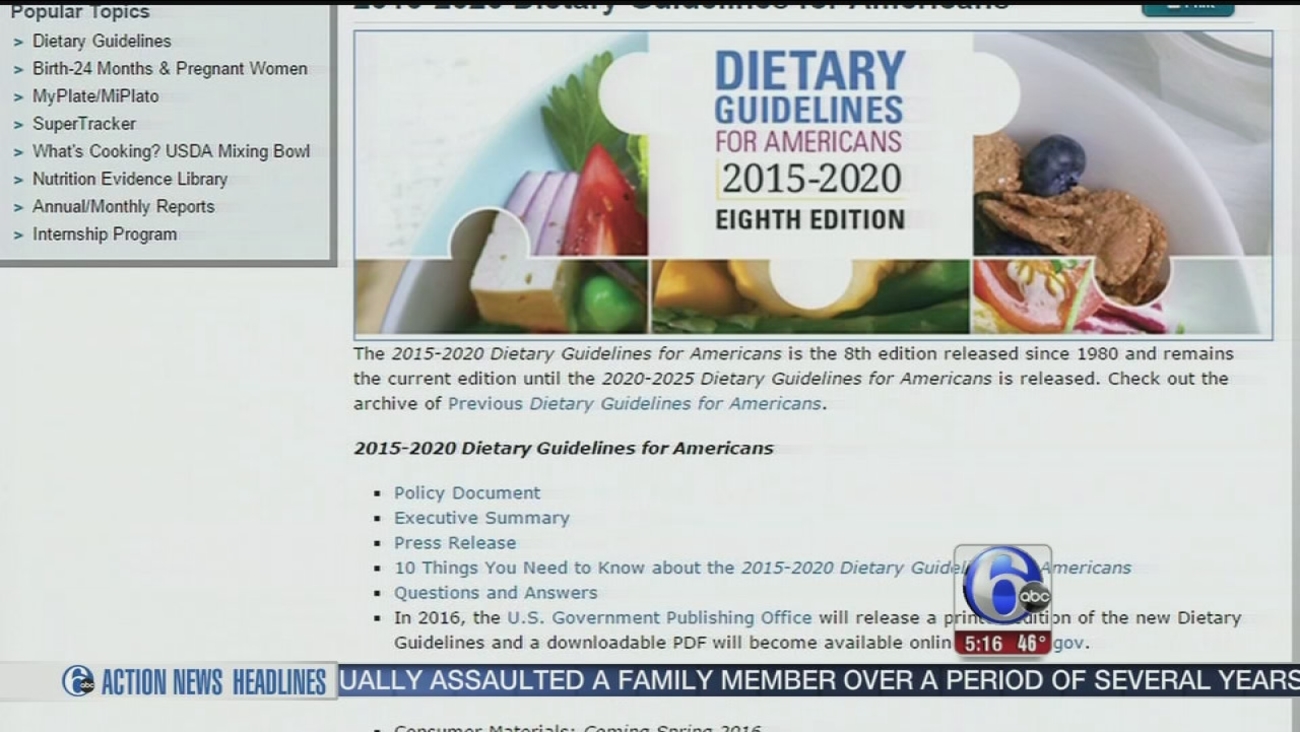 The government has released some new rules of the road on healthy eating. (WPVI)

PHILADELPHIA (WPVI) -- There are some new rules of the road on healthy eating.

The latest government diet guidelines are out, and they are getting a mixed reception from some medical experts.

While some recommendations were expected, at least one part is drawing fire.

The guidelines, which are updated every five years, are aimed at helping Americans eat healthier, both directly and indirectly, and prevent health problems like heart disease, cancer and diabetes.

So what's in and what's out with the government's new dietary guidelines?

Many recommendations aren't new, but some are, such as the one on added sugar.

It is high on the hit list, especially from drinks such as soda.

Americans should aim for about 200 calories from added sugar per day or less - no more than 10 percent of your daily calories.

An average 12-ounce can of soda has about 9 teaspoons.

As for what's in - the report calls for more colorful vegetables and fruits, lean protein, whole grains and low-fat dairy.

And there's no longer a limit on foods high in cholesterol such as eggs.

But this isn't a green light to chow down on butter and bacon.

Many foods with high cholesterol also have lots of saturated fat which can increase your blood cholesterol.

As for sodium, it should be kept under 2,300 milligrams per day.

This isn't as strict as previous guidelines but likely affects most Americans, since the average person consumes 3,400 per day, mostly from processed foods.

The main controversy is regarding protein sources.

That's toned down from what the expert panel developing the guidelines called for last February.

It called for a more environmentally friendly diet lower in red and processed meats.

And last October, the World Health Organization warned processed meat raises the risk for some cancers.

The new guidelines do say men ages 14 to 70 eat too much protein overall and they should lower their intake.

Of course these guidelines are not one size fits all.

They do include a vegetarian option, and they urge people to find foods within their own cultures which meet the recommendations.

They also have an online tool called 'Choose My Plate,' which allows you to figure out changes you can make to your diet.

Cardiologist Steve Nissen of the Cleveland Clinic feels the cholesterol advice is still too vague, and not firmly based in science.

Others criticize the overall approach of recommending a pattern of eating, instead of giving specific advice.

He has always recommended a varied diet, limiting saturated and trans fat and sodium for the prevention of heart disease.

Regarding meat, he said this can include lean red meat on occasion.

He said these foods have the potential to affect lipids and blood pressure, potentially increasing the risk for heart problems.

So he said, "While lean meats, even red meats, in moderation are fine, processed meats should be avoided."