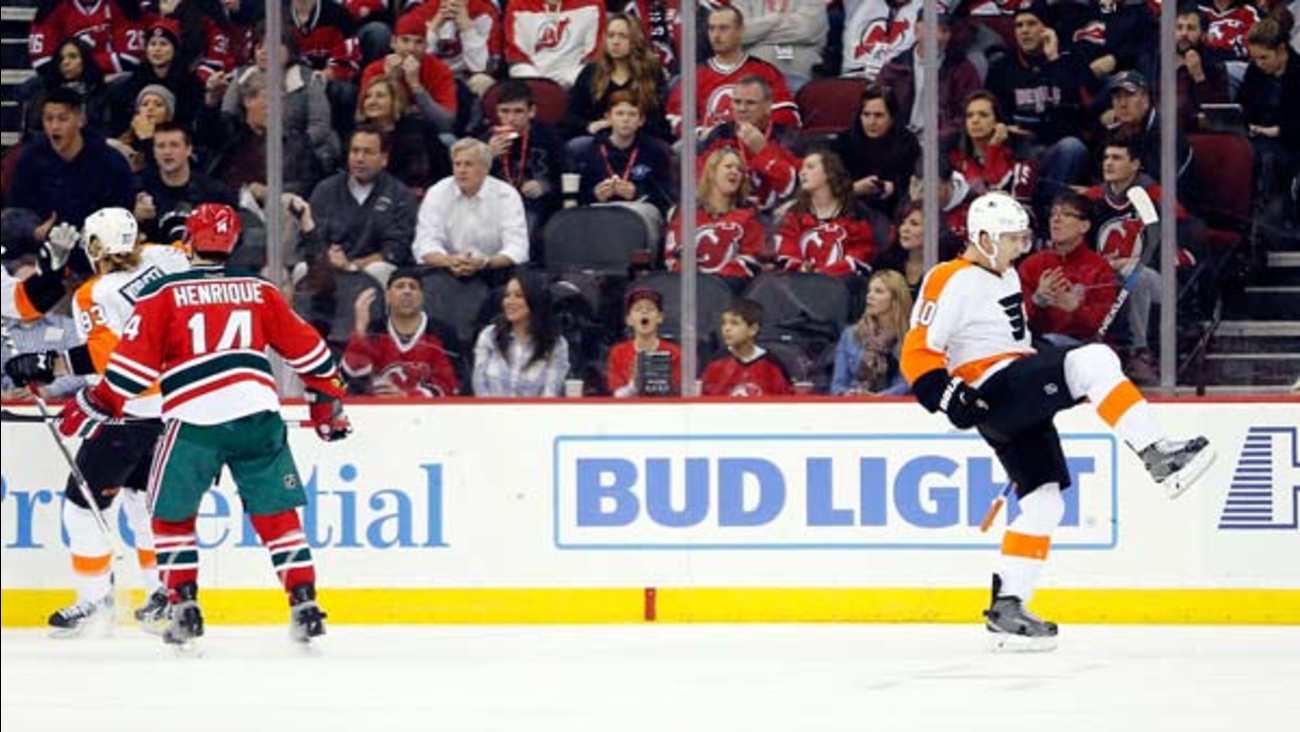 NEWARK, N.J. -- Coming off a bad weekend, the Philadelphia Flyers got back on track with a big game from its special teams and a huge third period against the usually stingy New Jersey Devils.

Wayne Simmonds and Nick Cousins scored 50 seconds apart in a four-goal third period and the Flyers won for only the second time in seven games with a 6-3 victory over New Jersey Tuesday, snapping the Devils' three-game winning streak.

"That was a huge win, especially against New Jersey," said Simmonds, who snapped a 2-all tie. "That's a team directly in front of us that we're chasing. That was a big one for us."

With less than two months left in the season, the Flyers, who lost games to the Devils and Rangers this past weekend, are four points out of a playoff spot and five behind the Devils.

"We obviously still have a lot of hockey to play but it was a bad weekend, not where we wanted it to be," said Schenn, had a goal and two assists. "To get 3 of 4 points against the Devils, we'll definitely take it."

Special teams were the difference. The Flyers killed 6 of 7 power plays and converted on 2 of 4 extra-man chances.

"PK was huge tonight," said Flyers goaltender Michal Neuvirth, who made 21 saves. "It was one of the biggest reasons we won that game. We took too many penalties but the PK stepped up and basically won the game for us."

"We just weren't good enough in any phase of the game for us to be able to win," Devils coach John Hynes said.

Simmonds snapped a 2-all tie at 12:22 of the third period with a power-play goal. Schenn set it up with a cross-ice pass from the left circle that Simmonds redirected into an open net for his 21st goal.

Cousins got his second goal of the season on a scramble in front less than a minute later and Voracek beat Cory Schneider on a 2-on-1 break to push the lead to 5-2.

Palmieri got the Devils within two goals with his 21st of the season, but White scored into an empty net to close out the scoring.

The Devils tied the game 2-all midway through the third period, shortly after Neuvirth made four outstanding saves on New Jersey's seventh power play.

Rookie defenseman Seth Helgeson kept the puck in the zone and Tootoo beat Neuvirth with a shot from the top of the right circle.

Gostisehere's rookie point scoring streak is the longest by a defenseman and it is tied for fifth overall with Nathan MacKinnon of Colorado in 2014. The league record for a rookie at any position is 20 games by Paul Stastny of Colorado in 2007.

The Devils had come into the game with one of the NHL's hottest power plays. They were 12 for 28 over the past 10 games.

In Saturday's 2-1 win over Philadelphia, the Devils got both of their goals with the extra skater.

The Flyers were fortunate to leave the ice after the first period tied 1-all. They spent most of the period on the penalty kill as defenseman Radko Gudas picked up a match penalty for an elbow to the head of Bobby Farnham. They also took three other minors, including an interference call on Nick Schultz that resulted in Stephen Gionta leaving the game with what appeared to be a shoulder injury.

NOTES: Flyers F Jordan Weal is going to be sidelined roughly three weeks with an upper body injury, Flyers general manager Ron Hextall said before the game. ... Two days after beating the Kings 1-0, the Devils' game-winning goal was credited to Joseph Blandisi. Defenseman David Schlemko originally got credit for it. ... Blandisi got an embellishment penalty on a play he was slashed by Flyers defenseman Andrew MacDonald and had to be helped off the ice.