"Mr. Trump just arrived in Chicago and after meeting with law enforcement has determined that for the safety of all the tens of thousands of people that have gathered in and around the arena, tonight's rally will be postponed until another date. Thank you very much for you attendance and please go in peace," a speaker announced at the podium inside the arena.

A spokesperson for the Chicago Police Department tells ABC7 Eyewitness News the department did not talk to the Trump campaign or tell them to cancel the event, and the first police heard was at 6:30 p.m. when they were notified by UIC and the Secret Service the event was canceled.

"Shortly before 6:30 pm, the Chicago Police Department was notified by officials that the Trump campaign had cancelled their scheduled event. We are continuing to work with our partners in the United States Secret Service and the University of Illinois at Chicago Police to protect people's First Amendment rights and ensure everyone is able to disperse the area safely."

In a statement from UIC Police Chief Kevin Booker, he said:

"The University of Illinois at Chicago worked with all appropriate agencies to address the security concerns associated with an event of this nature including the Secret Service, Chicago Police Department and Illinois State Police as well as campaign and protest organizers. The vast majority of attendees at today's events exercised their Constitutional rights of free speech and free assembly peacefully. The abrupt announcement of the cancellation of the event created challenges in managing an orderly exit from the Pavilion, which nonetheless, was accomplished with no injuries or arrests."


As many as 10,000 people had tickets to attend the rally and at least 7,000 were in the Pavilion at the time of the cancellation. The line still stretched several blocks around the building. A crowd of protesters outside the area swelled to at least 1,000 people.

UIC has an especially diverse student body, including many sons and daughters of immigrants. Some questioned Trump's decision to hold the rally there in the first place. The students who came to protest said they were speaking out against Trump's bigotry.

There are questions about control over the ticketing and whether people who disagree with Trump were able to get tickets. There was some speculation that protesters would purchase tickets and not attend in order to make the rally sparsely attended, but it appears they did the opposite.

The outbound Eisenhower Expressway was blocked near the UIC Pavilion briefly with protesters before Chicago police cleared the road.

People were stuck for a time in the UIC parking garage across the street from the Pavilion due to protesters blocking the street outside. Some inside the garage were frightened.

Hundreds of protesters outside the Donald Trump rally at UIC Pavilion.

"The police, they don't seem to be doing anything to get anyone out of here, so everyone in the parking garage started to get weapons out of their car, they're ready to fight," said a caller named Cathy. "We're stuck in the garage. We haven't moved. We haven't been able to leave."

Cars began leaving the garage not too long after that, with police controlling the flow of vehicles.

"I think they have a right to protest, but I think they should do it outside," says Trump supporter James Plocicki. "Let the man speak, because that's what we came here for, to hear him."

"I think it's stupid," said John Quaas. "I don't think they're getting anything done by doing it, honestly. It's just gonna make more animosity and hate among types of fans."

The Pavilion can hold up to 10,000 people and the Trump campaign says that's how many people they expect. Anyone wearing obvious anti-Trump gear or carrying an anti-Trump protest sign were not allowed in.

Many attendees came from Indiana and Wisconsin, making it a day trip to see the candidate they support. They were disappointed it was canceled.

Protests about a Trump rally in Chicago started days ago.

About 180 faculty and staff members signed a letter to the university's chancellor expressing concern. Students at the diverse campus said it is no place for Trump, especially for his platform of hate and intolerance.

UIC officials said they believe the decision is not an endorsement, but in line with a long-standing policy to rent to politicians.

"It was quite disappointing that they couldn't cancel because we feel it's not just offensive to us, the things that he's spreading, but it's also something- we feel unsafe here on campus having someone like that here, and his supporters," says Asa Wahdan, of the UIC Muslim Student Association.

Local Latino groups also were not happy about Trump's visit.

"I do not believe Donald Trump will make it to the White House. I believe that America is a great nation - we all believe in protecting our sovereign nation. The difference between Donald Trump and I is that I don't believe it should be at the cost of destroying families, deporting people. And that's why we're here today," said Julie Contreras, League of United Latin American Citizens.

SECURITY WAS TIGHT AT UIC

Hours before the rally, Chicago police were on horseback and bicycles around the pavilion, as well as police tactical teams.

Chicago police officials said the rally was a Secret Service security operation, with them in a supporting role.

Secret Service opened doors at UIC about 15 minutes early. Rally attendees had their bags searched and were checked for weapons.

With Trump the subject of Secret Service protection, even his supporters are not allowed to bring in signs, posters or banners and full size cameras, GoPros and selfie-sticks are also banned.

But as in other cities where Trump has appeared, there are detractors.

"There's hate in that pavilion," says protester Sophia Sarabia. "We believe with our prayer and our drums, we can overcome this hate with love. God is love."

During the last CNN GOP debate, Trump was grilled about a violent exchange at his North Carolina rally Wednesday, in which a supporter sucker-punched a protester in the face as he was leaving.

"When they see protest and some cases, you know you're mentioning one case which I haven't seen, I heard about it, which I don't like. But when the see what's going on in this country, they have anger that's unbelievable," Trump responded.

The ugly moment has gone viral. Police say the man who threw the elbow, 78-year-old John McGraw, is now charged with assault and battery.

Increasing levels of violence have been witnessed at Donald Trump rallies, a cause for concern at the UIC rally Friday.

The Trump campaign says they "discourage this kind of behavior" and "ensure the safety of any and all attendees," but the attack follows weeks of Trump suggesting to his supporters that they get violent.

"We're not allowed to punch back anymore. I love the old days," Trump lamented at one rally.

"So if you see somebody getting ready to throw a tomato, knock the crap out of them, would you? Seriously," he said at another event.

"I'd like to punch him in the face, I'll tell you," Trump said at a different rally.
Related topics:
politicsdonald trumpprimary electionprotestpoliticscampaignu.s. & worldrally
Copyright © 2021 WPVI-TV. All Rights Reserved.
RELATED 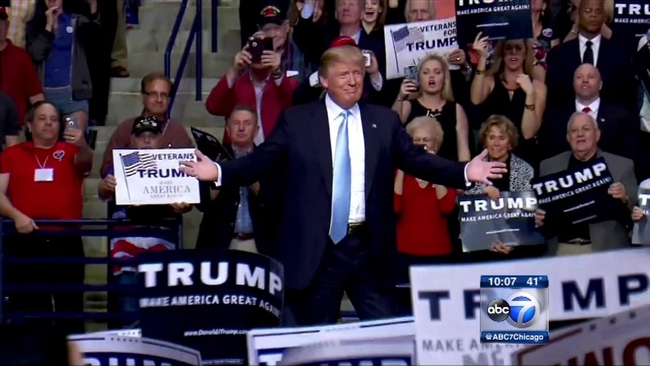