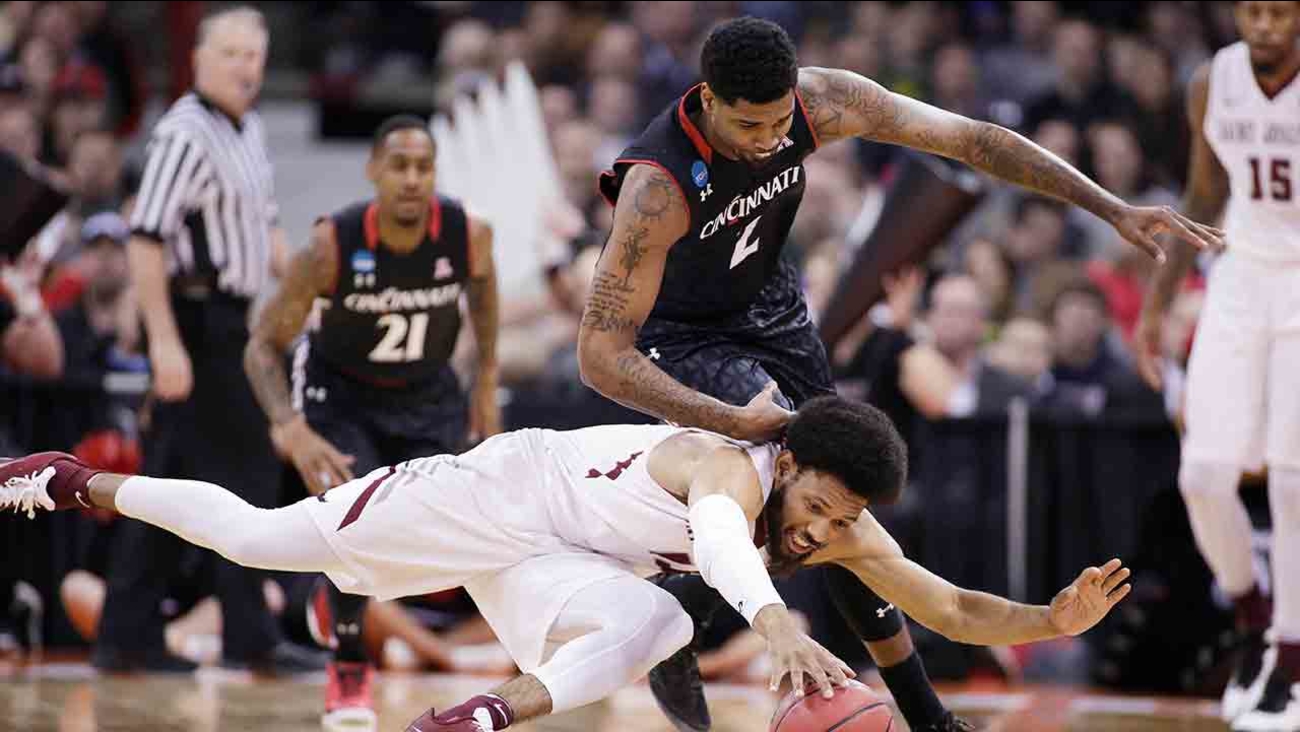 WPVI
SPOKANE, Wash. -- Saint Joseph's coach Phil Martelli will take the victory over Cincinnati. He just wishes it had ended a little differently.

Isaiah Miles sank a 3-pointer with 9 seconds left to lift Saint Joseph's to a 78-76 win over the hard-luck Bearcats Friday night after officials waved off a Cincinnati basket at the buzzer. Octavius Ellis appeared to tie the game with his two-handed dunk as time expired, but officials after a lengthy review determined that the shot came too late.

"In a small way I wish it hadn't ended like that," Martelli said. "I wish it would have ended with Isaiah making the 3 and us getting a stop. From what I could see it was the right call."

Saint Joseph's will play top-seeded Oregon in the second round on Sunday. The Ducks beat Holy Cross 91-52 earlier Friday.

And a happy St. Joseph's Day to all!

The NCAA released a statement after the game saying Ellis' dunk was "disallowed because the ball was on his fingertips when the clock hit 0.0."

A despondent Ellis sat on the stool about 15 feet from the basket for more than 2 minutes after the game ended. He was eventually surrounded by his teammates, put his face in a towel and walked off the court.

"I feel terrible for my team," Cincinnati coach Mick Cronin said. "They played extremely hard and fought back from being down early."

It was the second straight crushing loss for Cincinnati after losing in four overtimes to Connecticut during the American Athletic Conference Tournament.

DeAndre Bembry scored 20 of his 23 points in the first half and Miles finished with 19 to lead eighth-seeded Saint Joseph's (28-7). Jacob Evans scored 26 points to lead ninth-seeded Cincinnati (22-11).

The back-and-forth game was 61-51 Saint Joseph's midway through the second half after a pair of baskets by Aaron Brown.

Cincinnati fought back and Ellis' basket cut the lead to 66-62 with eight minutes left.

Evans then hit three straight baskets for the Bearcats: a 3-pointer to tie the score at 66-66, another basket to tie it at 68-68 and then a 3-pointer to put Cincinnati ahead 71-68 with five minutes left.

Back came the Hawks. Consecutive baskets by Bembry and Miles and a 3-pointer by Brown put Saint Joseph's up 75-71 with 2:33 left but a minute later, a 3 from Farad Cobb trimmed the lead to a single point.

Ellis blocked Brown's shot and Evans picked up the ball and scored on a dunk to put the Bearcats ahead 76-75 with 15 seconds left, setting the stage for the dramatic 3 from Miles.

#Villanova steamrolls. #Temple loses at the buzzer in OT. #StJoes escape OT by a fraction of a second. Welcome to March.

And the Hawks escape at the buzzer as the dunk from @GoBearcatsMBB does NOT count! @SJUHawks_MBB on to the next round #Hawks