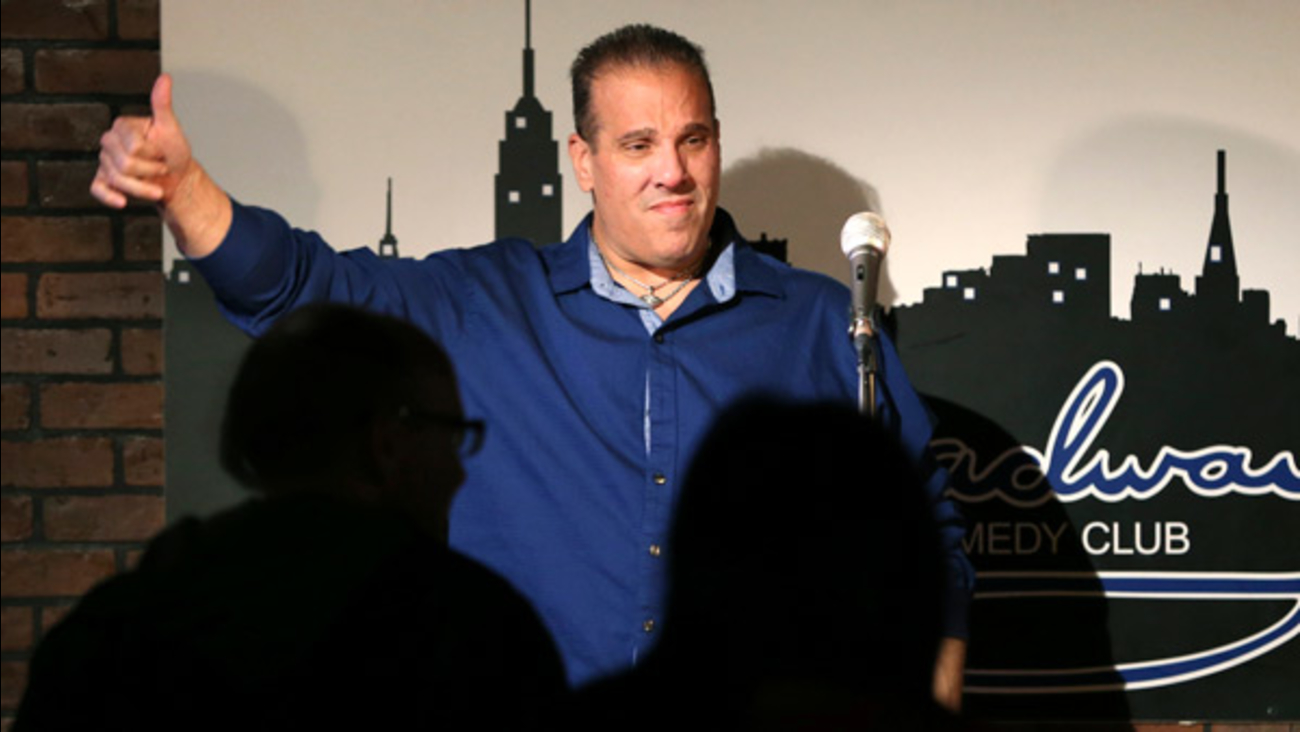 In this March 20, 2016 photo, actor-comedian Carlo Goias, of Toms River, N.J., gives a thumbs-up to an audience at the Broadway Comedy Club in New York. (AP Photo/Mel Evans)

NEW BRUNSWICK, N.J. -- An actor who played a bit part in an independent gangster film is facing 10 years in state prison because he used a prop pellet gun without a state gun permit.

Carlo Goias, whose stage name is Carlo Bellario, was charged under New Jersey's strict gun law. It requires permits for firearms, including the airsoft gun Goias used while filming a car chase scene.

Goias rejected a plea deal offer Tuesday that could have sent him to jail for less than a year. He faces up to a decade behind bars because of prior felony convictions that prosecutors say include theft and burglary.

"I was shooting a movie - I wasn't committing a crime intentionally," Goias recently told The Associated Press. "Robert De Niro doesn't ask Marty Scorsese if he has gun permits. We're actors. That's for the production company to worry about."

Some state lawmakers say the case highlights the need for New Jersey to change its gun laws.

The permit law recently led to the arrest of a Pennsylvania corrections officer who lacked a New Jersey permit for a gun that was legal in his home state. The charges were later dropped.

Airsoft guns fire nonlethal plastic pellets. Nearly half of the states and many cities regulate the weapons to some degree, according to the San Francisco-based Law Center to Prevent Gun Violence.

New Jersey defines all non-powder guns as firearms, which require a permit to carry them. State lawmakers are pushing legislation that would give prosecutor's more discretion in filing charges under the statute.

Goias, who lives in Toms River, New Jersey, said he only acts part time to get more exposure for his day job as a standup comedian. The Internet Movie Database credits him with a few roles, including the part of "beach man" in the 2013 movie "Bikini Girls vs. The Surf Wolf."

When he was arrested, Goias was playing the body guard of a drug dealer in the unfinished film "Vendetta Games." The plot involves undercover agents who infiltrate a Columbian drug operation. IMDb lists the movie's budget as $50,000.

The car chase scene was shot in a residential neighborhood, prompting several neighbors to call 911.

"I pretended to shoot out the window; they were going to dub in the sound later," Goias said. "We get back, and within a couple of minutes we're surrounded by cop cars."

Goias said he spent four days in jail as friends and family raised $10,000 for bail. An online fundraising site, with the title "RAW DEAL FOR CARLO," has raised nearly half of its $15,000 goal. Goias also recently held a fundraiser at comedy club in Manhattan.

Andre Joseph, the film's director, writer and star, declined to comment, citing the advice of his attorney. James O'Neill, a spokesman for the Middlesex County Prosecutor's Office, also declined to comment because the case is still pending.

Jef Henninger, Goias's defense attorney, said his client is innocent based on his intent, which was to act in a movie, not commit a crime.

"Our fight is really with New Jersey's gun law and the fact that we have person after person getting arrested and worrying about going to prison," Henninger said. "There has to be a safety valve that prosecutors have, so these cases can be quickly dealt with."