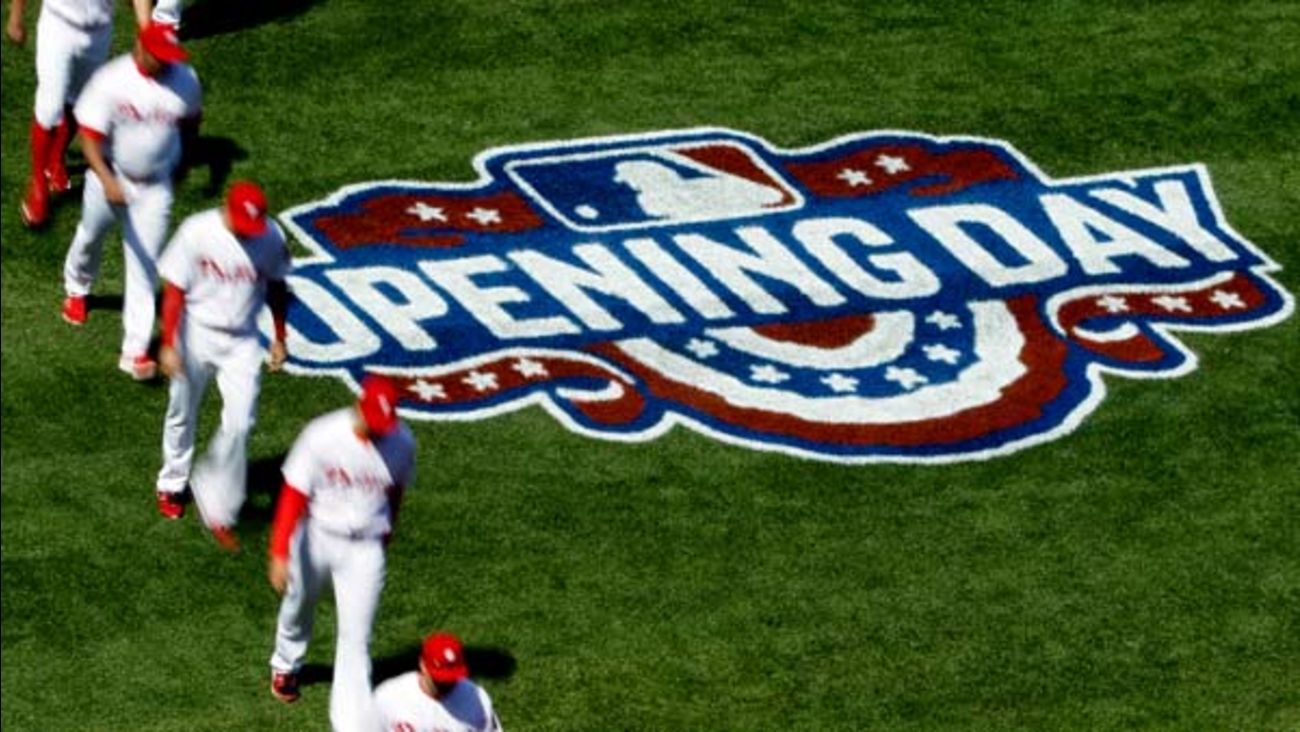 Philadelphia Phillies walk to the dugout ahead of their home opening day baseball game against the San Diego Padres, Monday, April 11, 2016, in Philadelphia. (AP Photo/Matt Rourke)

Wil Myers hit a solo homer for the Padres, who benefited from a strange double play and two video reviews going their way.

Kevin Quackenbush (1-0) struck out the only batter he faced to earn the win after starter Andrew Cashner allowed three runs in five-plus innings. Fernando Rodney tossed the ninth for his first save for the Padres. 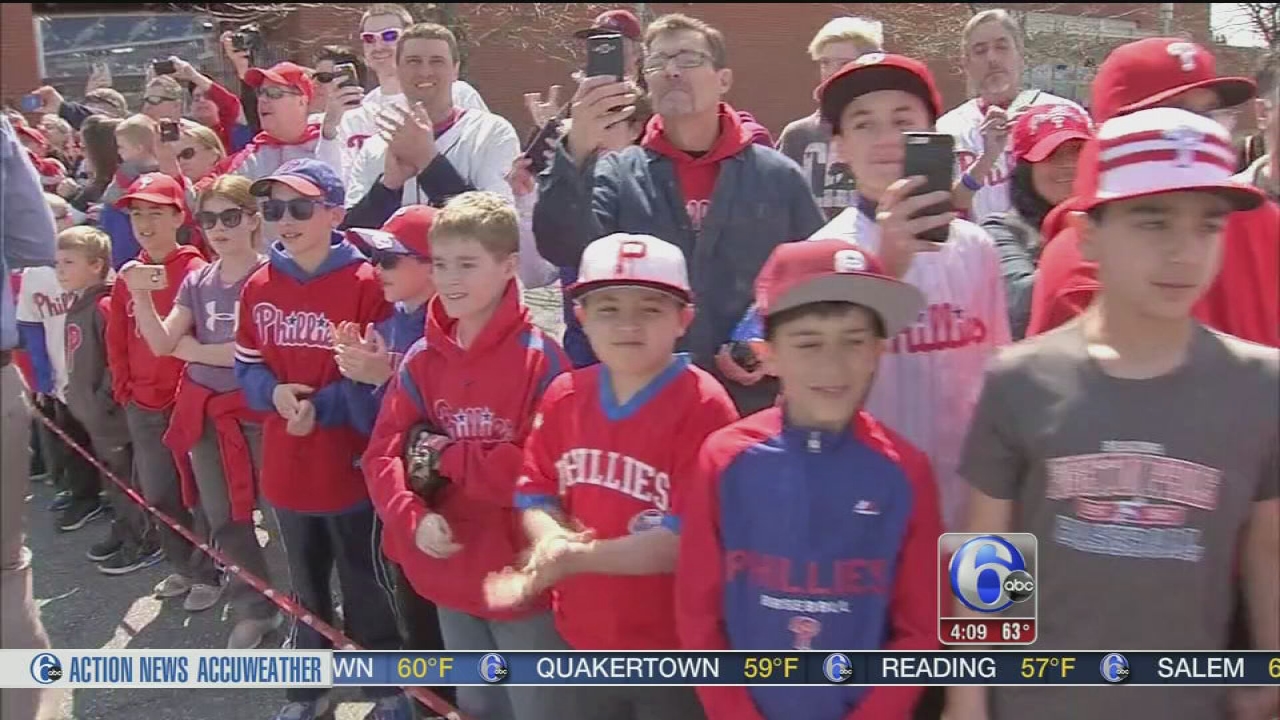 Derek Norris hit a one-out double off Nola in the seventh and advanced on Alexei Ramirez's infield single. Third baseman Maikel Franco made an outstanding diving grab but his throw pulled first baseman Darin Ruf off the bag. The play was initially ruled an out, but the Padres challenged and won. Amarista then executed a perfect sacrifice to score Norris, who broke for home after the ball was bunted toward Nola.

The Phillies overcame a 3-0 deficit to tie it on a weird sacrifice fly in the sixth. They chased Cashner with three straight singles by Cesar Hernandez, Odubel Herrera and Franco. Left-hander Brad Hand entered and Ruf pinch-hit for former NL MVP Ryan Howard.

Ruf lofted a shallow fly that was immediately ruled an infield fly. The ball drifted over shortstop Ramirez's head and landed untouched in left field. Ramirez picked it up and threw to third base for a force out with Hernandez scoring the tying run.

The Phillies challenged the out at third, but it was confirmed on replay. Ruf was out once third-base umpire Will Little signaled for the infield fly.

Nola retired the first six batters on just 16 pitches before Ramirez led off the third inning with a single. Jon Jay's two-run double gave the Padres a 2-0 lead.

Myers connected to left leading off the fourth for a 3-0 lead.

Hernandez hit a triple and scored on Herrera's single for Philadelphia's first run. Peter Bourjos followed Cameron Rupp's double with a one-out RBI double to cut it to 3-2 in the fifth.

Padres: Improved to 3-4 with their third win in four games after opening the season with three straight shutout losses against the Dodgers.

Phillies: After winning two in a row against the defending NL champion Mets, Philadelphia fell to 2-5.

The Phillies held a moment of silence before the game for Philadelphia Flyers founder Ed Snider, who died Monday after a two-year battle with bladder cancer. He was 83.


THE CHAMPS WERE HERE

Members of the national champion Villanova Wildcats were at the game, including coach Jay Wright. Ryan Arcidiacono and Daniel Ochefu threw out the first pitch and some of their teammates joined the Phillie Phanatic atop the Phillies dugout after the seventh inning. 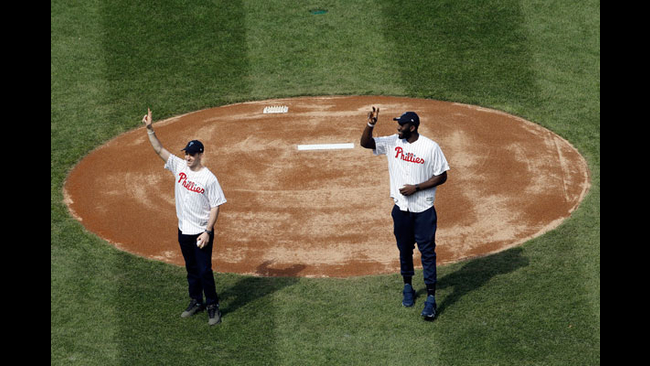 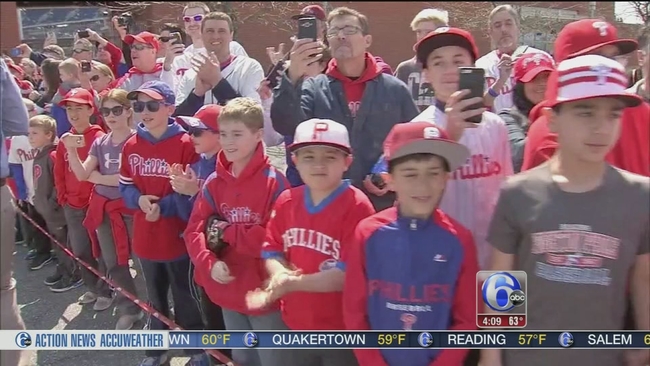