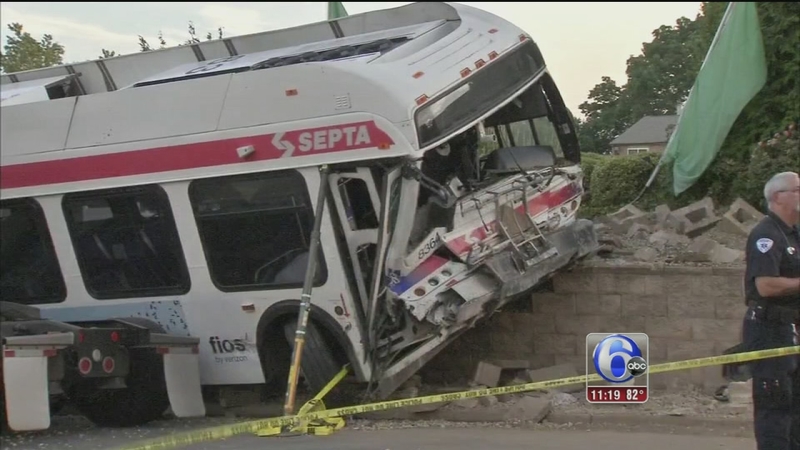 28 people to hospitals after traffic mishap forces Septa bus off road in Yeadon. Issue now how to untangle bus. pic.twitter.com/V1vJ8ykcNE

It happened around 6:30 p.m. Sunday at Lansdowne Avenue and Providence Road in Yeadon.

Witnesses say they heard a loud boom, and by the time they got to the bus, some dazed passengers had been helped out of the bus by the driver and neighbors.

The bus apparently had narrowly miss hitting a large truck head-on. Instead, steering to the left, jumping the curb and coming to rest on a retaining wall.

"He swerves to avoid the tractor trailer, therefore he hit the embankment over here, and they got people out really quick," said Tony Carter, witness. "The bus driver was quick to get the people out. It was a little kid, it was mostly adults."

SEPTA officials say 26 passengers aboard a Route 113 bus were hurt in the collision.

Medical personnel set up a triage process and sent more than two dozen people to hospitals.

"We treated a total of 28 patients that were transported to various hospitals throughout the Delaware cCunty," said Yeadon Fire Company Chief Craig Jeffries. "Most of the injuries were bumps, bruises, neck pains, things of that nature."

Two people, believed to be pedestrians on the sidewalk, were seriously injured and taken to Penn Presbyterian Medical Center.

Authorities are investigating the cause of the accident.