WPVI
1 / 10
Miami Marlins' Jose Fernandez looks out from the dugout during the ninth inning of a baseball game against the San Francisco Giants, Tuesday, Aug. 9, 2016, in Miami.
AP Photo/Wilfredo Lee
MIAMI (WPVI) -- Jose Fernandez, the ace right-hander for the Miami Marlins who escaped Cuba to become one of baseball's brightest stars, was killed in a boating accident early Sunday morning. Fernandez was 24.

Authorities said Fernandez was one of three people killed in a crash off Miami Beach.

Chief Petty Officer Nyxolyno Cangemi told The Associated Press that a Coast Guard patrol boat spotted an overturned boat at 3:30 a.m. on a jetty near Government Cut. The bodies were discovered a short time later, and officials said speed played a factor.

"We are devastated by the tragic loss of José Fernández," the Marlins said in a statement.

Reaction quickly poured in from around the game. Major League Baseball released a statement saying it was "stunned and devastated."

"He was one of our game's great young stars who made a dramatic impact on and off the field since his debut in 2013," MLB Commissioner Rob Manfred said. "Our thoughts and prayers are with his family, the Miami Marlins organization and all of the people he touched in his life."

The Marlins' game Sunday at home against the Atlanta Braves has been canceled. The Braves, along with several other teams, quickly shared their condolences with the Marlins.

"Hands down one of my favorite guys to watch pitch! He brought nothing but intensity and passion," Boston Red Sox pitcher David Price said on Twitter early Sunday.

Because the boat was on a jetty, the Coast Guard notified Miami-Dade police, which turned the investigation over to the Florida Fish and Wildlife Conservation Commission.

Fernandez was on a 32-foot vessel that had a "severe impact" with a jetty, said FWC's Lorenzo Veloz. The overturned boat remained in the water Sunday morning, its engine partially submerged as its nose pointed skyward, as debris from the crash was scattered over some of the large jagged rocks. 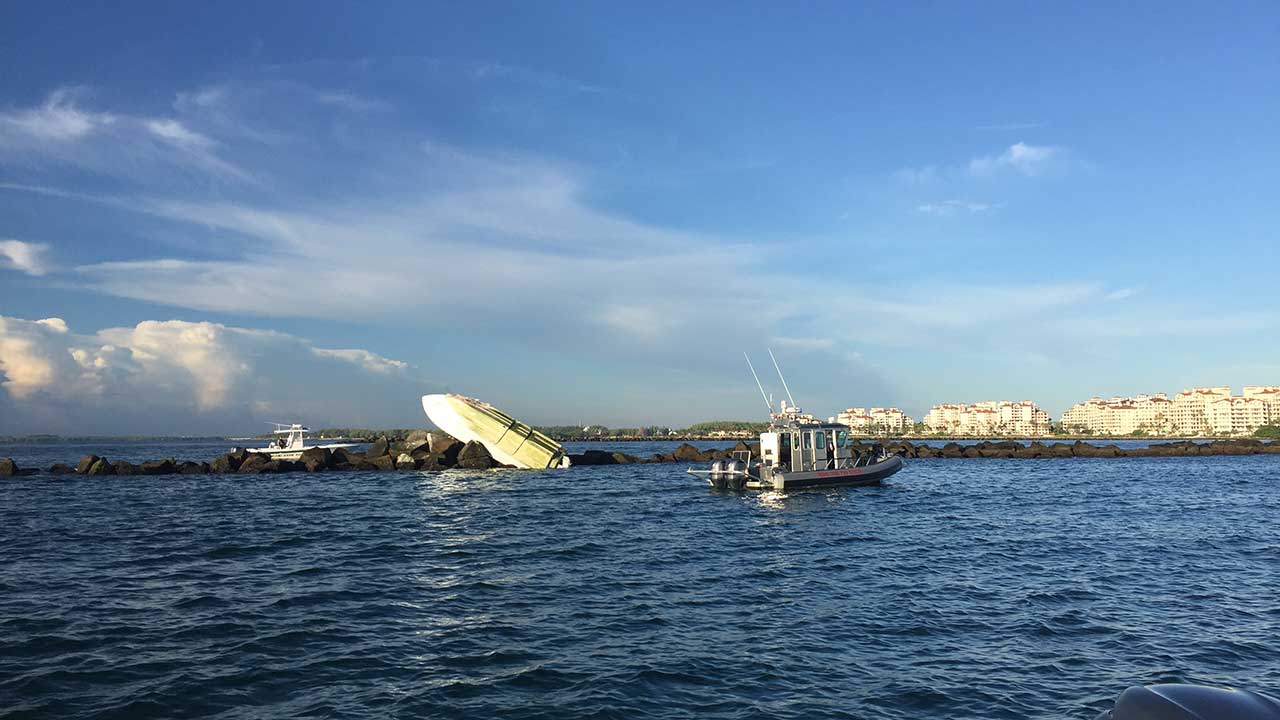 Fernandez's death immediately brought memories of past baseball tragedies, such as the deaths of Thurman Munson and Roberto Clemente - stars who died in plane crashes in the 1970s.

Cleveland teammates Steve Olin and Tim Crews were killed in a boating accident in Florida in 1993, and the game also reeled from the sudden deaths of major leaguers Darryl Kile, Lyman Bostock and Cory Lidle in recent years.

"Jose was a remarkable young man and a tremendously gifted athlete, who, at just 24, established himself as one of the game's biggest and brightest stars," said Tony Clark, the executive director of the Major League Baseball Players Association. "Our thoughts and prayers go out to Jose's family, friends, teammates, Miami Marlins organization and legions of fans in the United States and Latin America."

The Miami Dolphins said they would have a moment of silence before their game in nearby Miami Gardens on Sunday afternoon to remember Fernandez.

City of Miami Fire-Rescue workers were seen carrying bodies, draped and on stretchers, at the Coast Guard station after sunrise Sunday. Officials later said they were taken to the medical examiner's office. Two bodies were found under the vessel and a third was found on the jetty, said Capt. Leonel Reyes of Miami-Dade Fire Rescue's Marine Services Bureau.

The names of the other two individuals are being withheld pending notification of relatives, the Coast Guard said.

"It does appear that speed was involved due to the impact and the severity of it," said Veloz, the FWC spokesman. "It does appear to be that they were coming at full speed when they encountered the jetty, and the accident happened."

Veloz said there was no immediate indication that alcohol or drugs were a cause in the crash. He also said none of the three victims wore a life jacket, and that the boat was owned by a friend of Fernandez's.

"It does pertain to a friend of Jose who is very well connected with several Marlins players and I have stopped that boat before for safety inspections with other Marlins players on board," Veloz said. "We know that this boat knows the area. We just can't answer why this happened."

Fernandez was a two-time All-Star who went 38-17 in his four seasons with the Marlins, winning the NL's Rookie of the Year award in 2013. The native of Santa Clara, Cuba became a U.S. citizen last year and was enormously popular in Miami.

He tried to defect from Cuba at least three times - landing in jail after one of those unsuccessful tries - before eventually getting to the U.S. and going to high school in Tampa, Florida. The Marlins drafted him in 2011 and Fernandez was in the majors two years later.

"I'm still in shock," former Marlins player Gaby Sanchez said on Twitter. "The world has lost a remarkable person. You will be missed and my heart goes out to the Fernandez family."

Video boards at Marlins Park on Sunday morning showed a large "16" - Fernandez's jersey number - over his name. A few fans milled about, even though the game was canceled.

Fernandez posted a photo of his girlfriend sporting a "baby bump" on his Instagram page last week, announcing that the couple were expecting their first child.

"I'm so glad you came into my life," Fernandez wrote in that post. "I'm ready for where this journey is gonna take us together." 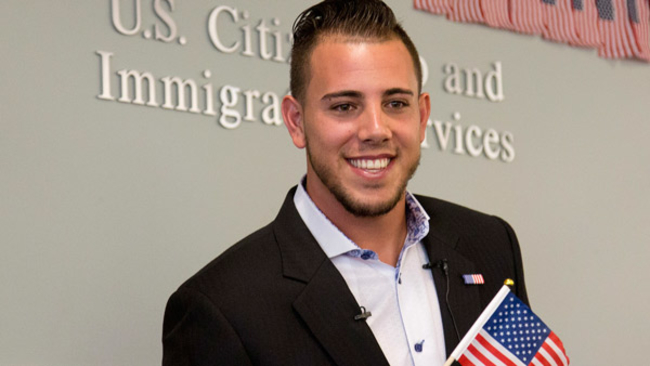