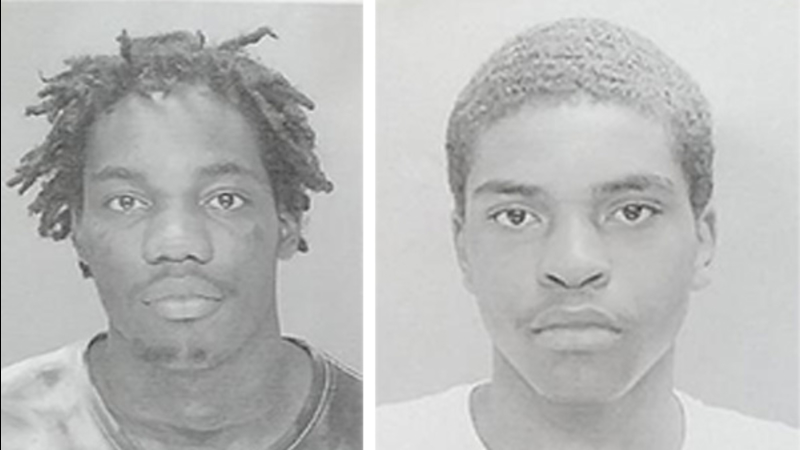 WEST PHILADELPHIA (WPVI) -- Police have identified the two suspects wanted in a shooting at a West Philadelphia block party that injured 11 people, including children.

The shooting happened shortly before 10:00 p.m. Saturday, June 20th in the 4100 block of Ogden Street where a group of people were gathered for a block party.

Neighbors were cleaning up when police say the two men opened fired from down the block.

Detectives believe the shooting stemmed from a fight a week ago and that the shooter and an accomplice waited until it was dark to retaliate.

"They arrived at the corner of 41st and Ogden, they fired the first shot from intersection they then come about 10 yards east and fired a second shot," said Lt. Johnnie Walker, Philadelphia Police.

Pellets sprayed the crowd of about 50 people, injuring 11 of them.

Both suspects fled on foot.

All of the injured were taken to local hospitals.

By Sunday, eight of the victims, including the three children, were released from the hospital.

The shotgun pellets used in the shooting are meant to be used by hunters.

"The bird shot has 9 to 11 pellets inside the cartridge. The dangerous thing with that is that it spreads and that's why we had so many victims here," said Lt. Walker.

On Sunday afternoon, many of the victims returned to the neighborhood where marked patrol cars were spotted in the area of the shooting.

Police are urging witnesses to call them with information, reminding people how close of a call this was for the youngest victim.

"Thank God it hits her in the neck and takes a graze off her neck - that pellet as small as it was could have killed that child because of a fight," said Lt. Walker.

Neighbors say there have been multiple shootings in the area recently. Police do not believe they are related.

Investigators say it's unclear if the intended target was among those hit.

Anyone with information on Lamar or Harvey's whereabouts is urged to contact Philadelphia Police at 215-686-TIPS (8477), text a tip to PPD TIP (7738847) or online at www.phillypolice.com. All tips will be confidential.
Related topics:
west philadelphiacrimephilly newsgun violenceshootingviolencechild shot
Copyright © 2021 WPVI-TV. All Rights Reserved.
More Videos
From CNN Newsource affiliates
TOP STORIES