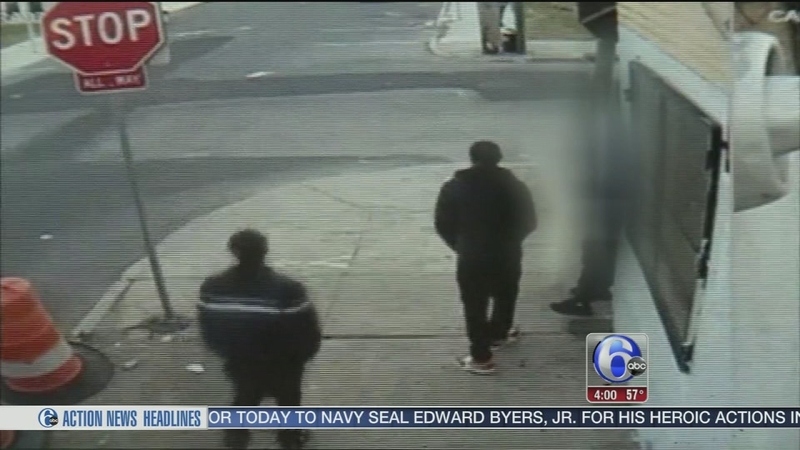 GRAYS FERRY (WPVI) -- Two teenagers were injured in a drive-by shooting in Philadelphia Grays Ferry section, just as leaders prepare to tackle a rash of gun violence in that neighborhood.

The drive by shooting happened Sunday evening at the corner of 31st and Tasker Avenue. Two teens were shot - one is in critical condition, the other is critical but stable.

Surveillance video from 5:45 p.m. shows the victims standing outside a Chinese restaurant on the corner, likely waiting for their food. A white or silver car approaches, and someone inside the vehicle opens fire. A 15-year-old was hit in the abdomen and foot, a 17-year-old in the arm and leg.

Grays Ferry resident Kenny Sorell tells us, "I see the guys come out the Chinese restaurant and they was standing on corner just talking. Then next thing you know, a white car shot by and I heard gunshots."

Right after the teens were hit one ducked into the restaurant, the other took off down the street. In the video you can see other kids running for safety.

This shooting happened on the eve of a meeting set to take place in Grays Ferry at the Vare recreation center, expected to be attended by the mayor. The topic will be reducing gun violence.

Darrien Seymour plans to be at the meeting and says a big part of the problem is a lack of activities for young people.

Seymour tells us, "There's nothing for them to do, so they're stuck with the violence."

It's been a violent year so far in Grays Ferry. In January a man was critically injured after being found shot on the 1200 block of South Ringgold. Earlier this month two shooting victims were being transported when a police vehicle crashed. A few days later a cab driver was shot.

The community has held meetings like the one scheduled for Monday before. The goal is to come up with sustainable solutions.

Seymour says, "In the summertime they will be on this corner all day long because there's nothing for them to do. If there's programs for them, it will decrease the violence."