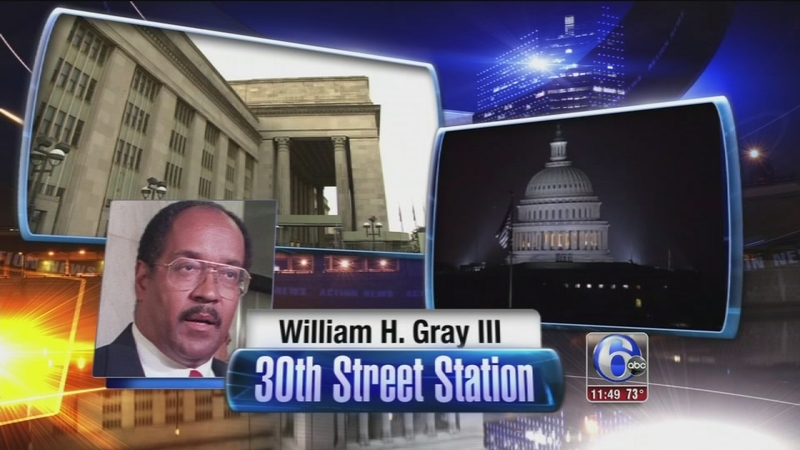 CENTER CITY (WPVI) -- With the stroke of a pen, 30th Street Station has been renamed to honor a giant in Philadelphia politics.

The late William H. Gray III, a Baptist Minister and congressman, broke barriers in city streets and in the legislative branch of government.

Under the new law, the station will be renamed, the "William H. Gray III 30th Street Station."

It was the late Congressman who had secured millions of dollars in the 1980s and 1990s to renovate the station which, at the time, was old and decrepit and falling in disrepair.

It was Congressman Chaka Fattah who came up with the idea to sponsor the bill to change the name.

He praised the late Congressman Gray, not just as a great proponent of Amtrak, but as a trailblazer.

Congressman Gray was the first African-American to chair the House Budget Committee and the first to serve as majority whip - the third ranking position in the House.

Even so, the idea is getting mixed reviews from the public.

"I love 30th Street Station and I would prefer it stay as 30th Street. I didn't know the congressman," said Shailla Bari.

"I remember Bill Gray, he did a lot for the city so its' kind of a good thing to do," said Bill Jenkins.

For some the new name is a mouthful and they would prefer the name stay as it is.

"Been 30th Street Station for all these years, I think it should stay 30th Street," said Robert Goldfarb.

"Because Philadelphia is so historic, we should keep it the way it is. I like the fact that our city has so many old historic monuments and I just think some things we should just keep the same," said Kia Hook.

"They should not do it. If it's not broken, don't fix it," said Marsha Corelien.

While some are against the name change, Congressman Fattah says markers will be placed inside to recognize Gray and his legacy.