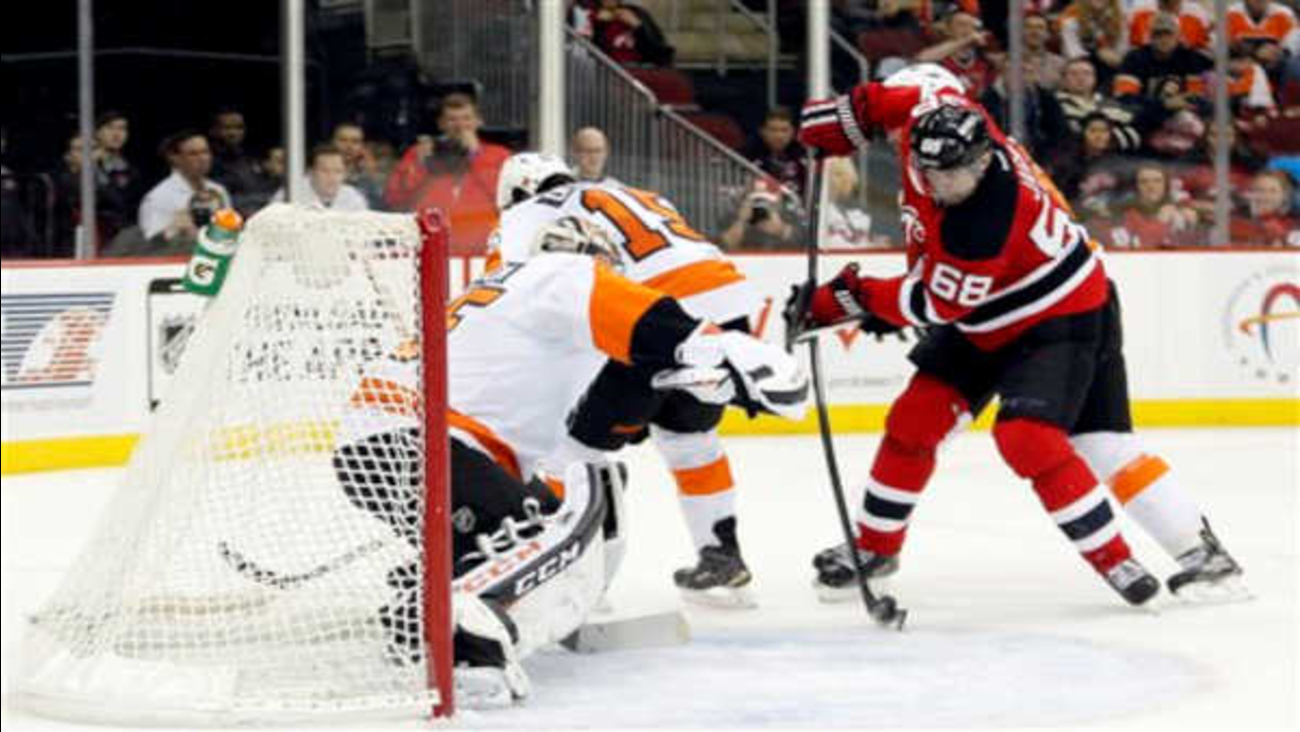 The line of Jagr, Adam Henrique and Scott Gomez combined for four goals and eight points, helping the Devils end a two-game skid with their third victory in 13 games (3-7-3).

The Devils had not scored more than three in a game since a 5-3 victory over the Maple Leafs on Dec. 4, a span of 14 games.

It was Jagr's night to shine, though, He notched his 15th career hat trick, first since March 26, 2006, against the Flyers while a member of the New York Rangers.

Jagr, who turns 43 next month, has 714 goals and is only three behind Phil Esposito in fifth place all-time.

Andrew MacDonald and Vincent Lecavalier scored for Flyers, who dropped their fifth straight.

It was the third meeting between the Metropolitan division rivals. They split the first two games in Philadelphia.

The Flyers scratched captain Claude Giroux, who was cut by a skate in Friday night's loss in Carolina. That ended his streak of consecutive games played at 168.

Jagr scored twice in the first period as the Devils jumped out to a 3-0 lead.

On Jagr's first tally, Flyers goalie Ray Emery misplayed the puck behind his net. Adam Henrique grabbed it for the feed to Jagr who flipped in a backhander at 13:20.

Elias added a power-play score at 15:42 on a drive from the lower right circle.

Jagr struck again, with 3.8 seconds remaining as he converted a turnover by Flyers defenseman Mark Streit.

Steve Mason replaced Emery to start the second. The move didn't help the Flyers as the Devils got two more goals and led 5-1 at the end of the period.

Gomez put the Devils up 4-0 with a slapper from the left circle at 9:35. Jagr then completed the hat trick, poking in the puck from the slot at 12:32.

MacDonald finally broke through for the Flyers at 16:38, beating Schneider from the left circle to cut the Devils lead to 5-1.

Lecavalier got a power-play goal at 5:59 of the third.

NOTES: The Devils recalled Mark Fraser from Albany (AHL). He last appeared in an NHL game on April 12, 2014, with the Edmonton Oilers. ... The game concluded a season-long eight game road trip for the Flyers. ... The teams wasted little time dropping the gloves in the first period. The Flyers' Zac Rinaldo and Jordin Tootoo squared off at 2:36. Philadelphia's Michael Raffi and Tim Sistito battled 22 seconds later. The third bout came late in the second period as New Jersey's Mark Fraser and Wayne Simmonds duked it out. Round four came in the third as Sistito fought Brayden Schenn. Everyone involved received a five-minute fighting major.