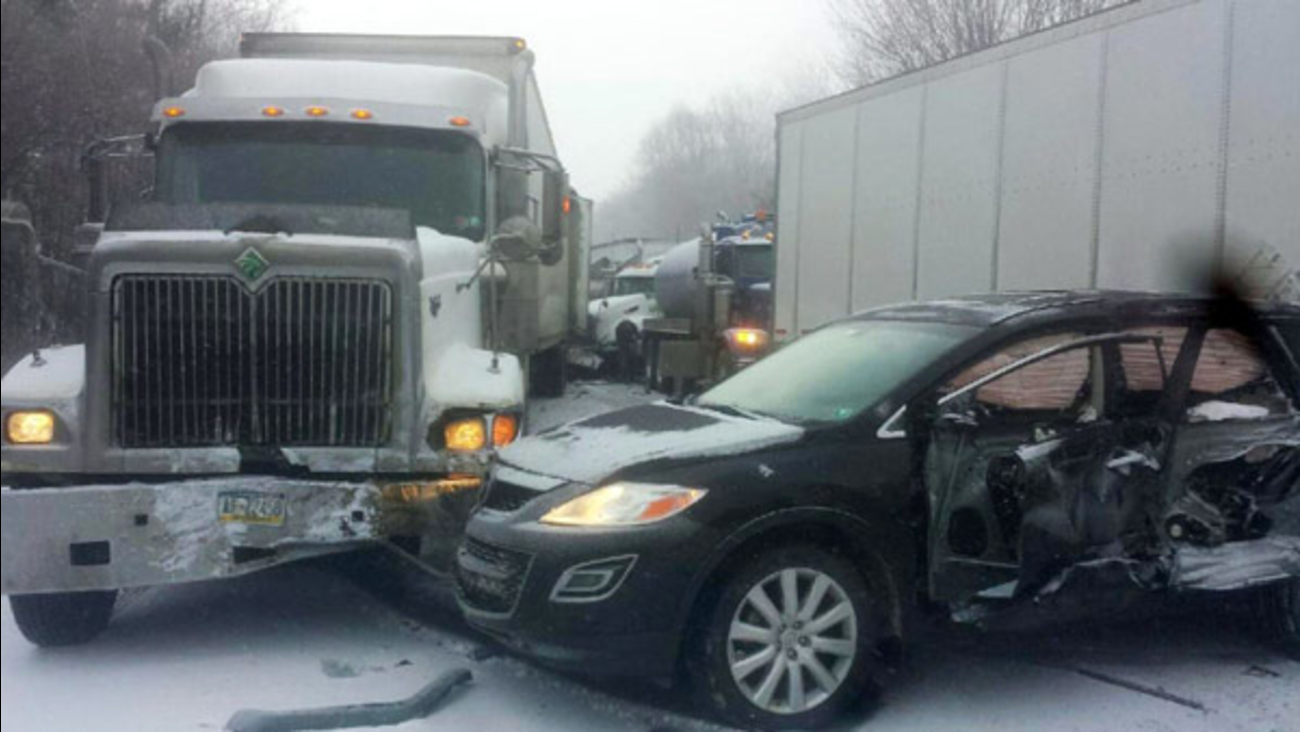 CLARION, Pa. -- A western Pennsylvania motorist and a Kentucky trucker were identified as those who died in an 18-vehicle crash caused by a snow squall that left drivers with little visibility on Interstate 80, authorities said Thursday.

The chain reaction pileup happened Wednesday afternoon in whiteout conditions in Clarion Township, about 60 miles from the Ohio border.

Timothy Floravit, 35, of Beaver Falls, died of chest and stomach injuries from hitting the steering column of his vehicle, which crashed with his wife and children also inside, Clarion County Coroner Terry Shaffer told The Associated Press on Thursday.

The other man killed was Leonard Mink, 67, of Nancy, Kentucky, who was struck by another vehicle when he got out of his rig to help other motorists. It wasn't immediately clear if Mink's vehicle was among those involved in the crash, or whether he had been able to stop safely before he was killed.

Nine trucks, several of them tractor-trailers, and nine cars were involved in the crash in the highway's westbound lanes, state police said. At least one of the trucks was carrying hazardous material, but no leaks were found, a county official said.

"It was carnage," Shaffer said. "(There was) metal everywhere. There were busted axles, trucks totaled. One tanker trunk didn't have any wheels on it."

State police spokesman Trooper Jamie Levier told the AP the number of those injured and taken to hospital was less than 10, not nearly two dozen as was reported earlier. He said the inflated number may have been caused by other authorities assuming that a bus carrying nearly 20 passengers was headed to a hospital.

"They weren't injured. It was 10 degrees out," and the bus was used to keep them warm until they could find other transportation from the crash, Levier said.

The coroner said Floravit's wife said "they just kept getting hit and banged around." He collapsed and died of internal injuries while looking for his children, who had been ejected, Shaffer said. The children were found unharmed.

None of the injuries were thought to be life-threatening, although three of those taken to Clarion Hospital were sent on to Pittsburgh hospitals with more serious injuries. The others were being treated for everything from bumps to broken bones, hospital spokeswoman Julie Kunselman said.

A third person in Clarion County crashed his car and died at about the same time, but his death was attributed to a heart attack, Shaffer said.