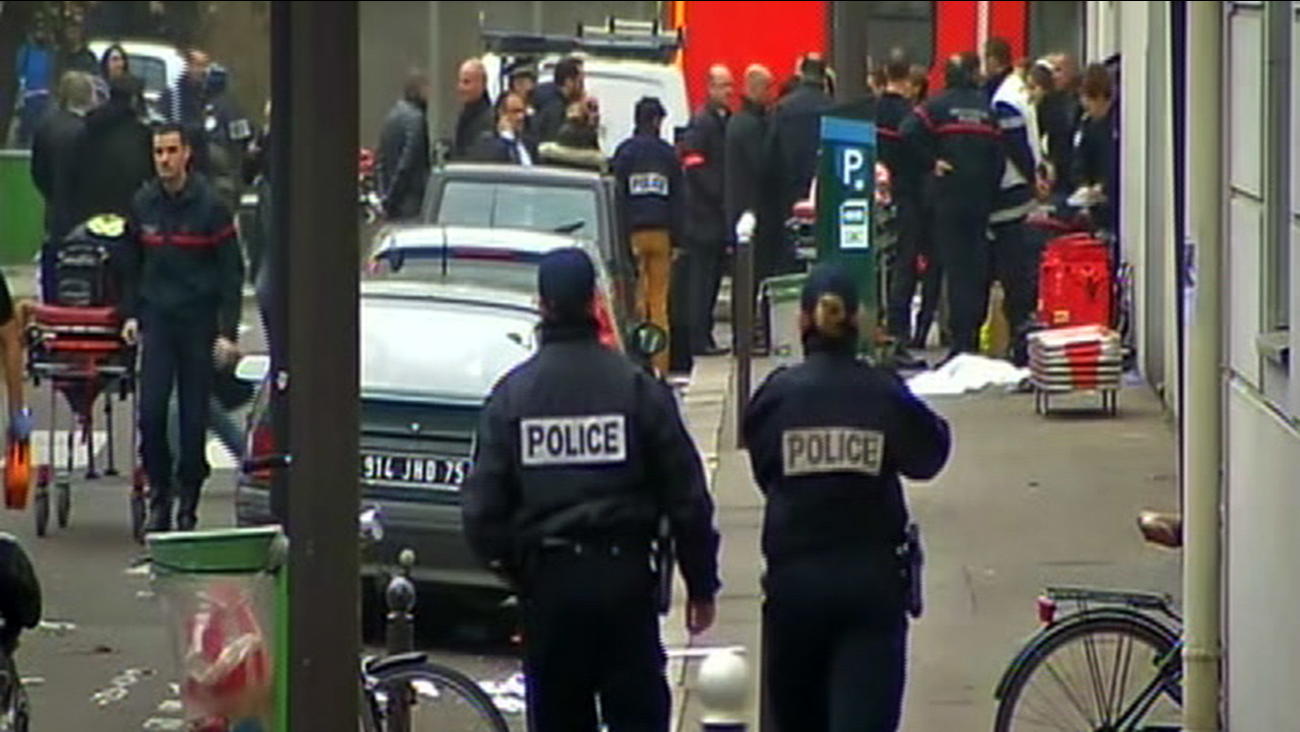 WPVI
PARIS (WPVI) -- Bulgarian authorities said Tuesday they have arrested a French citizen believed to have links to one of the Kouachi brothers, while in Paris President Francois Hollande led an homage to three slain police officers.

Fritz-Joly Joachin, 29, was arrested under two European arrest warrants, one citing his alleged links to a terrorist organization, and a second for allegedly kidnapping his 3-year-old son and smuggling him out of the country, said Darina Slavova, regional prosecutor of the southern province of Haskovo.

Speaking on the private Nova TV channel, Slavova said the first warrant cited his possible association with one of the attackers, Cherif Kouachi.

In Paris ceremony, Hollande went first to the family of Ahmed Merabet, the French Muslim policeman killed in the attack on the offices of Charlie Hebdo. The satirical newspaper lampooned religions and had been threatened repeatedly for its caricatures of the Prophet Muhammad.

The cover of Charlie Hebdo on Wednesday will depict Muhammad, weeping and holding a sign with the words "I am Charlie."

Seventeen people were killed in the attacks, along with the three gunmen. The attacks decimated the Charlie Hebdo staff; the other dead included four hostages killed in a kosher supermarket and the three police officers.

French police said as many as six members of a terrorist cell involved in the Paris attacks may still be at large, including a man who was seen driving a car registered to the widow of one of the gunmen.

The country has deployed 10,000 troops to protect sensitive sites - including Jewish schools and neighborhoods - in the wake of the attacks that killed 17 people last week.

Brothers Cherif and Said Kouachi and their friend, Amedy Coulibaly, were killed Friday by police after a murderous spree at the satirical newspaper Charlie Hebdo and a kosher supermarket. The three all claimed ties to Islamic extremists in the Middle East.

Two police officials told The Associated Press that authorities were searching the Paris area for the Mini Cooper registered to Hayat Boumeddiene, Coulibaly's widow. Turkish officials say she is now in Syria.

One of the police officials said the cell consisted of about 10 members, and that "five or six could still be at large," but he did not provide their names. The other official said the cell was made up of about eight people and included Boumeddiene.

One of the police officials also said Coulibaly apparently set off a car bomb Thursday in the town of Villejuif, but no one was injured and it did not receive significant media attention at the time.

Prime Minister Manuel Valls said the manhunt is urgent because "the threat is still present."