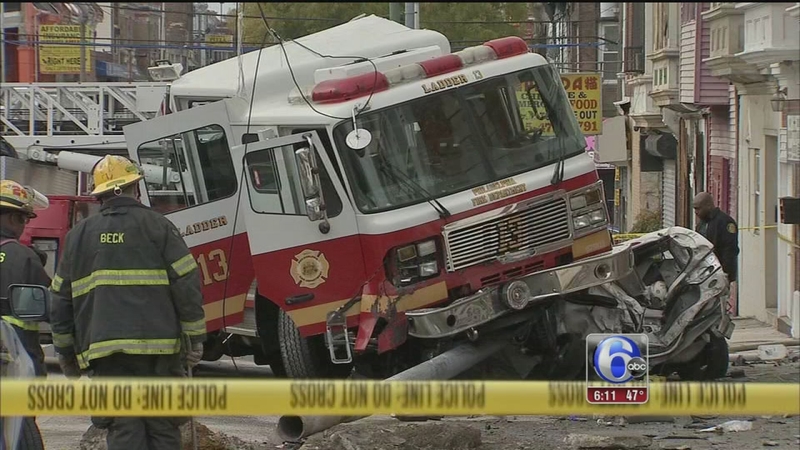 The crash occurred around 10:10 a.m. Sunday at 55th Street and Baltimore Avenue.

Authorities say Ladder 13's cab, carrying a crew of five, was traveling westbound on the 5400 block of Baltimore Avenue when it struck four parked cars.

In surveillance video, the big, red truck appears to slide to its right, slamming into the vehicles, which were unoccupied at the time of the incident. It also took down a utility pole.

Jonathon Smith heard the crash, and ran downstairs from his apartment to be confronted with what had been his 2007 Dodge Charger.

"I came downstairs, and my car is trying to come upstairs," said Smith with a chuckle. 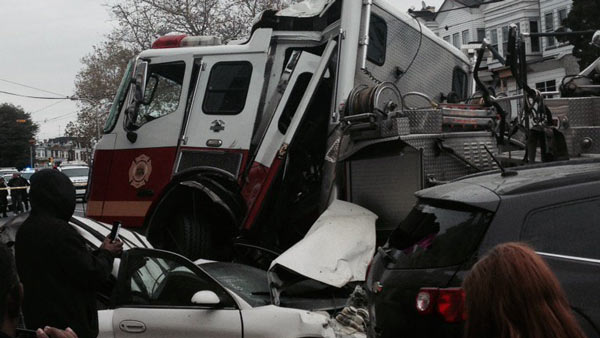 "One firefighter was transported as a trauma transport, that's a term that we use, but I just received the report from Presbyterian Hospital indicating that he and the other four that were transported are in stable condition," said Deputy Chief Jesse Wilson.

Battered and dented, the fire truck was hauled away about four hours after the incident.

So far, it is unknown what caused the crash.

Torres tells Action News he thinks the fire truck was cut off by a vehicle that just drove on.

Another theory is the truck, which was responding to an emergency call, somehow lost control sliding on trolley tracks.

The deputy fire chief said they are ruling nothing in and nothing out.

"I don't want to speculate about that now," said Wilson. "That's why the safety officer is here, and he's going to conduct a thorough investigation."