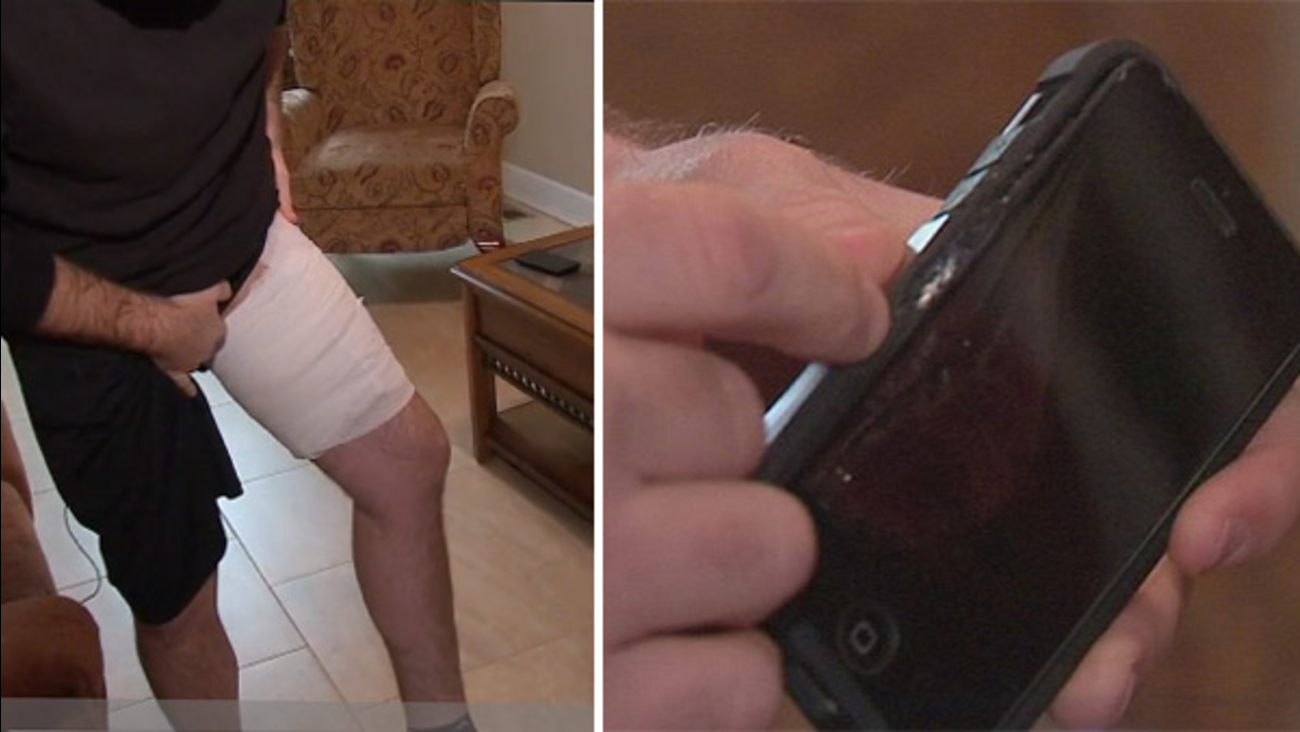 The burns were so severe that he was hospitalized in a burn unit for more than a week.

So how did this happen?

"This is where it came from, the phone right here," said Erik Johnson.

For Johnson it's hard just to explain what he's been through. It's just that hard to believe.

"My iPhone blew up. And everybody's answer is 'What?'" Johnson said.

His iPhone was in his pocket on Valentine's Day, when he says it spontaneously exploded, just moments after he and his brother arrived at their cousin's wake.

"I had the phone in my pocket. Simple little gesture - bent over to get keys - and all I heard was pop. Sssssh smoke coming out," Johnson said.

"And just like an instant burn, my leg just starts going on fire," he continued. "Try to get it out, can't get it out. I was literally jumping up and down trying to get the phone out of my pocket, but I think the phone melted my pockets shut so I couldn't get into it. And I had to rip my pants off and throw the pants to the side. A couple of people actually said they could smell my body burning."

With second and third degree burns on his inner thigh, Johnson spent 10 days in the burn unit before finally getting back home Tuesday. A nurse visits twice a day to change his bandage.

The damage is obvious on the front of the iPhone 5C. But you really have to turn it over to see just how hot it got. The metal case is warped. It's now stuck to the phone right now. And as hard as it might be to believe that this happened, it turns out that from time to time, smartphones explode.

"The important thing to keep in perspective is that there have been millions of phones sold in the last year. The rate of failure is marginal. It's infinitesimal," said Ronald Gerber, CEO of Angelbeat.

But Gerber says the tiniest bit of damage to a phone's circuit board, or the use of third party charging devices, can cause the battery to overheat and spew lithium lava.

But in this case, Johnson says he used an Apple cable for his iPhone. Mike Della is his lawyer.

"Obviously Apple has to take a closer look at what they're putting out in the stream of commerce before they go out and sell these items that could potentially be this dangerous," Della said.

"I just want my leg back to what it was you know?" Johnson said.

As Johnson heals, Apple told 6abc's sister station, WABC-TV, that it's looking into the case.