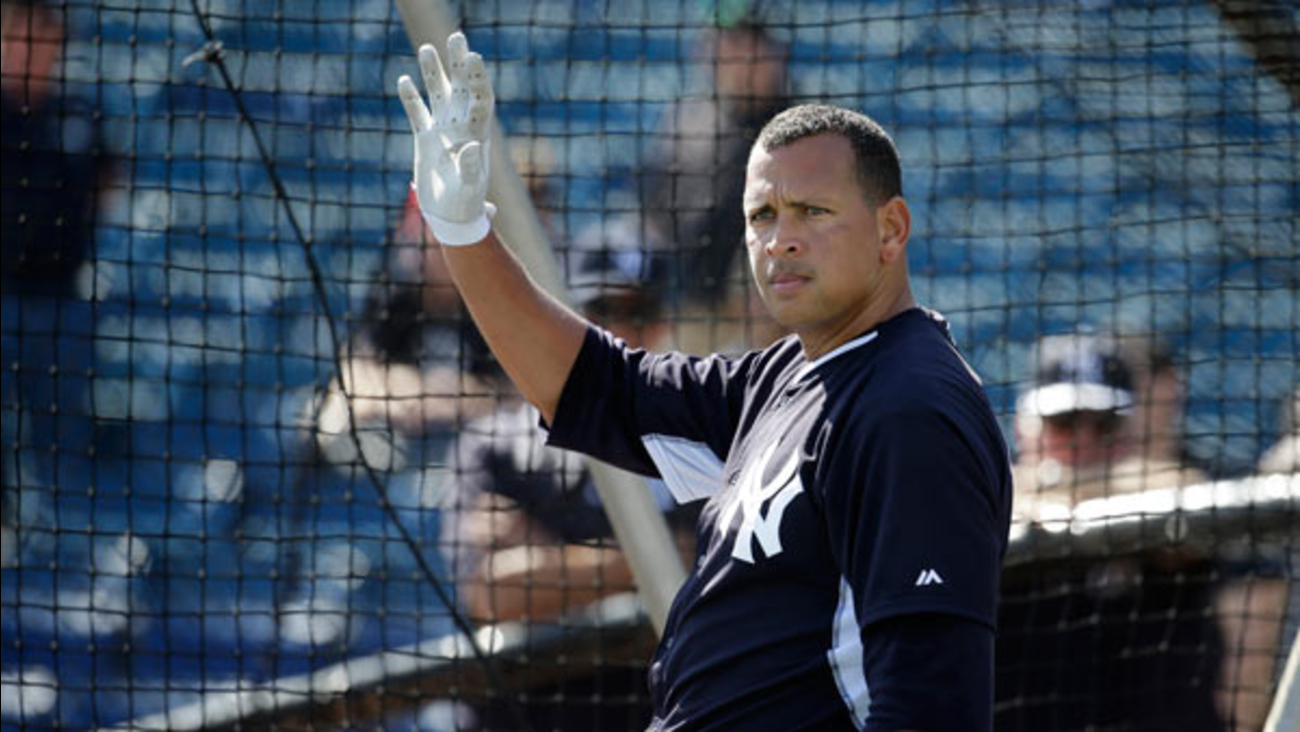 New York Yankees' Alex Rodriguez waves as a fan calls out his name during batting practice before an exhibition spring training baseball game against the Philadelphia Phillies. (AP Photo/Lynne Sladky)

TAMPA, Fla. -- Alex Rodriguez walked from the batter's box to home plate in the bottom of the first inning, eye black smeared across his face, and said hello to Philadelphia catcher Tommy Joseph, who was just 1 when A-Rod was taken first in the 1993 amateur draft. Then he turned his head and greeted umpire Marty Foster.

"I told Marty and Tommy to take it easy on the old man," Rodriguez explained. "It's been a couple of years since I've been in the box."

Rodriguez lined a single to left field in his return to the New York Yankees' lineup after an absence of 524 days. He went 1 for 2 with a walk in a 3-1 spring-training loss to the Philadelphia Phillies on Wednesday, another step forward as he tries to resume his drug-scarred career.

A-Rod was greeted by a 10-second mix of boos and cheers from the crowd of 9,673 at Steinbrenner Field on a sunny, 80-degree afternoon. Rodriguez had not played since September 2013, four months before an arbitrator said he must serve a one-year suspension imposed for violations of baseball's drug agreement and labor contract.

"Once you hit rock bottom, any time you hear a few cheers these days is a pleasant surprise," he said.

He wore the Yankees' traditional white uniform with pinstripes for the team's exhibition season home opener. Rodriguez swung at the first four of 10 pitches he saw in three plate appearances. Batting second as New York's designated hitter, he swung past a pair of 91 mph pitches from Philadelphia's Kevin Slowey in the first.

He lined a soft single to left on an 89 mph 0-2 offering that was over the plate, ran to first, handed his batting gloves to coach Tony Pena and smiled widely.

"It's probably the first spring training game in a long time that he's been a little anxious," Yankees manager Joe Girardi said.

When Rodriguez came up again in the third, he grounded a first-pitch 96 mph fastball from Paul Clemens to shortstop for an inning-ending forceout. He walked on a full count in the sixth against Ethan Martin, loading the bases with no outs and the Yankees trailing 2-0.

He has a little more than a month to show he should be in the lineup when the Yankees open their season at home against Toronto on April 6.

"It's going to take two or three weeks for me to kind of get a gauge where I am," Rodriguez said.

There appeared to be few if any fans wearing shirts with Rodriguez's No. 13; there was a scattering of spectators with the No. 2 of Derek Jeter, the Yankees captain who retired at the end of last season.

New York did not have any Rodriguez merchandise on display in its gift shop behind home plate. Girardi understands the conflicted reception.

"It was mixed, and it's probably going to be that way," he said. "It's nothing new for him. He's had to deal with it for a long time now. He knows how to block it out and prepare himself."

Phillies: LF Grady Sizemore was hit on the right knee by a Kyle Davies pitch in the fourth and left for a pinch runner later in the inning. "Just precautionary," Phillies manager Ryne Sandberg said.

Phillies: Slowey, the winner, retired all six batters he faced other than Rodriguez. He threw 20 of 30 pitches for strikes.

Yankees: Nathan Eovaldi, obtained from Miami in a December trade, took the loss. He gave up one run and two hits in two innings, allowing Cord Phelps' RBI single in the second. "I felt strong going out there. That's everything I wanted to work on," Eovaldi said. ... RHP Masahiro Tanaka threw 30 pitches in a bullpen and will next pitch a simulated game.

YOU'RE THE TOP: Odubel Herrera, a 23-year-old who reached Double-A last year, had three singles from the leadoff spot for the Phillies, reached on an error and stole three bases - including second and third in the third inning against Andrew Miller. "A spark plug at the top," Sandberg said. "Real heads- up plays with the stolen bases. He definitely brings that element to the lineup."