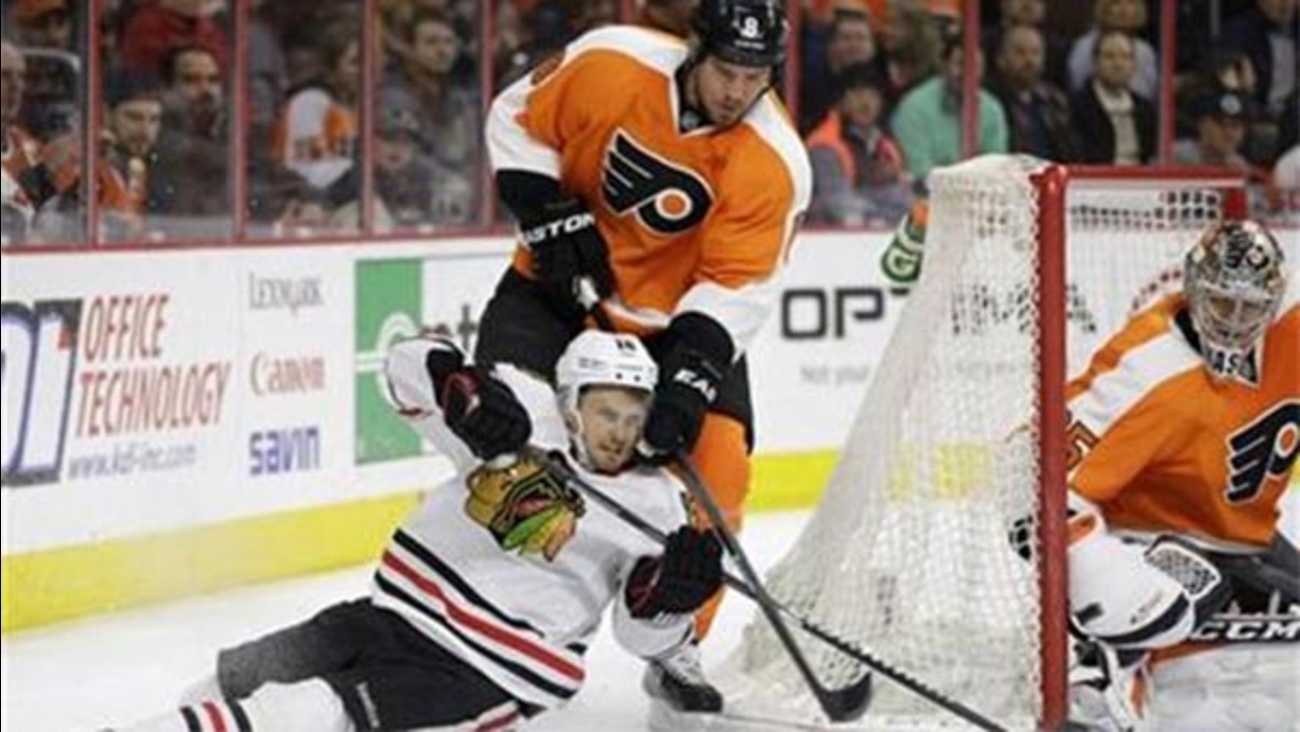 Alone on the ice, Timonen waved his stick toward the crowd and took a final spin for his former home fans.

Back in a Blackhawks uniform, Timonen was still treated like a true Flyer.

Claude Giroux, Wayne Simmonds, Ryan White and Michael Raffl scored goals to lead the Philadelphia Flyers to a 4-1 win over the Chicago Blackhawks on Wednesday night.

Flyers fans gave Timonen several standing ovations, including during a video tribute for the returning Chicago defenseman who helped lead Philadelphia to the 2010 Stanley Cup final.

"That's one of the coolest things as a player you can experience," Timonen said. "I just want to say thanks to the fans. It was awesome."

Timonen returned to Philadelphia for the first time since he was traded to Chicago in February for two draft picks. Timonen's Philly career ended because of blood clots that sidelined him all season until he was traded.

Timonen, who joined the Flyers in 2007, had said he would retire at the end of the season and wanted to go out with a playoff contender. Long out of the postseason picture, the Flyers granted his wish once he was cleared to skate.

The four-time All-Star waved to the crowd and players on both sides tapped the ice with their sticks during video highlights in the first period.

"Everything's been unusual," Timonen said. "I'm trying to find my game. It's been a process the last three weeks. We have a really good team. Even if I play 10, 12 minutes a game, we win games. I have to remind myself the reason why I'm here. It's not to play 20 minutes, it's to help this team as much as possible. The playoffs and the Stanley Cup is the biggest thing."

Giroux had his 22nd goal for his first even-strength score at home this season. Steve Mason was stout again for the Flyers, finishing with 34 saves.

Andrew Shaw scored for the Blackhawks.

The Flyers beat the Blackhawks at home for the 11th straight time during the regular season, dating to Nov. 9, 1996.

However, Chicago won in Philadelphia in Game 6 of the 2010 Stanley Cup final to clinch the championship. The Blackhawks won the Cup again in 2013 while the Flyers are still chasing their first title since 1975.

For a night, this game had as close to a playoff feel as the Flyers will get this season.

Simmonds scored his 100th career goal as a Flyer in the first period for a 1-0 lead.

"I think we were making smart decisions with the puck," Simmonds said. "One of the biggest things we talked about before the game was we have to be smart with the puck and to have smart puck management. We haven't made too many turnovers in the neutral zone or trying to do anything fancy."

Minutes after Simmonds scored his team-high 28th goal, the Flyers aired the tribute to Timonen.

"It was kind of tear-jerking," Simmonds said. "Kimmo is an awesome player and he's even a better person so that made it even better."

Simmonds appeared to hurt his left foot blocking a shot later in the game and the Flyers said he will miss the rest of the season.

Flyers fans chanted "Kim-mo! Kim-mo!" in the final minutes and he received another standing ovation when he returned to the ice as the third star of the game.

"I still tried to focus on the game, but it was really hard," he said. "That was the last time I can play in front of the great fans."

White and Giroux both scored in the second period to build a 3-0 lead. Giroux is in the thick of the scoring race, somehow, without a 5-on-5 goal at the Wells Fargo Center before tonight. Giroux, an All-Star this season, had downplayed the dubious distinction. But he tipped the puck over Corey Crawford's glove midway through the second for the 3-0 lead. Jakub Voracek had his 53rd assist on the goal and he continued to make ground on the NHL scoring lead.

"When I scored I knew it, but we were just trying to do some good things out there," Giroux said.

Shaw scored the lone goal for the Blackhawks in the third.

Raffl scored his 19th goal of the season in the final minutes of the game for a 4-1 lead.