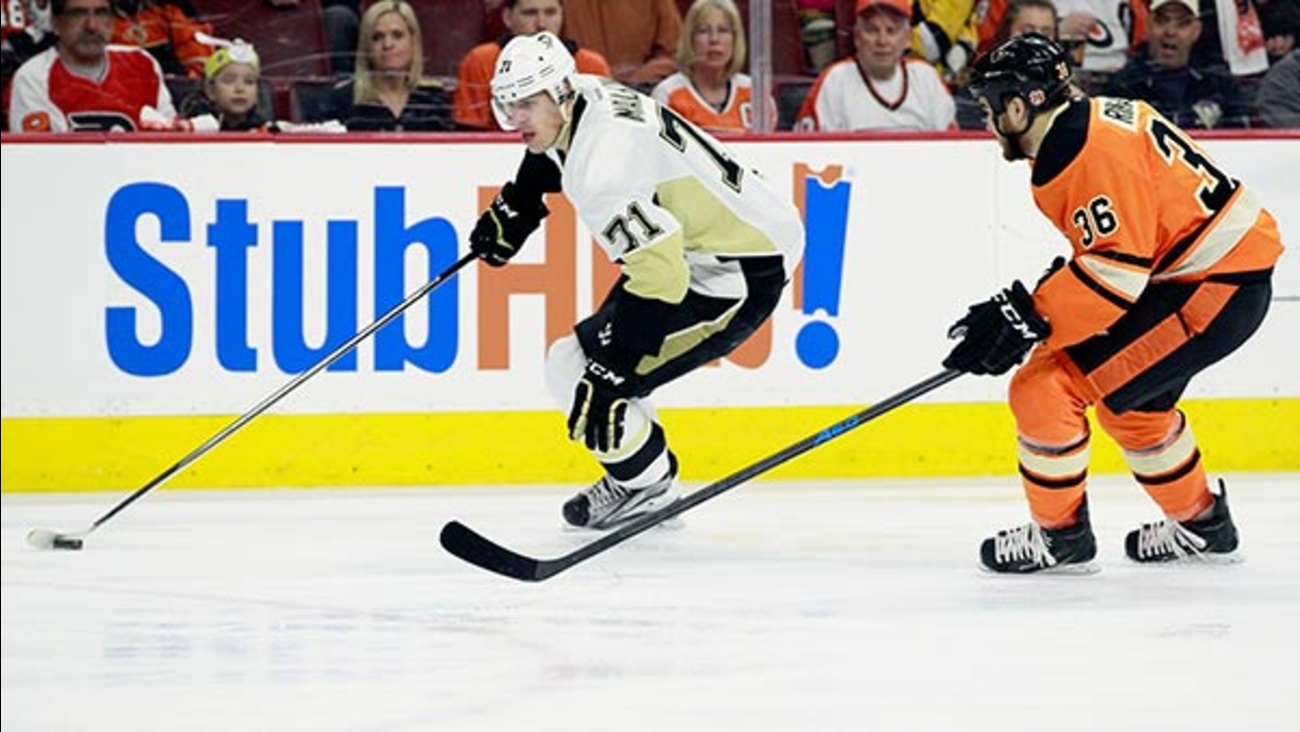 PHILADELPHIA -- Steve Mason made 46 saves, and the Flyers scored on 3 of 4 power-play opportunities to defeat Pittsburgh 4-1 on Sunday.

The Penguins (42-26-11, 95 points) have dropped 10 of their last 13 games and suddenly face the prospect of playing for a postseason spot Tuesday in Ottawa against the Senators.

Philadelphia, which is eliminated from playoff contention, completed a season sweep of its instate rival.

If Pittsburgh fails to make the playoffs, those losses will be partly to blame. The Flyers have eight straight victories overall against the Penguins and are 17-6-2 in the series the past four seasons.

Philadelphia has won in many different ways against Pittsburgh, and on Sunday, Mason led the way. He allowed just a power-play goal by Brandon Sutter late in the first period.

Mason faced 22 shots in the opening period alone, and yet the Flyers went into intermission tied 1-1 after Jakub Voracek scored on a one-timer on the power play in the final minute.

Brayden Schenn put Philadelphia ahead for good in the second period when he re-directed Voracek's shot and the puck popped high in the air before landing on the goal line and sliding into the net. Schenn finished the game with three points.

With a goal and an assist, Voracek moved to within two points of Sidney Crosby for the overall scoring lead in the NHL.

Things got feisty in the third period after Pittsburgh's Chris Kunitz fired a shot at the Flyers' net on a delayed penalty, leading to a scrum in front of the benches.

Mason was superb as the Penguins went after the tying goal, stopping all 12 shots in the final period.

Ryan White got the Flyers an insurance goal when he took a no-look pass from Sean Couturier and one-timed it past goalie Thomas Greiss. Michael Del Zotto rounded out the scoring in the final seconds with a power-play goal of his own.

NOTES: Referee Paul Devorski officiated his final game in the NHL. Devorski began his career in 1989 and officiated 1,594 regular-season games and 199 playoff games. His brother, linesman Greg Devorski, worked the game with him. . Evgeni Malkin returned to the lineup for Pittsburgh after missing two games with an undisclosed injury. . Crosby was held without a point, snapping his five-game point streak, which was tied for his longest of the season. With his two assists, Flyers D Mark Streit (48 points) moved into the top 10 in scoring among NHL defensemen. . With his assist on the Penguins' goal, D Ian Cole extended his career-best point streak to four games. . Pittsburgh went winless against the Flyers in a season for the first time since 1999-2000.
Related topics:
sportsaction news sportspittsburgh penguinsnhlsportsphiladelphia flyers
Copyright © 2021 by The Associated Press. All Rights Reserved.
TOP STORIES
2 teens shot, wounded in South Philadelphia: Police
Security camera video shows moment of Surfside building collapse
Local man loses over 200 pounds; now helping others get healthy
After year-long battle, Montco gains upper hand against COVID
For some, Florida tragedy triggers memories of 2013 Philly collapse
Carli Lloyd ready to bring home Olympic gold for 3rd time
Airline staffing shortages causing headaches for some travelers
Show More
What to expect in Derek Chauvin sentencing
Here's what happening down the shore this weekend
Biden, bipartisan senators have deal on infrastructure
Second Delco brother sentenced in Old City arson
Nearly all COVID deaths in US are now among unvaccinated
More TOP STORIES News