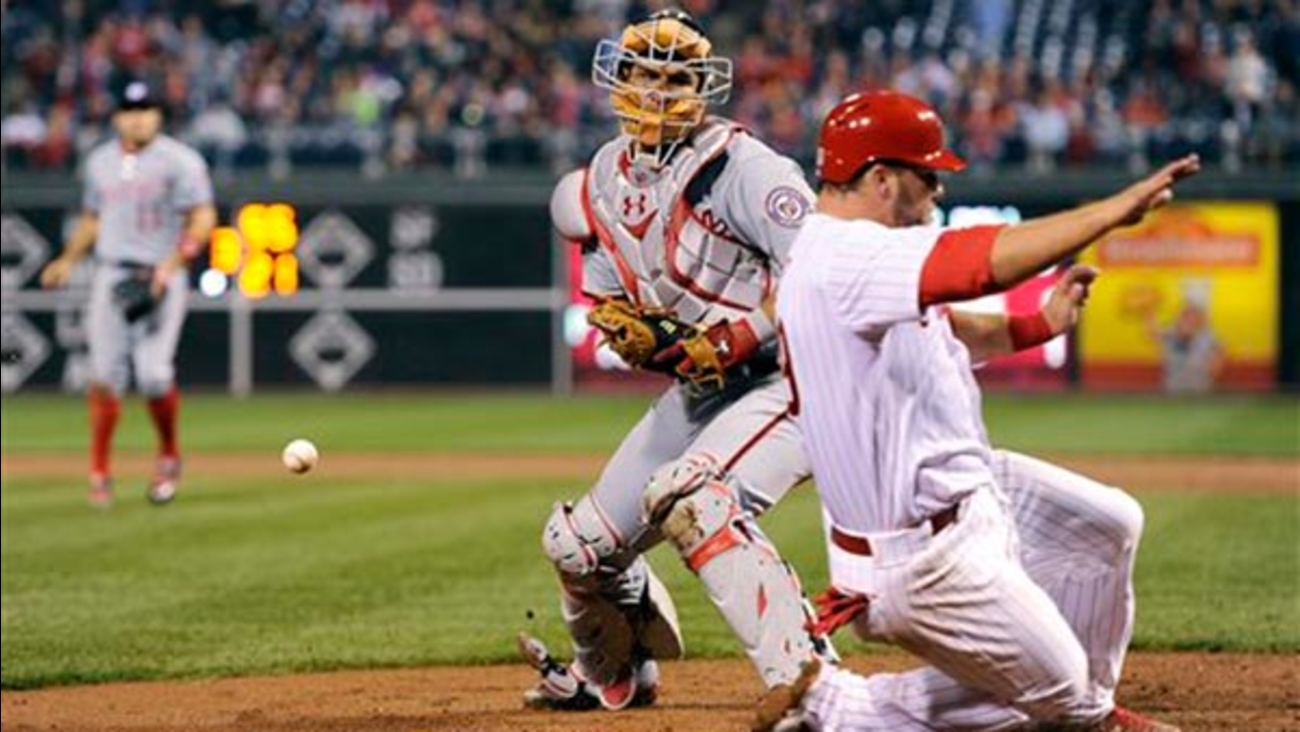 PHILADELPHIA -- Cesar Hernandez had a go-ahead, two-run single in a wild four-run seventh and Freddy Galvis had three hits and an RBI, leading the Philadelphia Phillies to a 4-1 victory over the Washington Nationals on Friday night.

Michael Taylor homered for the Nationals, the preseason favorites in the NL East who have lost three of four to open the year while scoring just seven runs.

Jonathon Papelbon, two days after saying he doesn't "feel much like a Phillie," pitched a 1-2-3 ninth for his second save in as many chances. Papelbon is five saves away from becoming Philadelphia's all-time saves leader.

Chase Utley added an RBI for the Phillies, who were helped by a pair of walks and two hit batters in their rally.

Luis Garcia (1-0) pitched a scoreless seventh inning in relief of Jerome Williams. Williams settled down after allowing Taylor's leadoff homer to yield one run and five hits with six strikeouts and a walk in six innings.

Williams looked like the pitcher who might have salvaged his career by going 4-2 with a 2.83 ERA in nine late-season starts with the Phillies in 2014 that earned him a one-year, $2.5 million deal in the offseason.

Washington's Gio Gonzalez (0-1) gave up three runs on five hits in 6 1-3 innings with four strikeouts and four walks. It was a disappointing debut for Gonzalez, whose 3.57 ERA last year was his worst since 2009. He missed a month due to a left shoulder injury but was feeling good entering this season and pitched well in spring training.

Gonzalez breezed into the seventh, getting Jeff Francoeur to fly out to open the inning before everything unraveled.

Manager Matt Williams visited the lefty after consecutive walks put runners on first and second but left him in. Gonzalez was chased after he hit Andres Blanco to load the bases.

Nationals: OF Jayson Werth was scheduled to make a rehab start at Class-A Potomac for the second straight day, but the game was rained out. Werth, who had offseason shoulder surgery, went 0 for 2 with a walk at Potomac on Thursday. He is expected to play for Potomac on Saturday and could return to the Nationals lineup on Monday.

Phillies: RHP Chad Billingsley struggled during a rehab start at Triple-A Lehigh Valley on Friday, allowing three runs on four hits in 3 1-3 innings. Two of the hits were homers. Billingsley is attempting to come back after two right elbow operations limited him to 12 innings in 2013 and cost him all of last year. In eight seasons with the Dodgers, Billingsley was 81-61 with a 3.65 ERA. He could rejoin Philadelphia's rotation later this month.

Nationals: RHP Doug Fister makes his season debut on Saturday against Philadelphia after a career-best season last year when he went 16-6 with a 2.41 ERA in 25 starts. Fister is 2-2 with a 2.60 ERA in four career starts against the Phillies.