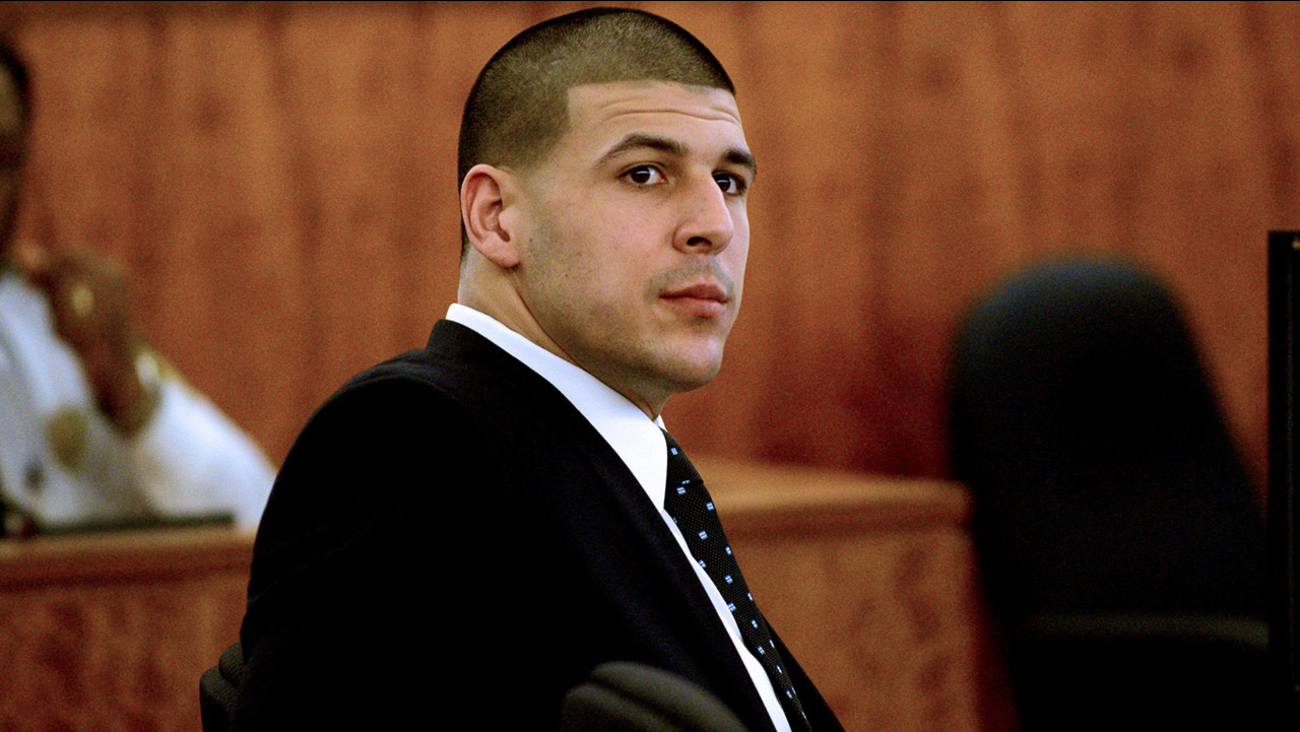 FALL RIVER, Mass. -- Former New England Patriots star Aaron Hernandez was found guilty Wednesday of first-degree murder in a deadly late-night shooting, sealing the downfall of an athlete who once had a $40 million contract and a standout career ahead of him.

Hernandez, 25, looked to his right and pursed his lips after the jury forewoman read the verdict, convicting him in the slaying of Odin Lloyd, a 27-year-old landscaper and amateur weekend football player who was dating the sister of Hernandez's fiancee. The first-degree murder conviction carries a mandatory sentence of life in prison without parole.

Hernandez's mother, Terri, and his fiancee, Shayanna Jenkins, cried and gasped when they heard the verdict. Jenkins wept on his mother's shoulder. Hernandez later mouthed to them: "Be strong. Be strong."

The former football pro was also found guilty on both weapons charges he faced. The jury deliberated for 36 hours before rendering its verdict.

For reasons that were never made clear to the jury, Lloyd was shot six times in the middle of the night on June 17, 2013, in a deserted industrial park near Hernandez's home in North Attleborough.

Police almost immediately zeroed in on Hernandez because they found in Lloyd's pocket the key to a car the NFL player had rented. Within hours of Hernandez's arrest, the Patriots cut the former Pro Bowl athlete, who was considered one of the top tight ends in the game.

Prosecutors presented a wealth of evidence that Hernandez was with Lloyd at the time he was killed, including home security video from Hernandez's mansion, witness testimony and cellphone records that tracked Lloyd's movements.

Hernandez's lawyer, James Sultan, acknowledged for the first time during closing arguments that Hernandez was there when Lloyd was killed.

But the attorney pinned the shooting on two of Hernandez's friends, Ernest Wallace and Carlos Ortiz, saying his client was a "23-year-old kid" who witnessed a shocking crime and didn't know what to do. Wallace and Ortiz will stand trial later.

Prosecutors have suggested Lloyd may have been killed because he knew too much about Hernandez's alleged involvement in a deadly 2012 drive-by shooting in Boston. But they were not allowed to tell the jury that because the judge said it was speculation.

As a result, they never offered a motive beyond saying Hernandez appeared angry with Lloyd at a nightclub two nights before the killing.

Hernandez faces further legal trouble: He is awaiting trial on murder charges in the drive-by shooting. He is accused of gunning down two men over a spilled drink at a nightclub.

In the Lloyd killing, the defense argued that investigators fixated on Hernandez because of his celebrity and conducted a shoddy investigation in their zeal to confirm their suspicions.

Prosecutors said Hernandez organized the killing, summoned his two friends to help carry it out, and drove Lloyd and the others to the secluded spot in the industrial park. During closing arguments, prosecutors also accused Hernandez of pulling the trigger, though under the law it was not necessary to prove who fired the shots to convict him.

Security video from inside Hernandez's home showed him holding what appeared to be a gun less than 10 minutes after Lloyd was killed. The surveillance system also captured Hernandez, Wallace and Ortiz relaxing at his home hours after Lloyd was shot, hanging out in the basement "man cave," lounging by the pool and cuddling Hernandez's baby daughter.

Hernandez was an All-American out of the University of Florida who was drafted by the Patriots in the fourth round in 2010.