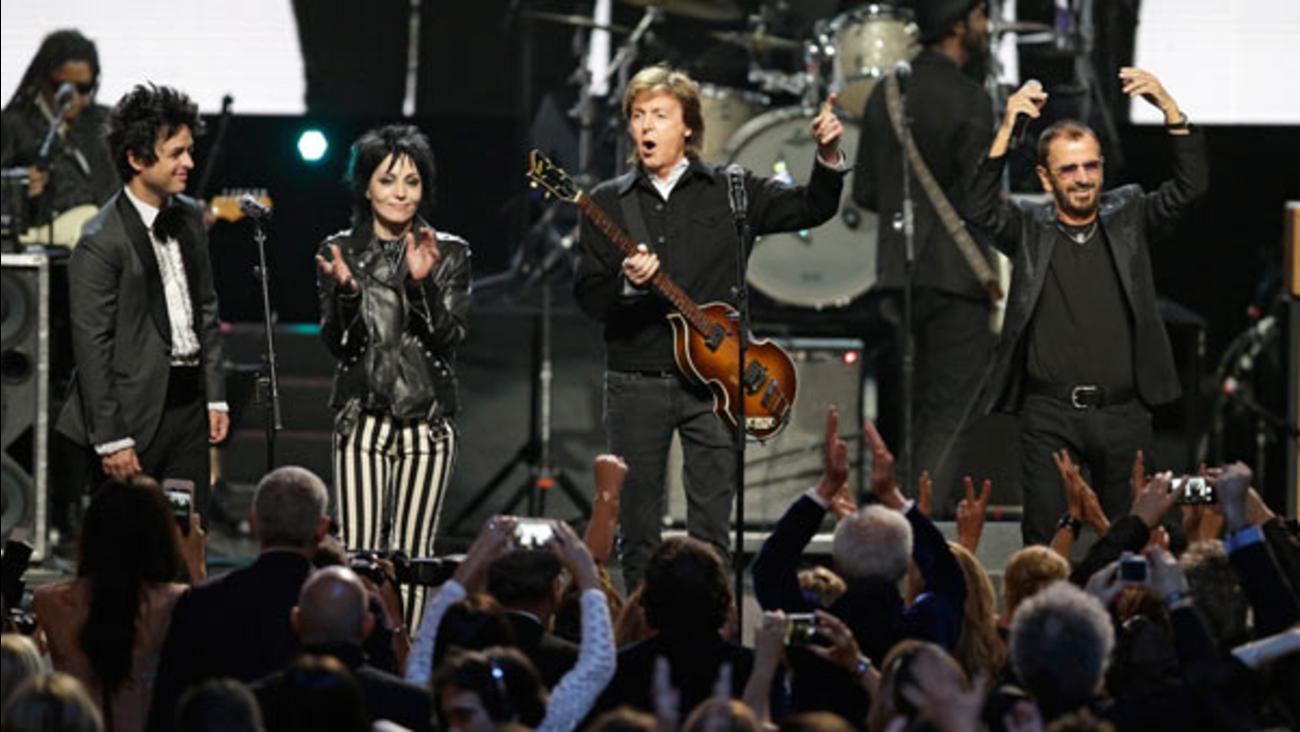 CLEVELAND -- Ringo Starr was ushered into the Rock and Roll Hall of Fame with a little help from one of his famous friends.

The mop-topped drummer who kept the beat for the Beatles, Starr was inducted into the Rock and Roll Hall of Fame as a solo artist on Saturday night during a ceremony jammed with scintillating performances and touching moments.

Starr was the last of the Beatles to be inducted for his individual work, getting in after bandmates Paul McCartney, John Lennon and George Harrison. He was always the fourth Beatle - John, Paul, George ... and Ringo - but now he's been immortalized as a frontman.

The 74-year-old Starr was inducted by McCartney, who said he could always count on Starr to have his back on every song.

"You don't have to look with Ringo," McCartney said. "He's there."

Starr, amazingly fit and looking 20 years younger than his age, then stepped to the podium and said: "My name is Ringo and I play drums" - as if anyone didn't know.

He was then joined on stage by Eagles guitarist Joe Walsh on "It Don't Come Easy" before McCartney came out to play bass, the two living Beatles jamming again, to "A Little Help From My Friends."

The evening concluded, as it always does, with an all-star jam, this time to "I Wanna Be Your Man."

With plenty of punk attitude and energy, Green Day thrashed its way into the Rock Hall.

The Bay Area trio, which formed as teenagers and helped make punk rock radio friendly in the 1990s, briefly turned the star-studded event into one of their high-intensity shows with a powerful set of some of their most memorable hits.

From the opening power chords of "American Idiot," Billie Joe Armstrong, Mike Dirnt and Tre Cool had the crowd at Cleveland's Public Hall bouncing and dancing in the aisles.

Brash and belligerent, Green Day blasted onto the music scene just as Seattle's grunge sound was growing stale. The band borrowed riffs from punk pioneers like The Stooges and Sex Pistols, flavored them with some power chords and pop hooks and helped redefine a genre.

Reed was both daring and provocative as a songwriter and lyricist, pushing boundaries with ballads about forbidden subjects like drugs, prostitution and suicide. Reed's songs like "Walk On The Wild Side," ''Vicious" and "Heroin" remain vibrant today. Although he died in 2013, Reed continues to influence a young generation of musicians touched by his rebel ways.

Patti Smith remembered Reed the poet and recalled being at Rockaway Beach when she got the news of his death. She rode the subway back to New York City, Reed's city.

"People were crying on the street," Smith said. "You could hear his voice coming out of cafes. Everyone was playing his music. ... Thank you, Lou, for brutally and benevolently injecting poetry into your music."

Withers was inexplicably left off the hall's ballot for years, perhaps an unfortunate oversight. But the 76-year-old, who walked away from the music industry in the 1980s, is now part of musical royalty with a catalog of timeless songs like "Lean On Me" and "Just The Two Of Us." Stevie Wonder said he would often hear Withers' music and say, "I wish I could have written that song."

Withers was humbled Wonder would be the one to induct him.

"It's like a lion opening the door for a kitty cat," he said.

Wonder performed "Ain't No Sunshine" with Withers sitting next to him on stage enjoying every second. Withers, who has rarely performed in public over the past three decades, then helped sing the "Lean On Me" chorus with John Legend.

Jett couldn't keep her rough rocker edge for long. After being introduced, Jett, the black-leathered girl you might not bring home to meet your mom, was moved to tears.

"I tried not to cry and be tough," she said, her black mascara starting to run.

Jett opened the show with a rip-roaring version of "Bad Reputation" and was joined by Foo Fighters frontman and former Nirvana drummer Dave Grohl for a blistering "Cherry Bomb," one of her hits with The Runaways, a band that broke down barriers for women in rock.

Sadly, Vaughan died in 1990 at the height of his blossoming career in a helicopter crash. Armed with his signature Stratocaster, the Texas bluesman was an unstoppable force on six strings.

John Mayer called it the "honor of a lifetime" to induct Vaughan, whom he called "the ultimate guitar hero."

"Stevie used his guitar to lead him out of town," said Mayer, who later traded licks on "Texas Flood" with Gary Clark Jr. "He gave me hope because heroes give you hope. While Jimi Hendrix came down from outer space, Stevie came up from below the ground."

HBO will broadcast the event on May 30.