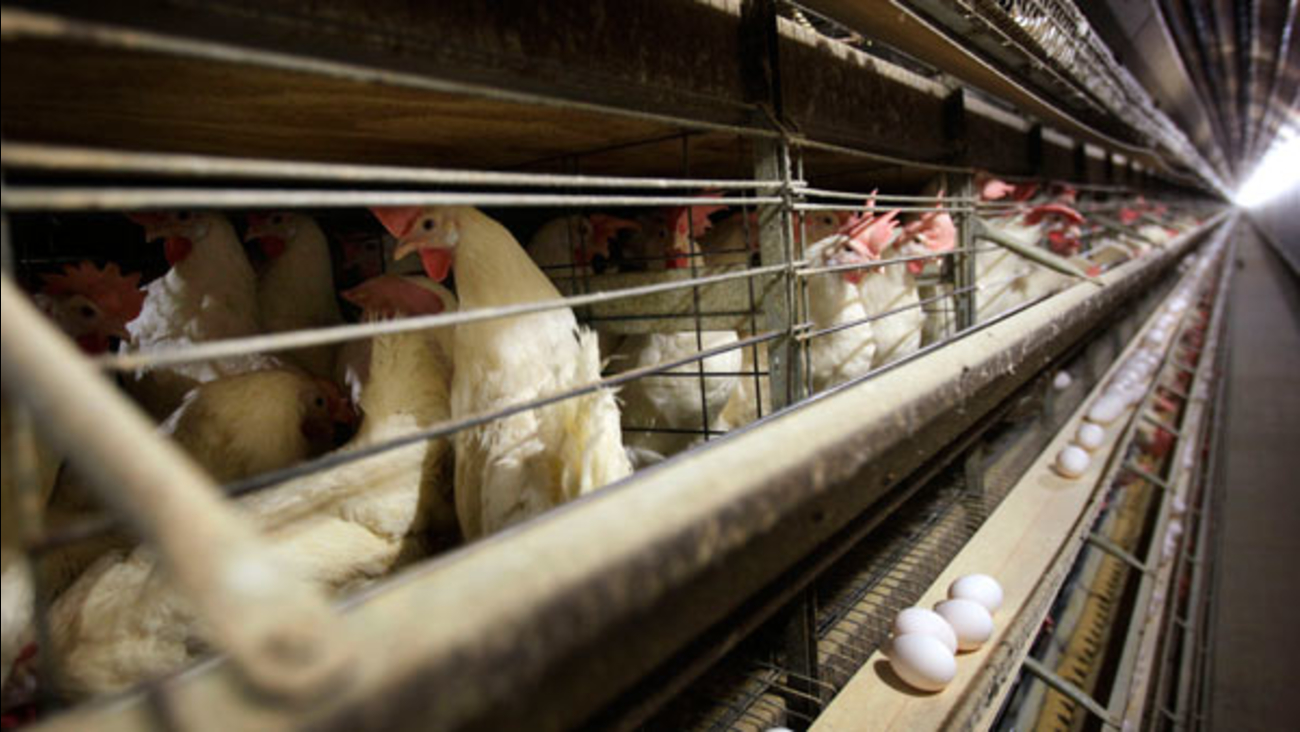 FILE - In this Nov. 16, 2009 file photo, chickens stand in their cages at a farm near Stuart, Iowa. (AP Photo/Charlie Neibergall, File)

MINNEAPOLIS, Minnesota -- Poultry producers and scientists have been hoping warmer weather would knock down a virulent strain of bird flu that has hammered the Midwest, but the virus recently took its biggest toll yet, hitting a farm in Iowa that held more than 5 percent of the state's egg-laying chickens.

Here are some questions and answers about the outbreak:

The U.S. Department of Agriculture said the deadly H5N2 bird flu virus was found at a farm in northwest Iowa's Osceola County.

The confirmation means 3.8 million hens there must be destroyed in a state that produces one in every five eggs consumed in the country.

Seven other Midwestern states have been hit by the virus, dooming nearly 6.3 million turkeys and chickens since March.

U.S. Department of Agriculture officials say the virus could be a problem for several years.

The USDA's chief veterinary officer, Dr. John Clifford, also said last week that while new cases should drop to close to zero once the weather warms up and kills off the virus, there's "very likely" to be a resurgence this fall when the wild waterfowl that are natural carriers of avian influenza fly south for the winter.

WHAT KIND OF FLU IS THIS, EXACTLY?

H5N2 is a highly contagious virus that kills commercial poultry quickly once it gets into a barn.

But the risk to the public is considered low, and infected birds are kept out of the food supply.

WHERE IS THIS TURNING UP, AND IN WHAT KINDS OF BIRDS?

Only two egg operations have been hit - the one in Iowa and one in Wisconsin.

Except for a couple of backyard flocks, all the other cases in the Midwest have been at commercial turkey farms.

Minnesota has had 28 turkey farms hit, far more than any other state.

Officials say that's because Minnesota is the top turkey-producing state, and its thousands of lakes and ponds are attractive to migrating ducks and other waterfowl.

H5N2 and other highly pathogenic strains have also been found since late last year among wild birds, backyard flocks and commercial farms in some western states and British Columbia.

They are. Poultry farms with good biosecurity strictly limit who's allowed in.

Workers often have to shower on their way in and out, wear protective coveralls and step in disinfectant to kill viruses on their boots.

Equipment coming in and out is typically sanitized. But the system doesn't always work. Experts say it requires everyone to do everything right all the time.

Plus rodents and wild birds that sneak into a barn can bring in the virus.

SO WHAT HAPPENS TO THESE TURKEYS WHEN BIRD FLU ARRIVES?

They die, and quickly. Less severe symptoms can be similar to colds and flu in humans, or a flock turning quiet.

Vaccines have been used around the world to protect flocks against various bird flu strains ahead of time, but this strain is new to North America.

Once an infection is confirmed at a farm, all surviving birds on the property are typically killed to prevent it from spreading.

These flocks are usually killed by pumping a water-based foam into the barn, following guidelines from the U.S. Department of Agriculture. The foam suffocates the birds within minutes.

OH. SO WHAT DO THEY DO WITH ALL THESE DEAD BIRDS?

They compost them - usually right in the same barn where they died. Composting is a widely used and approved method throughout the industry to dispose of dead birds.

Studies show that properly done, the heat generated by composting is enough to kill flu viruses and other pathogens commonly present in poultry such as salmonella.

The compost then can be safely spread as fertilizer.

DO THESE OUTBREAKS WIPE OUT AFFECTED FARMS?

An outbreak that kills tens of thousands of birds certainly can cost a farm dearly.

The government doesn't compensate producers for birds that die of the disease itself, but it does reimburse them for birds that have to be euthanized as a precaution.

That gives farmers an incentive to report suspected outbreaks and deal with them swiftly.

SO DOES THIS MEAN I'LL BE PAYING MORE FOR TURKEY, EGGS AND CHICKEN?

Probably not in the near term. The toll nationwide represents just a small part of U.S. production.

Hormel Foods Corp., which owns Jennie-O, said Monday that it will sell less turkey this year because of the outbreaks but that it can't comment now on how retail prices or the holiday season will be affected.

But don't worry about Thanksgiving yet. Turkey prices around the holidays often have nothing to do with the costs of production.

Retailers often sell turkeys at a loss just to draw in customers who'll stock up on stuffing mix, cranberries, sweet potatoes, pies and other traditional favorites.