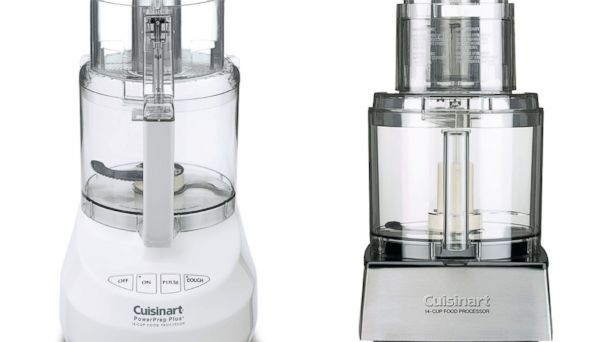 Cuisinart and the U.S. Consumer Product Safety Commission are recalling about 8 million food processor blades in America after receiving reports from consumers of broken blade pieces in their processed food.

Conair, the maker of the Cuisinart food processors, received 69 reports of consumers finding broken pieces of a "riveted blade" in their processed food, including 30 reports of mouth lacerations or tooth injuries, a CPSC press release said Tuesday.

"These are in millions of American homes, including my own," CPSC Chairman Elliot Kaye told ABC News, stressing to consumers how dangerous the product can be.

"You find out that there's a problem when you bite down and you cut your mouth and you break your teeth," Kaye added. "With all the cooking that's going on this holiday season, we're really urging consumers to act immediately."

The blades in question have four rivets, are silver-colored stainless steel and have a beige plastic center hub. The CPSC and Cuisinart note that only food processors with four rivets in the blades are included in this recall.

Any consumer with the affected blade should immediately stop using the food processor and contact Cuisinart for a free replacement blade. Consumers can contact Cuisinart toll-free at 877-339-2534 from 7 a.m. to 11 p.m. Eastern time Monday through Friday and from 9 a.m. to 5 p.m. Eastern time Saturday and Sunday or online at www.cuisinart.com. Click on "product recalls" at the bottom of the page for more information on the voluntary recall.