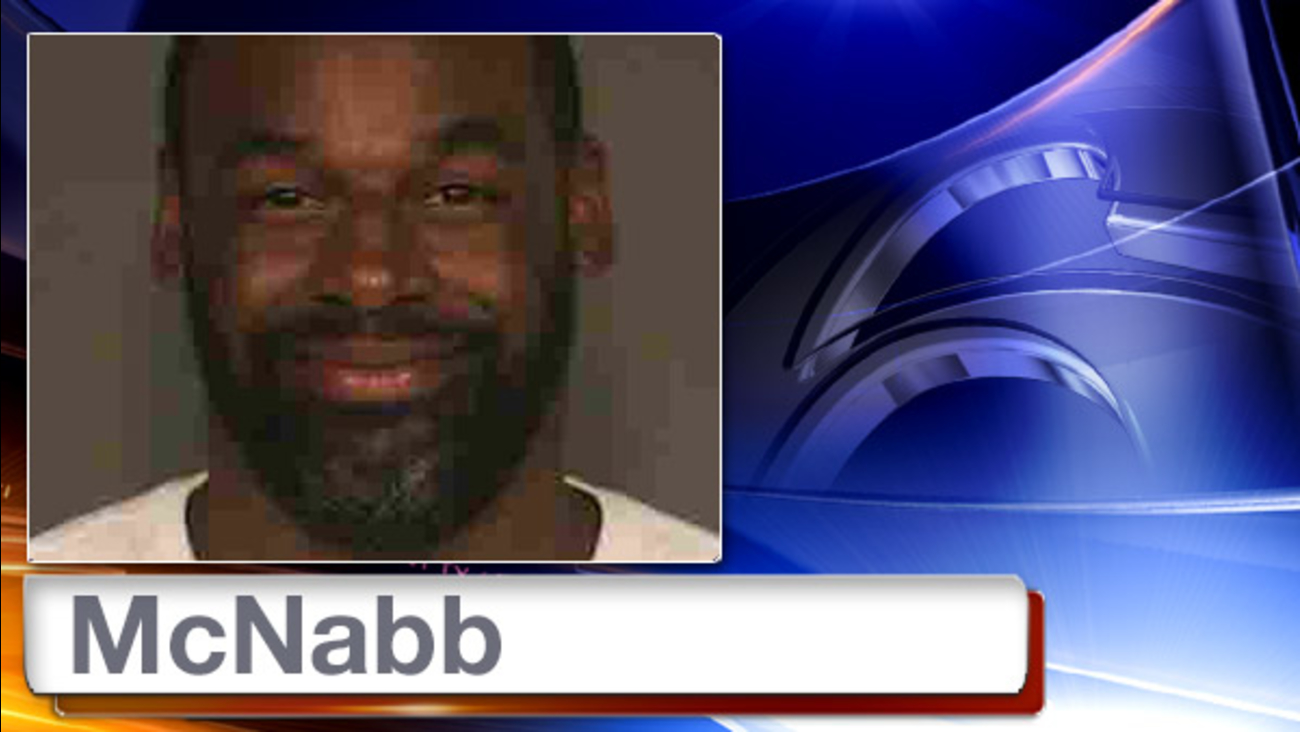 Pictured: Donovan McNabb is seen in a mug shot released by police in Gilbert, Arizona after a DUI arrest on June 28, 2015.

GILBERT, Ariz. (WPVI) -- Former Eagles quarterback Donovan McNabb has been arrested in Arizona on suspicion of driving under the influence of alcohol for the second time in 18 months, according to police documents released Tuesday.

Police in the Phoenix suburb of Gilbert said McNabb was cited and released from a police facility after being arrested June 28 following a non-injury collision late that night.

McNabb, 38, told officers he had just left a sports bar and was driving to his Phoenix-area home.

A police report stated McNabb's vehicle rear-ended a car driven by the wife of a Gila River tribal police officer and McNabb appeared to be impaired.

"While Donovan spoke, I noticed a strong, fruity odor on his breath. I noticed Donovan's eyes were watery and very bloodshot and his speech was slurred," a Gilbert officer wrote in his report.

The officer said he asked McNabb how much alcohol he had to drink.

"Nothing," McNabb said, according to the police report, adding that he had a cold and was taking a cough syrup and eating two cough drops.

The officer made McNabb spit out the cough drops and gave him a battery of tests, noting six signs of impairment. McNabb "was not able to stand without visibly swaying back and forth and side to side in a rotational pattern," the report said.

Police said a blood sample was sent to the Mesa Police Crime Lab for analysis. The results haven't been released.

No phone listing could be found for McNabb in the Phoenix area and it couldn't immediately be determined Tuesday whether he has an attorney who could comment on the allegations.

McNabb served a day in jail in April 2014 after pleading guilty in another DUI case resulting from a Dec. 15, 2013, arrest in the Salt River Pima-Maricopa Indian Community east of Phoenix. He also was ordered to pay a fine of nearly $1,500 and enter an outpatient treatment program in Scottsdale.

McNabb played 13 years in the NFL after being drafted with the second overall pick in 1999.

He led the Philadelphia Eagles to four straight NFC championship games from 2001 to 2004 and one Super Bowl berth that ended in a 24-21 loss to the New England Patriots in 2005.