Bill Cosby's art collection to remain on view at Smithsonian 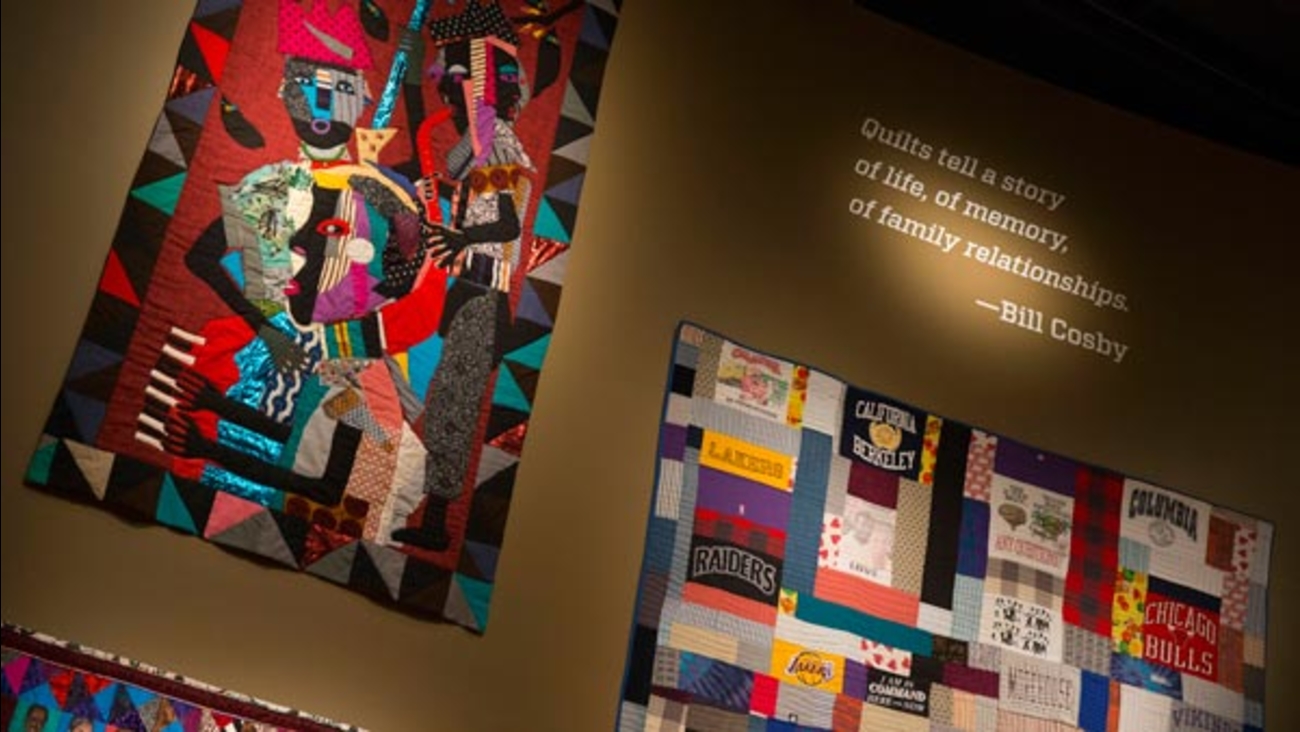 FILE - In this Nov. 6, 2014, file photo, quilts from the Bill and Camille Cosby collection hang at the Smithsonian's National Museum of African Art in Washington. (AP Photo/Evan Vucci, File)

WASHINGTON -- Over the past seven months, as sexual misconduct allegations against Bill Cosby mounted, a top Smithsonian official met privately with museum directors across the sprawling complex on the National Mall to decide what to do about an exhibit showcasing Cosby's private art collection.

While many companies and universities were distancing themselves from the comedian, Smithsonian officials ultimately concluded the exhibit should continue.

"First and fundamentally, this is an art exhibit," Richard Kurin, the Smithsonian's undersecretary for art, history and culture told The Associated Press. "So it's not about the life and career of Bill Cosby. It's about the artists."

About a third of the Smithsonian's National Museum of African Art's 50th anniversary exhibition came from Bill and Camille Cosby's extensive African-American art collection, and two-thirds came from the museum's own collection.

Most of the Cosby collection had never before been seen by the public. It includes paintings by one-time slaves, pieces commissioned for the Cosbys, a piece by Cosby's daughter and quilts made in tribute to Cosby and his slain son, Ennis. The exhibit also includes images of Cosby and quotations from him.

Even without the assault allegations, the exhibit raised concerns. Some critics frown on showcasing a private collection in a prominent museum because it can enhance the artwork's market value. Also, Camille Cosby sits on the museum's board and initiated the loan, which raises questions about conflicts of interest.

Now the Smithsonian has revealed to The Associated Press that the Cosbys also funded the exhibition with a $716,000 gift, which virtually covers the entire cost. Museum industry guidelines call for museums to make public the source of funding when an art lender funds an exhibit, but the Smithsonian did not reveal Cosby's financial gift until Friday, even though the exhibit opened in November.

Noah Kupferman, an art market expert at Shapiro Auctions who has taught about the economics of fine art, said such financial arrangements are not unprecedented, but museums must be transparent about them.

"It just raises a little eyebrow that a trustee of a museum is lending (her) own collection, funding part of the exhibition and the exhibition is highlighting works ... by less well-known artists whose work is considered by some to be undervalued," he said. "Repositioning these artists' works as suddenly important could have significant positive effect on their economic value."

The exhibit has drawn 150,000 visitors so far, according to the Smithsonian.

A promotion for the exhibit is prominently displayed on Cosby's website even as his reputation has collapsed in recent months amid accusations of sexual misconduct by more than two dozen women. Many of the woman alleged that he drugged and raped them.

Cosby, who turns 78 on Sunday, has never been charged with a crime. He has denied some accusations, while declining to comment or respond to others.

Court documents obtained by The Associated Press revealed Cosby admitted under oath that he obtained quaaludes to give to women with whom he wanted to have sex.

In response to the admission, Walt Disney World removed a statue of Cosby. Bounce TV and Centric networks stopped re-running "The Cosby Show," and some civil rights leaders called for Cosby's star to be removed from the Hollywood Walk of Fame. A sexual assault awareness group has petitioned the White House to revoke Cosby's Presidential Medal of Freedom.

Some art critics have called for the Smithsonian to stop showcasing Cosby's art collection. The museum director, Johnnetta Cole, declined to discuss the exhibit.

Cole, who is also the president of the Association of Art Museum Directors, is close with the Cosbys. At a preview for the exhibition, the Cosbys talked warmly of Cole and recalled how Camille Cosby wrote a $20 million check to Spelman College when Cole was president of the Atlanta school. In December, Spelman suspended its program funded by the Cosbys.

The Smithsonian defended the exhibit on its artistic merits.

"We certainly don't condone his behavior," Kurin said. "We're just as deeply disturbed and disappointed as I think everybody else. But it's not about Mr. Cosby. This is an art exhibit."

The Smithsonian is sensitive about changing exhibits.

In the past, it has removed some controversial pieces of exhibits under pressure, but "we've never taken an exhibit down," said Kurin, who has worked at the museum complex for decades.

In 2010, the Smithsonian was accused of censorship when it removed a video from the National Portrait Gallery exhibit about how sexual orientation and gender identity have shaped American art after complaints from a Catholic group and members of Congress.

An outside review concluded that unless there is an error, changes should not be made to an exhibit once it's opened without a full consultation with curators, museum directors and the Smithsonian's governing board.

For many museum experts and scholars, removing the Cosby exhibit would set a dangerous precedent.

"You'd be sort of stomping all over the curatorial integrity of what you've put up," said Jack Rasmussen, director of the American University Museum. "I think if museums had to investigate the morals of every lender, that would be kind of a new and very difficult situation. Really, it's about the art."

Museums have displayed privately held art collections for decades because they can complement a museum's own collection, said Martha Morris, assistant director of museum studies at George Washington University.

"The only thing that could possibly be a criticism is that once a private collection is on display in an art museum ... it begins to add to its status," Morris said. "That could potentially add to its value if the collector wanted to sell something, for example, or even give it away to a nonprofit for a tax benefit."

But an art loan could also lead to a donation of artwork to a museum, Morris said.

Smithsonian lawyers reviewed the Cosby loan and determined any increase in the artworks' value was a non-issue, in part because the Cosbys did not intend to sell the art, Kurin said.