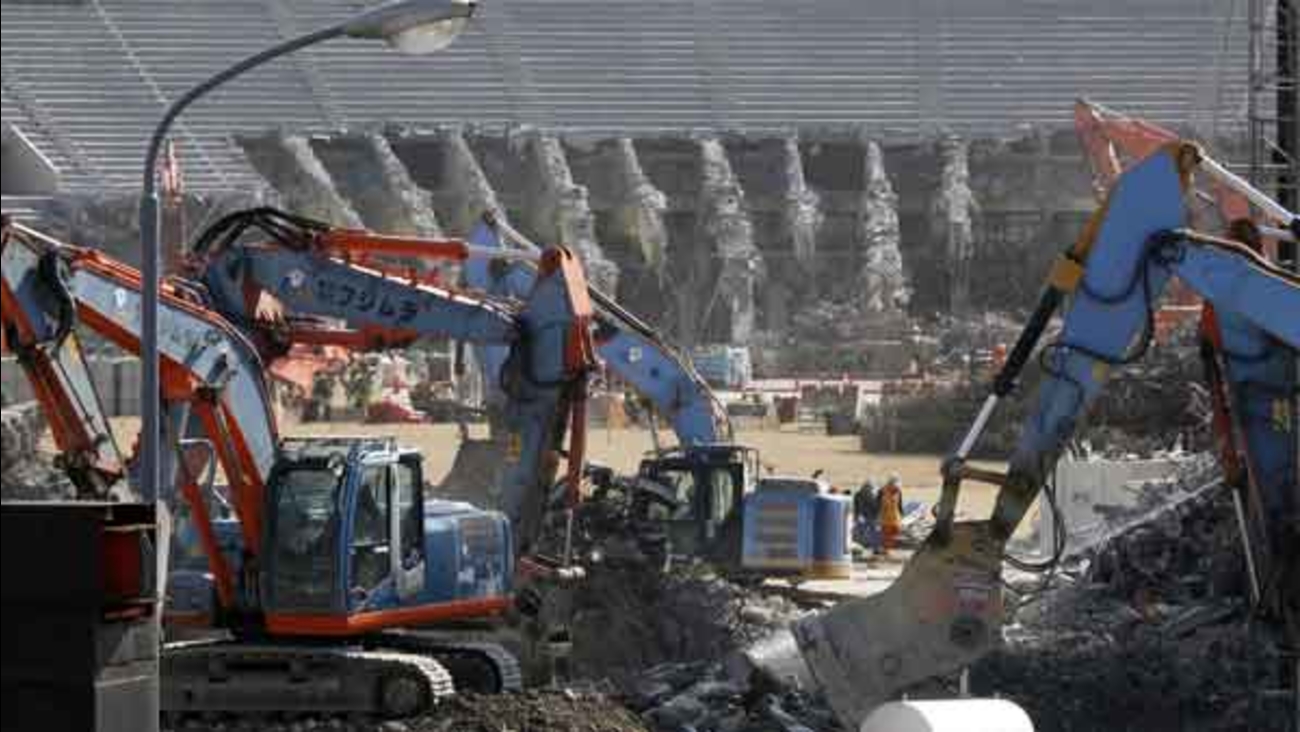 FILE - In this March 5, 2015 file photo, Japan's National Stadium is dismantled for the renovation for the 2020 Tokyo Olympic Games, in Tokyo. (AP Photo/Shuji Kajiyama, File)

TOKYO -- When the dust settles on the marquee venue for the 2020 Summer Olympics in Tokyo, it could well be the most expensive sports stadium in the world.

The latest cost estimate of 252 billion yen ($2 billion at current exchange rates) would push it beyond the current record-holder, the $1.6 billion MetLife stadium completed in 2010 for the New York Jets and Giants football teams.

What is the money buying? The design of the stadium's ribbed roof on huge steel arches resembles a bicycle helmet. To support a natural grass field, the roof's southern end will be translucent to let in sunlight and underground will be soil ventilation and temperature control systems. Movable seats will bring the crowd closer for more intimate events, and this being Japan, the stadium will have earthquake-resistant features.

While exchange rate fluctuations and inflation make comparisons tricky, it is safe to say that Japan's new National Stadium will likely to be the most expensive ever built, two sports economists told The Associated Press. The latest estimate was a 55 percent increase over an earlier one of 163 billion yen.

"The spiraling costs come as no surprise," Victor Matheson, a professor at the College of the Holy Cross in Massachusetts, wrote in an email response. "Most of the recent Olympics Games and World Cups have seen final costs come in far above initial estimates."

Andrew Zimbalist, an economics professor at Smith College in Massachusetts, added that he suspects the cost will rise further during construction, which is due to begin in October.

At least five stadiums costing more than $1 billion have been built worldwide, four for American football and baseball teams and Wembley Stadium for soccer in London. Tokyo's new stadium, designed by award-winning architect Zaha Hadid, would be the first to reach $2 billion. Unlike venues for professional sports teams, which generate a steady revenue stream, Olympic stadiums risk becoming "white elephants," little used after their two weeks of glory.

The rising price tag has put the government of Prime Minister Shinzo Abe on the defensive, at a time when his approval ratings are already slipping because of opposition to his push to expand the international role of Japan's military. It also doesn't bode well for Boston and others bidding for the 2024 Olympics, as well as the International Olympic Committee's goal of making future Olympics more affordable for host cities, Matheson said.

"If a modern city like Tokyo with tons of highly developed infrastructure already in place can't make an Olympics work without breaking the bank, what chance do any other potential host cities have," he wrote.

The IOC has approved changes in plans for other 2020 venues in Japan that have saved more than $1 billion, according to the committee. The main stadium, though, far exceeds the $455 million "Bird's Nest" stadium built for the 2008 Olympics, and the approximately $680 million stadium for the 2012 London Olympics.

Japan is a rich country, but it doesn't have cash to spare. More than two decades of economic stagnation have left the government saddled with debt, and the rapidly aging nation faces soaring pension and health care bills.

Public opinion, already tepid about building a massive new stadium in central Tokyo, has turned decisively negative since the government sharply revised up the project cost. The government though says it's too late to make major changes and still meet a 2019 deadline to host the inaugural event, the Rugby World Cup.

The Japan Sports Council, which is overseeing the project, attributes about one-third of the increase in price to rising labor and materials costs, and two-thirds to the unusual design of the stadium. An increase in the consumption tax rate also added about 4 billion yen.

Asked about the cost, Jim Heverin, the project director for the stadium for Zaha Hadid Architects, said in a statement that the design allows the roof and the spectator stands to be built simultaneously, saving time and money and "ensuring the stadium will be delivered cost-effectively and on schedule against the backdrop of steep annual inflation in Tokyo construction costs."

Japan is no stranger to high-priced venues. The 1998 Winter Olympics in Nagano were by far the most expensive until Sochi, Russia, last year, Matheson said. Japan also held the record for the most expensive World Cup stadium - the $621 million Nissan Stadium that hosted the 2002 final in Yokohama - until Brasilia built a $900 million stadium for the 2014 tournament.

Nissan Stadium remains in use, as the home field for a J-League soccer team, the Yokohama F. Marinos. The Mane Garrincha stadium in Brasilia, however, is now perhaps the world's most expensive bus depot.