Murphy leads Mets to sweep of Phillies, 9-5 in 13 innings 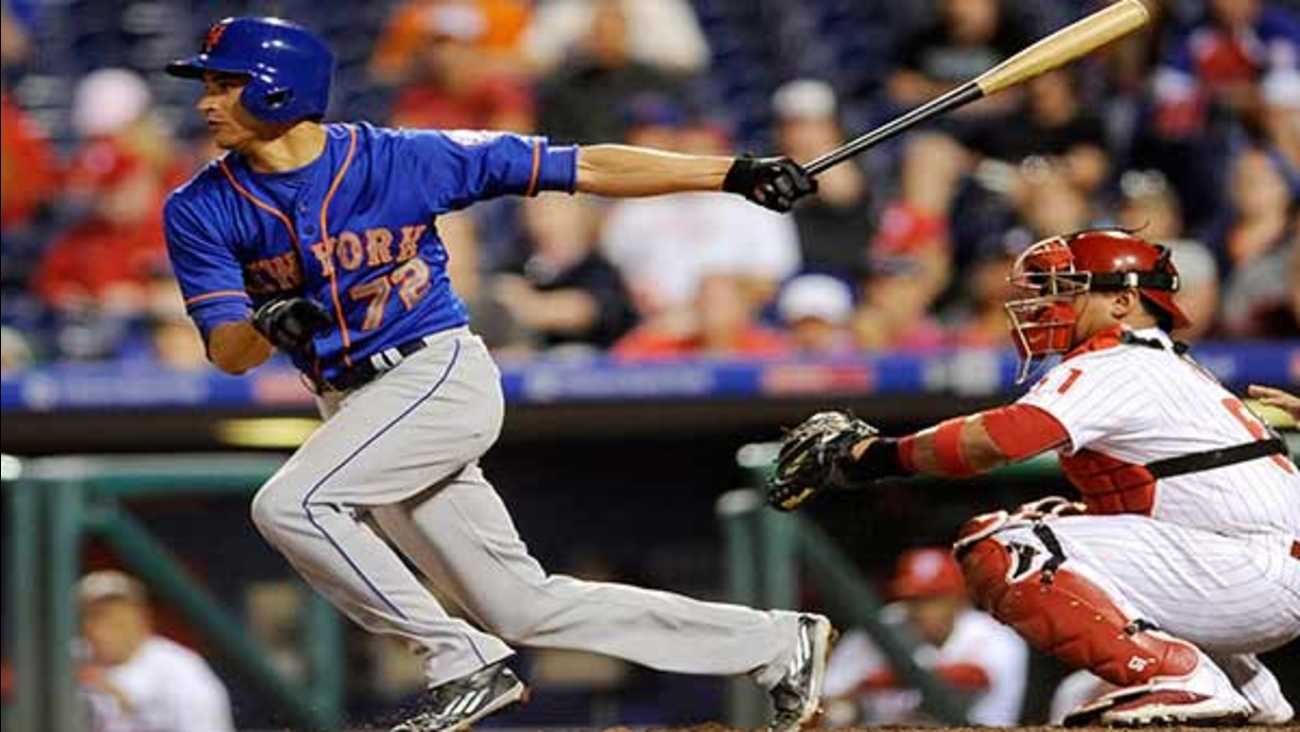 Murphy hit a go-ahead, two-run double in the 13th inning after making a spectacular defensive play to end the 10th, leading New York to its seventh straight victory, 9-5 over the Philadelphia Phillies on Thursday night.

Reliever Carlos Torres led off the 13th with a single to center, went to second on Curtis Granderson's single to left and they both scored on Murphy's opposite-field hit off Hector Neris (2-2). Helped by two errors by Neris, the Mets scored two more runs in the inning.

He sent the game to the 11th with a tremendous defensive play. Jeff Francoeur's hard liner deflected off Torres' leg toward first base. Murphy made a diving stop before flipping a no-look toss toward the bag that was caught by a hustling Torres, who beat Francoeur by a half-step.

"You'll see it tonight if you turn on your TV," Collins said. "It will be shown many times."

Murphy credited Torres for staying with the play.

"I wasn't sure who was going to be there, but I flipped it anyway," he said.

Torres said extending his leg and running to cover the bag were just natural reactions.

"It just happened to hit my foot," he said. "I'm happy (Murphy) stayed at home."

Torres (5-5) pitched 2 1-3 scoreless innings, allowing one hit and striking out one.

Yoenis Cespedes, Kelly Johnson and Travis d'Arnaud homered for the Mets, who thrilled the large contingent of New York fans by sweeping the four-game series to give them nine straight wins over Philadelphia. New York remained 6 1-2 games ahead of Washington, a 4-2 winner over San Diego, in the NL East.

"The signs were pointing for us to win this game," Collins said.

New York has averaged 10.4 runs during their winning streak. The Mets outscored the Phillies 40-21 the series.

Philadelphia had a chance to win it in the 12th, but third baseman David Wright made an excellent defensive play on Andres Blanco's chopper with two outs and Cesar Hernandez coming home from third. Wright charged the ball, fielded it on a short hop and then gunned down Blanco to keep the Mets' hopes alive.

The Phillies scored five runs in the third to open the game's scoring.

Francoeur's two-run single and Ruf's opposite-field shot off Jonathon Niese highlighted the inning. Niese entered 5-0 with a 1.61 ERA in his last seven games against the Phillies, but he got a no-decision after allowing five runs and five hits in six innings.

But the Mets came back with two runs in the fourth on d'Arnaud's opposite-field drive before tying the game in the fifth on Cespedes' two-run homer to right and Johnson's solo shot to right. All three homers came off Aaron Harang, who gave up five runs and nine hits in six innings. Harang entered tied for the most losses in baseball with 14.

It was the sixth homer in seven games for Cespedes, who tied his career-high with his 26th of the season. He has 15 RBIs in the last seven games and is batting .303 with eight home runs and 23 RBIs with the Mets since they acquired him from Detroit on July 31.

The Mets set a franchise record for homers in a month with 43.

In the second inning, a woman sitting five rows off the field was hit in the forehead by a foul ball off the bat of Freddy Galvis of the Phillies. The team said she was evaluated and didn't need to go to a hospital.

Commissioner Rob Manfred talked at Citizens Bank Park before the game and said there was a chance that extra safety nets could be put up around the majors as early as next season.

Phillies: Catching prospect Jorge Alfaro singled and caught three innings in a rehab start for the Gulf Coast League Phillies on Thursday. One of the prospects acquired from Texas in the Cole Hamels trade, Alfaro had been sidelined since June 11 with a left ankle injury. ... LHP Elvis Araujo left with a left groin strain after throwing one pitch to Cespedes, the second batter he faced, in the 11th.