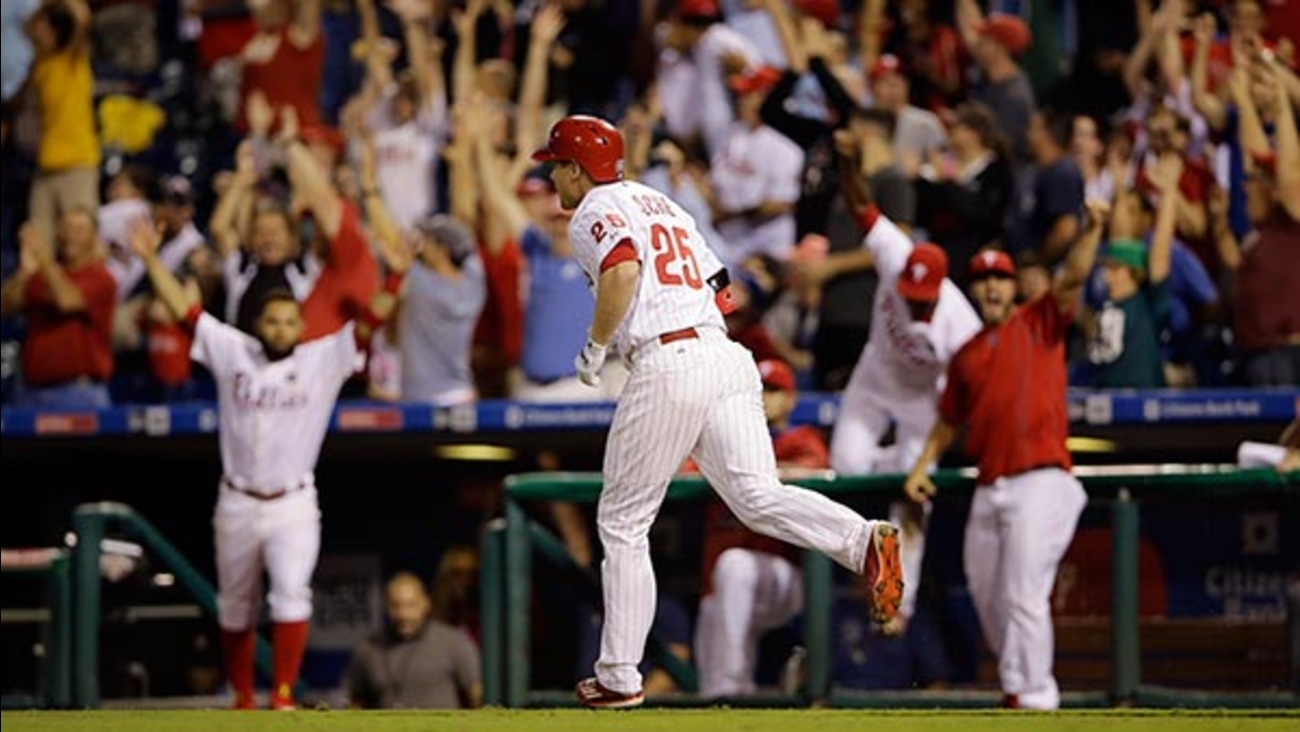 PHILADELPHIA -- Pinch-hitter Cody Asche hit a walk-off, two-run homer with two outs in the ninth inning to lead the Philadelphia Phillies to a 7-5 victory over the Chicago Cubs on Saturday night.

The Cubs dropped to three games back of Pittsburgh for the top NL wild-card spot with their second loss in their last nine.

Hector Rondon (5-4) got the first two outs of the ninth before walking Erik Kratz. Asche followed in the pitcher's spot and drove the first pitch into the foul pole in right field to help Philadelphia win for just the fifth time in the last 19 games.

Asche was mobbed by his teammates at home plate and doused with water. He got a bucket of fruit punch dumped on him along with a shaving cream pie in the face during a postgame TV interview.

Kyle Schwarber hit his third homer in two games, a solo shot in the third for Chicago.

Philadelphia took a 5-1 lead with five unearned runs with two outs in the seventh.

The trouble started for the Cubs when Andres Blanco hit a routine grounder to first. Anthony Rizzo fielded the ball cleanly, but lost control of it when he attempted to throw to first.

Ryan Howard, mired in a 1-for-36 slump entering play, tied the game with an RBI pinch-hit double to right. The Phillies took the lead when Justin Grimm walked pinch-hitter Darnell Sweeney with the bases loaded, and Cesar Hernandez cleared the bases with a double to left to put Philadelphia up four runs.

But Chicago tied it with four runs in the eighth off struggling relievers Luis Garcia and Jeanmar Gomez. Garcia started the frame and faced three batters without recording an out and then left after Chris Coghlan's two-run double pulled the Cubs within 5-3. Gomez surrendered an RBI double to Kris Bryant and Miguel Montero's sacrifice fly to center that tied the game.

Giles came on and struck out Addison Russell for the final out of the frame.

Jerad Eickhoff was solid in his fourth start with the Phillies since being acquired from Texas in the July 30 trade that sent ace Cole Hamels to the Rangers. He allowed one run on three hits in seven innings with eight strikeouts and three walks.

The game was delayed 50 minutes at the start due to rain.

Dan Haren was scheduled to make the start for the Cubs, but manager Joe Maddon pushed Haren back to Sunday due to the rainy forecast in order to keep him in a normal routine.

Travis Wood started the game and gave up three hits with five strikeouts and no walks. It was the eighth start in 46 appearances this season for Wood, who faced one batter in the fourth.

Phillies: 3B Maikel Franco continues to make progress in his attempt to return from a fractured left wrist before the season ends. Franco is hitting off a tee and soft toss. The Phillies are targeting Sept. 22 at Miami for his return.