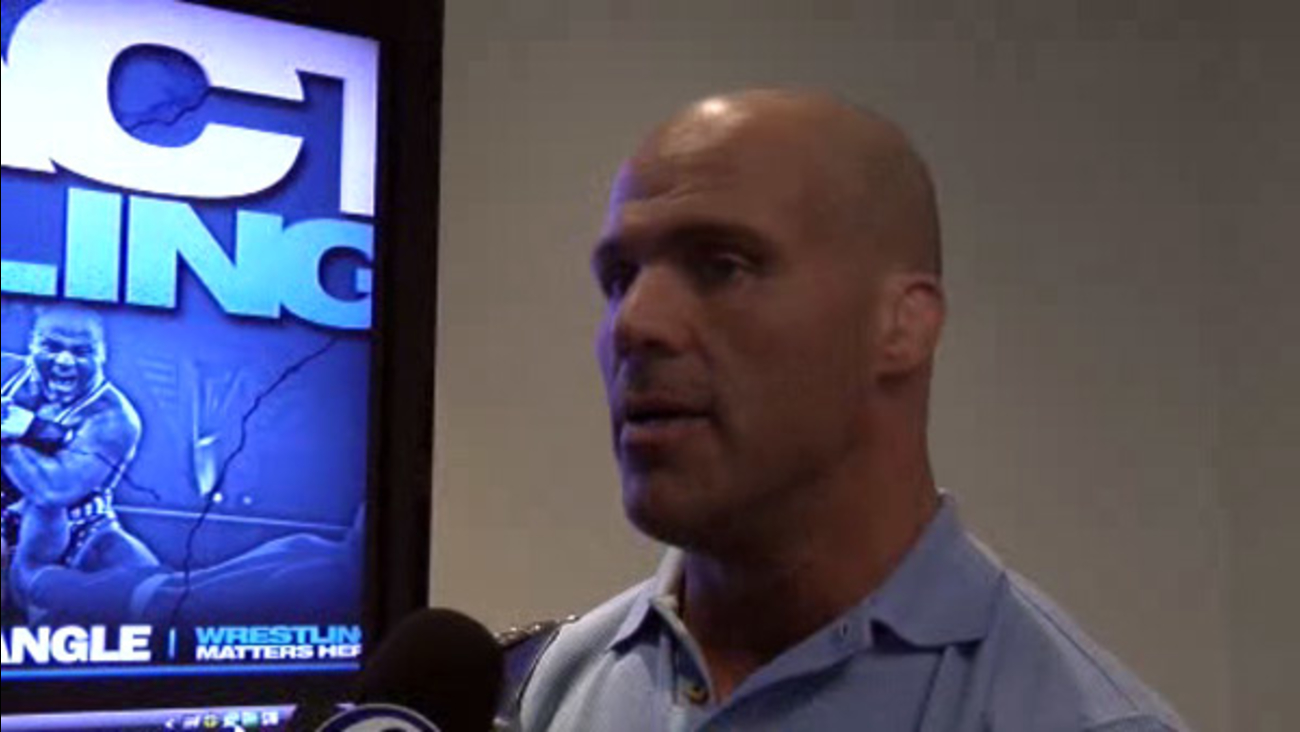 FILE - Kurt Angle at 6abc studios. Angle's brother has been jailed on charges he killed his wife during an argument about vodka at their home in the Pittsburgh suburbs.

PITTSBURGH -- The brother of pro wrestler and former Olympian Kurt Angle has been jailed on charges he killed his wife during an argument about vodka at their home in the Pittsburgh suburbs.

David Angle, 62, told Allegheny County homicide detectives that he began arguing with 57-year-old Donna Angle about 3 a.m. Sunday after she offered him some vodka.

"He told her he didn't want any, but she continued to badger him about drinking with her," detectives wrote in a criminal complaint. "He said all of their arguments revolved around alcohol and added that he has 'anger issues.'"

The suspect told police his wife tried to kick him during the argument, so he dragged her off a couch by grabbing both of her arms, then put his foot on her chest while continuing to pull her arms, the complaint said.

Angle said he couldn't remember how long he did that, but told police "it was not for minutes," the detectives wrote.

When his wife went unconscious and he couldn't revive her, Angle called 911 and was told how to perform CPR, police said. That happened about 6:20 a.m., according to the complaint.

Angle is one of four older brothers of Kurt, 46, who grew up in another suburb, Mount Lebanon. Kurt Angle was a two-time NCAA heavyweight wrestling champion at Clarion University and later won a gold medal in freestyle wrestling at the 1996 Summer Olympic Games in Atlanta.

Angle worked as a sportscaster for Pittsburgh's Fox TV news affiliate, before wrestling professionally with what was then known as the World Wrestling Federation, and other smaller promotions. He appeared at an Impact Wrestling show in Rostraver, about 25 miles southeast of Pittsburgh, on Saturday night.

Manager Dave Hawk said Angle typically visits with his "entire family" when he's in town but couldn't specify whether he spent any time with the suspect.

"At the present time, Kurt's just trying to support his family and help them work through this situation, this unforeseen and sad situation," Hawk said. "As you can imagine, it's very difficult to wrap your arms around a situation like this and manage everything."

Online court records don't list an attorney for David Angle, who was jailed without bond after his arraignment early Monday on a single count of criminal homicide. In nearly all circumstances, those charged with criminal homicide in Pennsylvania are not eligible for bond.

He faces a preliminary hearing Oct. 2.