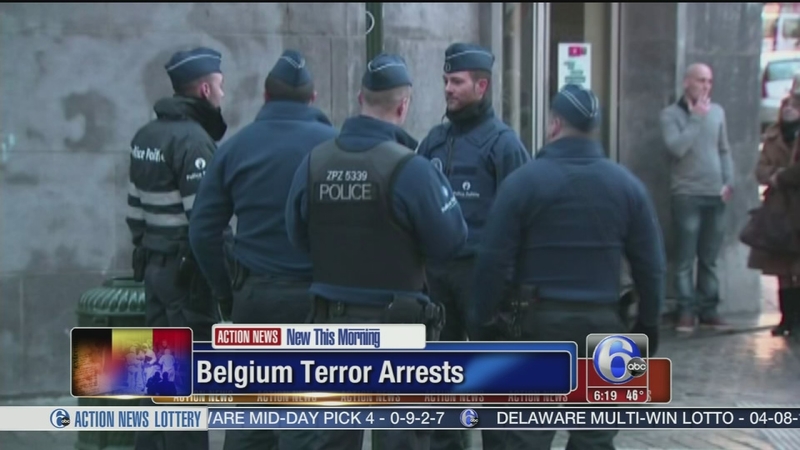 BRUSSELS -- Two people have been arrested in Belgium on suspicion of planning attacks in Brussels during the holidays, the federal prosecutor's office said Tuesday.

The investigation revealed "the threat of serious attacks that would target several emblematic places in Brussels and be committed during the end-of-year holidays," the prosecutor's office said.

A source close to the investigation said the Belgian capital's main square, thronged this time of year with holiday shoppers and strollers, was one of the suspected targets.

"On the Grand Place, there are a lot of people, as well as soldiers and police who are patrolling, as well as a police station nearby," said the source, who spoke on condition of anonymity because he was not authorized by the judge conducting the investigation to make public statements.

The two suspects, who the source said were male, were arrested following searches Sunday and Monday in the Brussels area, the Liege region and Flemish Brabant, the prosecutor's office said. It did not disclose their names or further information about them.

One was charged with acting as the leader and recruiter of a terrorist group planning to commit terrorist offenses, the other with participating in a terrorist group's activities as a principal actor or co-actor, the prosecutor's office said.

During the searches, military-type training uniforms, propaganda materials from the Islamic State group and computer material were seized and are being examined. However, no weapons or explosives were found, the prosecutor's office said.

Six people were taken in for questioning, but four were released, the office said.

The prosecutor's office said no additional details would be made public, but that the probe was not connected to the Nov. 13 attacks in Paris, in which numerous suspects, including presumed ringleader Abdelhamid Abaaoud and fugitive Salah Abdeslam, had connections to Belgium.

On Nov. 21, after the Paris attacks that killed 130 and injured hundreds, the terrorist alert level for all of the Belgian capital was temporarily raised to its maximum level.

Police and soldiers in Brussels have also been ordered to take special precautions to ensure their own safety, said Benoit Ramacker, spokesman for the Belgian government's Crisis Center.

Police and army patrols were greatly beefed up in Brussels following the Paris attacks, and Ramacker said a new official threat assessment conducted Monday evening after the latest searches and arrests concluded the officers and soldiers deployed to protect others from extremist attacks might become targets themselves "in the exercise of their functions."

Nine people suspected of links to the Paris attacks have also been arrested in Belgium, with the most recent arrest occurring Dec. 22. Belgium has also been one of the leading sources in Europe for foreigners recruited to fight for Islamic State and other extremist Islamic organizations.

On Jan. 15, Belgian anti-terrorism police targeting a group of returnees from Syria raided a house in the eastern city of Verviers, killing two suspected jihadis linked to Abaaoud, the leader of the Paris attacks, and arresting a third. Abaaoud, however, was not there.